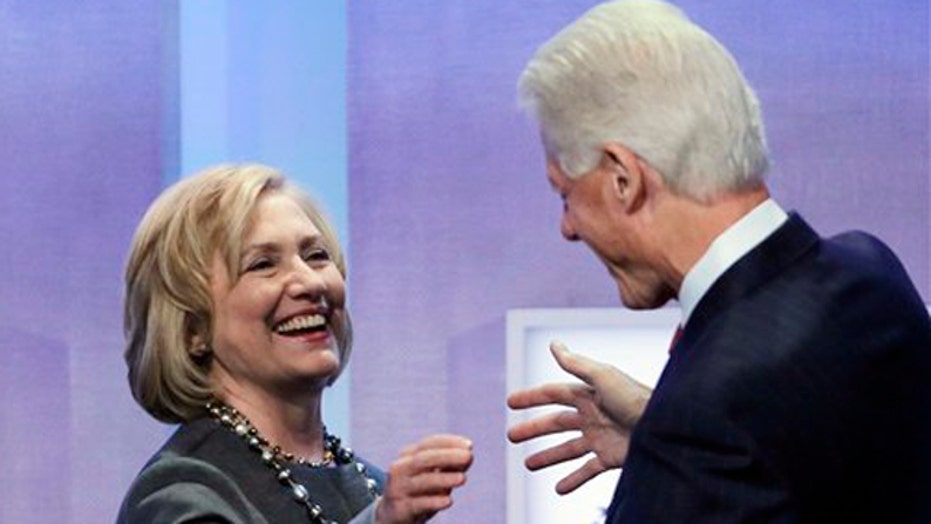 Former president scheduled to appear at only one campaign event

The Clinton camp was hit Friday with yet another bombshell report on the family foundation, even as the Democratic power couple launched a counteroffensive against critics of the foundation's dealings.

According to the report, Clinton agreed to accept a lifetime achievement award at the June 2014 gala, hosted by the Happy Hearts Fund, only after founder Petra Nemcova offered to give $500,000 to the Bill, Hillary and Chelsea Clinton Foundation.

Sue Veres Royal, the group's executive director at the time who was later "dismissed," alleged that this amounted to a "quid pro quo."

She told the Times the foundation had rejected an invitation from the Happy Hearts Fund "more than once." That changed, she said, when "there was a thinly veiled solicitation and then the offer of an honorarium."

Representatives for Nemcova and the foundation countered that the money was not solicited -- and would be used for projects in Haiti.

Royal received a cease-and-desist order Friday from legal representatives of the Happy Hearts Fund, saying that her contributions to the Times article amounted to a violation of a confidentiality agreement she had entered into.

"Unless HHF receives written confirmation from you by 11 A.M. tomorrow, May 30, that you will stop violating the Agreement, HHF intends to initiate a lawsuit against you for injunctive relief and damages," the order, seen by FoxNews.com, said.

The revelations are the latest to raise questions about possible favor-trading at the foundation, as Hillary Clinton mounts her run for the Democratic presidential nomination and her supporters try to tamp down controversy surrounding the family charity.

The fundraiser in question was initially meant to commemorate the 10th anniversary of the Indian Ocean tsunami -- Nemcova, a well-known Czech model, founded the charity after surviving the 2004 disaster, while in Thailand.

The Times reported that the fund first asked Bill Clinton to be an honoree in 2011, and again in 2013. They were turned down. But another invitation letter was reportedly sent in August 2013, offering to work around Clinton's schedule, and shifting the focus from Indonesia to Haiti.

The invitation added that the fund "would like to also share the proceeds of the event with the Bill, Hillary and Chelsea Clinton Foundation, committing at least $500,000 in partnership on a joint educational project in Haiti, of your selection."

The Times report pointed out that the foundation donation effectively rerouted money raised at the gala to an organization with a significantly larger budget. According to the Times, the $500,000 donation was worth almost a quarter of the event's net proceeds and could have funded the construction of several schools in Indonesia.

Charity experts told the Times it is rare for such honorees to get money from a gala's proceeds.

The former president and aides to Hillary Clinton, meanwhile, are pushing back on some of the critical reports surrounding the foundation.

On Friday, the former president said in a letter to supporters that the foundation remains a "non-partisan" philanthropy and he's determined to continue its mission.

The former president said in the letter that "it's the political season in America" and the impact of the organization has "largely been ignored" recently.

Top aides to Hillary Clinton also said late Thursday they see no permanent damage to her campaign over questions about the Clinton Foundation and other ethics issues, while acknowledging they expect an extremely competitive general election fought on other issues like the economy next year.

One top Clinton campaign official said they have a good story to tell about the philanthropic work of the Clintons and will make that case in the days ahead. The aides spoke at a briefing with reporters at Clinton's campaign headquarters in Brooklyn.