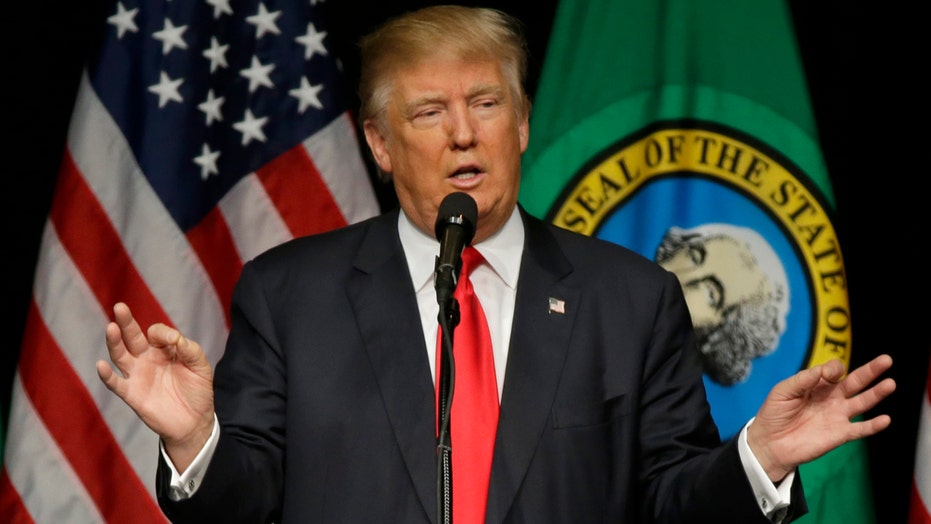 Trump: The world's a total mess; I can fix it, Hillary can't

Hillary Clinton, despite a nagging rival nipping at her heels, tried to turn the campaign to the general election in the wake of another primary loss – firing at presumptive Republican presidential nominee Donald Trump and labeling him “not qualified” to lead.

Clinton, as she tried to put her Bernie Sanders problem behind her, if only temporarily, also repeated a claim that Trump is being used as a “recruiter” for terrorists with his call for a temporary ban on Muslim immigration to the U.S. The remarks touched off a morning broadside from Trump, who hit back repeatedly Friday.

Trump, who was buoyed this week by a Fox News poll showing him edging Clinton, also called Clinton “unfit to serve” in an overnight statement. And he took to Twitter early Friday morning with a blizzard of put-downs on the heels of her critical interview.

Trump, on Fox News, also knocked Clinton’s vow to have her husband, former President Bill Clinton, handle job creation if she's elected. He said NAFTA, negotiated under his presidency, “has cleaned out our country of jobs.” And he quipped: “Maybe she just wants him around … so she can keep her eye on him.”

Trump has escalated his criticism of Bill Clinton’s past infidelity in recent days.

Clinton, speaking Thursday with CNN, said she would not engage with Trump on that front.

"No, I know that that's exactly what he's fishing for. I'm not going to be responding," Clinton said.

It was in that interview that Clinton went after Trump’s qualifications.

Clinton cited recent comments from Trump criticizing Great Britain, praising the leader of North Korea and questioning America's membership in the North Atlantic Treaty Organization, or NATO. She said she knows "how hard this job is" and added that she had "concluded he is not qualified to be president of the United States."

Looking ahead to the general election, Clinton also asserted that she "will be the nominee" for the Democratic Party, noting her lead in delegates and votes over Democratic opponent Sanders.

"That is already done in effect. There is no way that I won't be," said Clinton, who is 90 delegates short of clinching the nomination, though Sanders continues to win contests -- most recently, in Oregon -- and has vowed to march on to the Democratic convention in July. She declined to say whether she'd consider Sanders for her running mate if she wins the nomination.

Sanders spokesman Michael Briggs disputed the suggestion that the primary race was over.

"In the past three weeks voters in Indiana, West Virginia and Oregon respectfully disagreed with Secretary Clinton," he said in a statement. "We expect voters in the remaining nine contests also will disagree. And with almost every national and state poll showing Sen. Sanders doing much, much better than Secretary Clinton against Donald Trump, it is clear that millions of Americans have growing doubts about the Clinton campaign."

Trump, meanwhile, reiterated Friday that he plans to make his running mate announcement during the convention. Asked if former House Speaker Newt Gingrich is on the short-list, he said, “Absolutely,” and then added: “Anybody who supports me is on the short-list.”