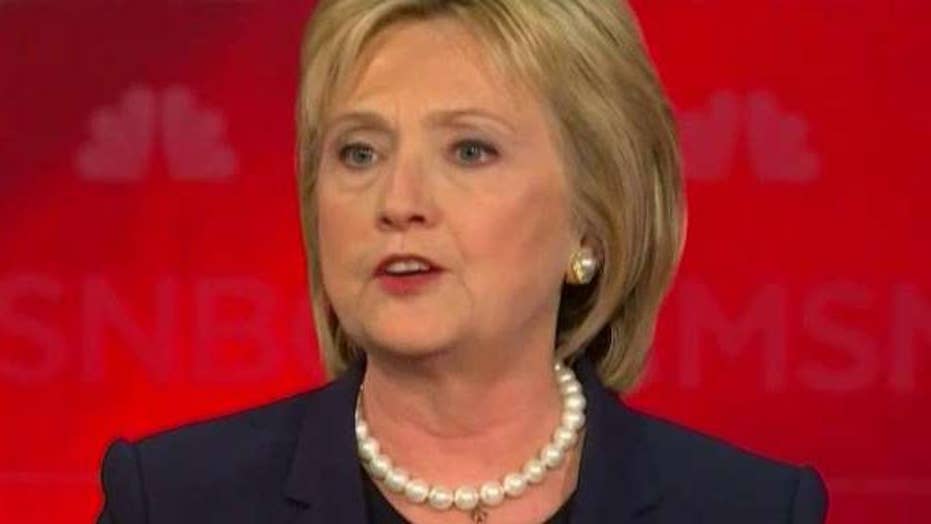 Clinton '100% confident' nothing will come of FBI probe

Hillary Clinton defiantly claimed at Thursday’s Democratic presidential debate that she is “100 percent confident” nothing will come of the FBI’s investigation of her email practices and has no concerns about the controversy’s impact on her chances in the race.

“I have absolutely no concerns about it whatsoever,” the former secretary of state said at the MSNBC-hosted debate in New Hampshire.

The comments come less than a week after the State Department confirmed that, as it releases thousands of Clinton emails, it is withholding 22 emails containing information too “top secret” to release.

In a statement, Powell said the emails were from his executive assistant. He said that while the department now has said they are "confidential," which is a low level of classification, both messages were unclassified at the time and there was no reason not to forward them to his personal account. Powell's office said two FBI agents visited Powell in December for a general discussion about email practices during his time at State.

Clinton pointed to those developments in arguing that those officials are now facing the same scrutiny she’s facing, suggesting investigators are going too far in their handling of the “absurd situation of retroactive classification.”

She dismissed the controversy as similar to Republican criticism of her over the Benghazi terror attacks.

Earlier, however, Rep. Darrell Issa, R-Calif., challenged the campaign’s “everybody did it” defense.

“The attempt to paint her predecessors in the State Department as equal offenders in mishandling classified material is an insult to what we now know to be the truth,” Issa said in a statement. “Official investigations have confirmed that Secretary Clinton’s unsecure server stored more than 1,000 emails containing classified information, including some classified at the very highest levels. Her guarantee to the nation that the number was zero now seems more like desperation than news cycle spin.”

“I will not politicize it,” he said.