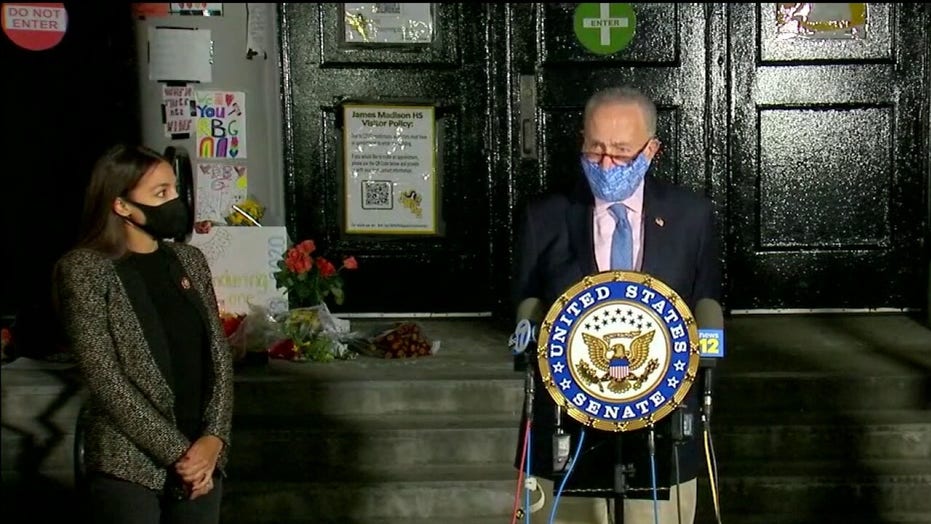 Senator Chuck Schumer claims 'everything is on the table;' Mike Emanuel has the latest.

“You ain’t doing s--t!” a man shouted, prompting the New York Democrat to stop talking and look up from his notes.

“Thank you,” Schumer replied, adding, “Democrats are fighting as hard as we can to protect Americans but we need Americans to continue to fight with us.”

SCHUMER: IF REPUBLICANS CONFIRM NEW JUSTICE THEY 'WILL HAVE STOLEN' 2 SCOTUS SEATS

During the news conference, which was held outside because of the coronavirus pandemic, Schumer added, “The American people don’t want Republicans to move forward with a confirmation. They know this is wrong.”

A new poll CNBC/Change Research poll released Tuesday showed 52% of likely voters in several swing states – Arizona, Florida, Wisconsin, Michigan, North Carolina and Pennsylvania -- think the winner of the Nov. 3 presidential  election should fill the vacancy and only 37% nationally believe Trump should be allowed to fill it during the "lame duck" period if he loses.

Democratic leaders have accused Senate Republicans of hypocrisy over their changing stance on whether the president should be allowed to have his Supreme Court pick confirmed by the Senate with just six weeks until the election.

McConnell defended his new position noting that Republicans were re-elected to a majority in the Senate in 2018. He has said that Trump's pick will get a vote this year and the Senate appears poised to attempt a vote before the election.

Schumer has also said that “everything is on the table” if Republicans push through a nominee before the election -- including adding justices to the Supreme Court if Joe Biden wins the White House and Democrats take control of the Senate.