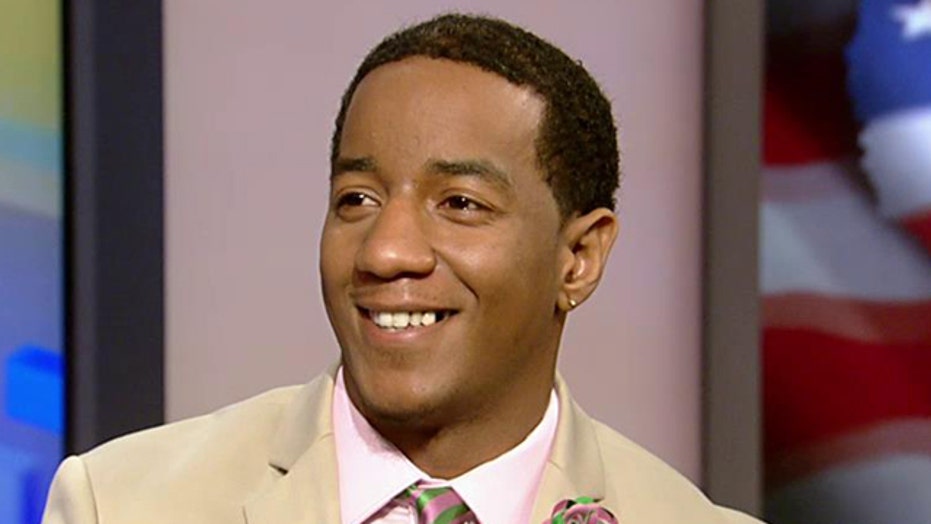 New Jersey Gov. Chris Christie announced Monday he pardoned a 24-year-old security guard of all criminal charges, after the man's arrest two years ago for carrying a legally-owned firearm made him a convicted felon.

"I feel so blessed," Steffon Josey-Davis told FoxNews.com Monday. "Gov. Christie knew in his heart this was the right thing to do."

When Josey-Davis was pulled over by police along a New Jersey road, the young security guard never imagined his legally owned gun would be confiscated.

"I feel so blessed. Gov. Christie knew in his heart this was the right thing to do."

Josey-Davis' nightmare began on the morning of Sept. 20, 2013, when he was preparing to leave his North Brunswick, N.J., home for a job as an armed security guard with Loomis Armored, a company responsible for transporting money to banks.

While unloading his 9mm Smith & Wesson handgun inside his car, his 6-year-old sister wandered into the family's garage, startling Josey-Davis. He quickly tucked the firearm inside the glove compartment and out of the child's view, according to his account.

Hours later, while driving at night with his girlfriend in Highland Park, he was pulled over. Josey-Davis says he was going below the speed limit.

Because he did not yet have a permit to carry the gun -- which was stored, still loaded, in the glove compartment -- he was arrested.

As a result, Josey-Davis had a criminal record and was unable to secure a job -- and his dreams of becoming a police officer are dashed. Josey-Davis sought a pardon from New Jersey Gov. Chris Christie after mounting a robust social media campaign, including a Change.org petition that has attracted more than 85,000 signatures to date.

"This is a case of a law-abiding citizen being turned into a criminal by New Jersey gun laws," Nappen told FoxNews.com in an interview last March.

Steffon Josey-Davis' dream of becoming a police officer could be back on, after NJ Gov. Chris Christie pardoned him for a gun charge.

Josey-Davis described the night of his arrest to FoxNews.com in detail.

He said that after he was pulled over, he reached into the glove compartment for the car's registration. He saw the gun, which he had forgotten about, and turned it over to the officers. They took it, issued him a citation for his registration -- which had expired that morning -- and let him go. They told him to return to the Highland Park Police Department the following Monday to retrieve his firearm, he claims.

Josey-Davis said he did as he was told, bringing with him his work credentials and receipts for the firearm. What happened next stunned him.

"They handcuffed me and charged me with unlawful possession of a firearm -- a second-degree felony," he said.

"I almost fainted. My life was ruined -- all my hard work went down the drain," said Josey-Davis, who had no criminal background and had passed rigorous security background checks for his job.

Josey-Davis had purchased the gun a month prior to his arrest at Meltzer's Sporting Goods in Garfield, N.J. While he legally owned the firearm, he had not yet secured a permit to carry it -- giving authorities just cause under state law to arrest him. Josey-Davis claims the pending permit was due to be approved the week he was arrested.

In February, Josey-Davis ended up taking a deal for a year of probation from the Middlesex County Prosecutor’s Office to avoid a sentence that could have carried up to 10 years in state prison. He pleaded guilty to second-degree unlawful possession of a weapon. As part of the deal, the prosecutor waived New Jersey's "Graves Act" and Josey-Davis is serving the probation.

But Nappen then challenged that criminal record.

Nappen claimed that between August 2013 and February 2014, the state had a firearm amnesty in effect, meaning individuals in similar situations were exempt from such charges.

"During that time there was amnesty and he should not have even been charged," claimed Nappen, who said the law during those months allowed for people to retain possession of a firearm "legally or illegally acquired."

"For whatever reason, this law didn't seem to be well known. The state police did a poor job at publicizing it," he said. "I think it's particularly striking that that wasn't raised."

"New Jersey's gun control laws are out of control," he said. "It's clearly evident they need serious reform. The legislature is really ultimately to blame."

In March, the Middlesex County Prosecutor's Office vehemently refuted Nappen's claim, saying, "There was no gun amnesty program that would apply under these circumstances."

In a statement to FoxNews.com at the time, Middlesex County Prosecutor Andrew Carey said Josey-Davis was stopped by police for driving a vehicle with an expired registration. He said that during the stop, Josey-Davis "gave four significantly different versions of the circumstances surrounding his illegal possession of the handgun.

"Additionally, he said he worked for an armored car company, but he did not possess a license to carry the weapon, which was seized as evidence," Carey said.

Carey said he was charged with "having a handgun in the glove compartment of his vehicle" – and that the law stipulates drivers can only transport a gun, unloaded, in the trunk. (Josey-Davis' attorney, though, clarified that his client was specifically charged over the permit issue.)

"Describing his conduct as a simple mistake does not negate the seriousness of this law, which was created to protect police officers and the public," Carey continued. "Illegal gun possession is a second-degree offense, punishable by a prison term of multiple years. This defendant agreed to plead guilty and was placed on probation for one year."

New Jersey gun control advocates claim the law is well-intended and should not be changed in response to exceptional cases such as that of Josey-Davis.

"We think the law needs to take into consideration individual circumstances, but it's still a law that's for the well being of the people of New Jersey," said Rev. Robert Moore, executive director of the Princeton-based group, Coalition for Peace Action, which oversees the gun control project known as "Ceasefire NJ."

"It sounds like these officers were doing their job," Moore told FoxNews.com. "It's up to the courts to decide some kind of leniency given the circumstances."

He added: "We would be against changing the law because of these exceptional circumstances. ... That’s one reason you go before a judge. The law itself should not be changed."

Josey-Davis said Monday he plans to help others who find themselves in similar situations.

"I’m going to encourage other people in the same situation and tell them there’s always hope and never to give up," he said. "I am so thankful I can move on with my life."