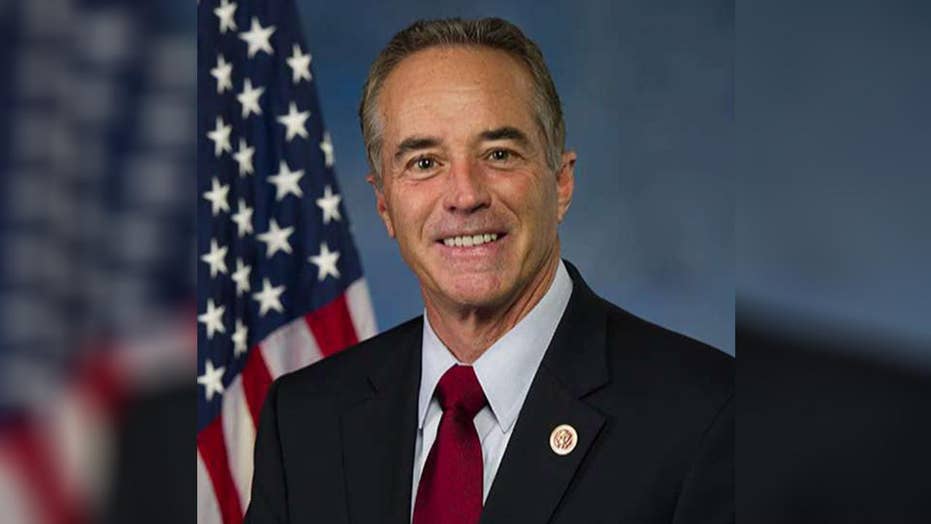 The New York Republican, his son and his son's fiancée's father are taken into custody by the FBI.

A federal judge on Friday sentenced former Rep. Chris Collins, R-N.Y., to 26 months in prison after he pleaded guilty to insider trading charges one day after resigning from Congress last year.

Collins, 69, spoke for about 15 minutes in court Friday, growing emotional as he apologized to his family and constituents.

“I stand here today as a disgraced former member of Congress,” he said. “My life has been shattered.”

The Department of Justice had recommended Collins receive the maximum sentence for his conviction on one count of conspiring to commit securities fraud. But U.S. District Court Judge Vernon S. Broderick sentenced Collins to a lesser sentence than the guideline of 46 to 57 months. The former congressman was ordered to report to the federal prison in Pensacola, Fla. on March 17.

Collins' attorneys had bid for a sentence of probation, with a term of home confinement, community service and a substantial fine. They cited his contrition, advanced age, charitable works and a low chance that he would commit any more crimes.

"Society, as a whole, will gain no benefit from incarcerating a 69-year-old husband, father, and grandfather," the sentencing memo said.

“This is a sad and tragic day for Chris and his family,” defense attorney Jonathan Barr said. “He stands before you humbled, penitent and remorseful.”

Federal investigators said Collins provided non-public information about biotechnology company Innate -- where he sat on the board -- to his son Cameron, tipping him off in June 2017 that a drug the company was working on had failed a clinical trial so that Cameron could sell his shares before the stock price went down. Collins was at a Congressional Picnic at the White House when he learned the news, prosecutors said.

Prosecutors also said that Collins and his son were worth a total of $35 million at the time they conspired to sell the shares, a move they said enabled Cameron Collins and his friends to avoid $800,000 in losses. According to the government, Collins then conspired with family members to claim Cameron Collins and friends sold shares because they were spooked by a temporary halt in the trading of the stock rather than because they knew the stock price would fall 92 percent for the company headquartered in Sydney, Australia, with offices in Auckland, New Zealand.

Assistant U.S. Attorney Max Nicholas disputed the defense claim that the crime was the result of a tragic and emotional moment when Collins wasn’t thinking straight after learning the drug trial failed. The prosecutor noted there was a 10-month gap between his first crime when he called his son and the second when he lied to the FBI, which described as Collins “doubling down.”

"We do not agree this crime was emotional,” Nicholas said.

"Lawmakers bear the profound privilege and responsibility of writing and passing laws, but equally as important, the absolute obligation of following them," Manhattan U.S. Attorney Geoffrey Berman said in a statement. "Collins’s hubris is a stark reminder that the people of New York can and should demand more from their elected officials, and that no matter how powerful, no lawmaker is above the law."

Broderick called it baffling that Collins would exercise such poor judgment when he and his son had the financial means to deal with any loss. “I have a difficult time reconciling that,” the judge said.

"It was a stupid, impulsive action that doesn’t make sense,” Barr, Collins' defense attorney, responded. “He really thought this company had something that was going to be a magic bullet for somebody with a really serious illness.”