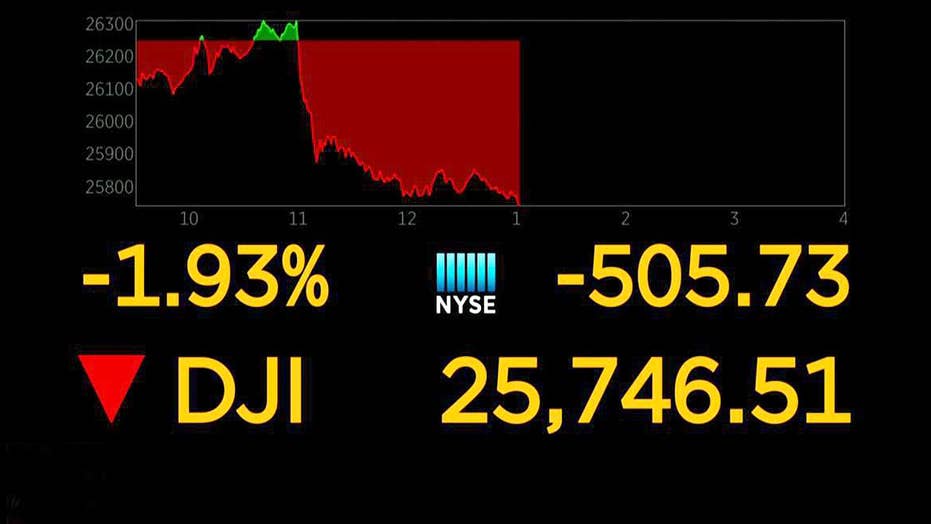 CHINA COUNTERPUNCHES ON TARIFFS, RECESSION FEARS GROW
AP: “The U.S. has said it plans to impose 10% tariffs on $300 billion of Chinese goods in two steps, on Sept. 1 and Dec. 15. China on Friday announced new tariffs on $75 billion of U.S. products in retaliation for those tariffs, deepening a conflict over trade and technology that threatens to tip a weakening global economy into recession. China also will increase import duties on U.S.-made autos and auto parts, the Finance Ministry announced. The announcement comes as leaders of the Group of 7 major economies prepare to meet in France this weekend. Tariffs of 10% and 5% will take effect on two batches of goods on Sept. 1 and Dec. 15, the ministry said in a statement. It gave no details of what goods would be affected but the timing matches Trump’s planned duty hikes.”

Trump: Americans ‘hereby ordered’ to shun business with China - Politico: “President Donald Trump on Friday used a tweet to order U.S. companies to find an alternative to doing business with China, as he lashed out at Beijing's latest round of retaliatory tariffs and pledged to respond to them later in the day. It was unclear exactly what Trump meant with the order or how much force it has, but the tweets captured the president's frustration as his escalating trade war with China weighs on the economy and heightens the risk of a recession during an election year. … [Trump tweeted], ‘Our great American companies are hereby ordered to immediately start looking for an alternative to China, including bringing your companies HOME and making your products in the USA. I will be responding to China’s Tariffs this afternoon. This is a GREAT opportunity for the United States.’”

Campaign urges female supporters to go public - AP: “The Trump campaign has a message for its female supporters: It’s time to come out of hiding. ‘There’s a lot of people that are fearful of expressing their support, and I want you ladies to know it’s OK to have felt that way, but we need to move past that or the Democrats win,’ said Tana Goertz, a Trump campaign adviser, at an Iowa ‘Women for Trump’ event on Thursday. The Iowa event, held in the back room of a barbecue joint in a Des Moines suburb, was one of more than a dozen in battleground states nationwide as part of a push to make the president’s case on the economy and train volunteers. … But polling suggests his challenges persist. The most recent Associated Press-NORC Center for Public Affairs Research poll found just 30% of women approve of the way the president is doing his job, compared to 42% of men. Notably, there was no gap between Republican men and women — 80% of both groups said they approved of his job performance in the August poll.”

TIME OUT: A FULL PLATE
Smithsonian: “Stegosaurus is one of the most popular and well-known dinosaurs, identifiable by the diamond-shaped plates marching down its back from the base of its neck to the end of its spiky tail. A new specimen unearthed in the mountains of Morocco shows that the prehistoric species is much older and more geographically wide-ranging than paleontologists previously believed. The specimen, which is thought to represent a new species and genus of stegosaurs, was identified by a team led by Susannah Maidment of the Natural History Museum in London, reports the Press Association. The fossils found in Morocco’s Middle Atlas Mountains only include a few vertebrae and an upper arm bone, but it was enough to identify the bones as belonging to one individual stegosaur.”

MOULTON DEPARTS, WARNS DEMS ON LEFT LURCH
NYT: “Representative Seth Moulton of Massachusetts is dropping out of the presidential race, ending a candidacy that emphasized Mr. Moulton’s centrist politics and military service but gained no traction with Democratic primary voters. Mr. Moulton, 40, said in an interview that he had no immediate plans to endorse another candidate, but he warmly praised former Vice President Joseph R. Biden Jr. … Mr. Moulton suggested that most of the other Democratic candidates were also laboring in vain at this point, with only a tiny few – Mr. Biden and Senators Elizabeth Warren and Bernie Sanders – remaining as real competitors for the nomination. He warned in the interview that if Democrats were to embrace an overly liberal platform, it could make it harder for the party to defeat President Trump. ‘I think it’s evident that this is now a three-way race between Biden, Warren and Sanders, and really it’s a debate about how far left the party should go,’ Mr. Moulton said.”

Bernie worries Dems with big green spending proposal - WaPo: “Sen. Bernie Sanders proposed a $16.3 trillion climate plan Thursday, an expansive blueprint meant to enlarge American ambitions on combating planetary warming in a presidential campaign already marked by aggressive Democratic approaches. … Averaging more than $1.6 trillion a year for 10 years, the new program would dwarf the entire annual U.S. discretionary budget, which was about $1.3 trillion in 2018, and would amount to more than double the current military budget. … The proposal fits Sanders’s pattern of staking out positions that mark the liberal edge of the Democratic field. The strategy risks alienating centrists in the primary and general elections, but it could also boost Sanders’s self-depiction as the true revolutionary in the field.”

Liberals pounce on Harris’ abandonment of Medicare for all - Politico: “Kamala Harris offered her health care plan expecting to bridge the party’s divides and decisively answer doubts about her see-sawing positions. But in the month since, the California Democrat is still struggling to rebut attacks from her chief rivals who are poking holes in its specifics… Harris’ universal coverage plan has been praised by more than a dozen health policy wonks and former Obama administration officials, including some who prefer it to Sanders’ version of Medicare for All. But politically, it's been a muddle: It's testing whether a senator not known for her health care expertise has the dexterity to thread the needle between Sanders and Biden on a complicated policy. And it’s accelerated questions about why Harris supported Sanders’ plan for nearly two years, standing with him at the 2017 unveiling, before admitting this week to long harboring doubts about the Vermont senator’s proposal.”

Biden goes all in electability - WaPo: “Joe Biden, his wife and his entire campaign apparatus have put an electability argument front and center this week in an attempt to dispel any lingering concerns among Democrats about his ideology, his age or his verbal mistakes. While acknowledging that many in the party don’t agree with him — and that he may not excite them — they are attempting to make the case that he is the Democrat best positioned to defeat President Trump. … Electability is the point of his first campaign ad, now airing across Iowa. It includes a graphic showing four polls in which Biden handily defeated Trump. …  As the Democratic primary campaign trundles on, Biden is winning polite applause from audiences that respect him but clearly are not as fired up by his presence as are crowds for other candidates. He has made verbal miscues nearly daily as his more disciplined opponents hew closely to their chosen messages.”

POMPEO, EYING POSSIBLE SENATE RUN, NUZZLES DONORS
NYT: “[On] a trip on Tuesday to New York, Secretary of State Mike Pompeo met with Ronald S. Lauder, the cosmetics heir and billionaire Republican donor, two people briefed on the meeting said, speaking on the condition of anonymity to describe a closed-door gathering. He then met with a conservative group, the Committee to Unleash Prosperity, which routinely hosts events with prospective candidates. That meeting included Steve Forbes, the chairman of Forbes Media; the economist Arthur B. Laffer; and John A. Catsimatidis, a former New York City mayoral candidate. Mr. Pompeo’s itinerary gave only more credence to the regular talk in Washington that Mr. Pompeo was seriously weighing a run for Senate from Kansas, a step favored by Republicans worried about holding the seat next year but one that would leave a hole in the top ranks of President Trump’s national security team.”

Kansas congressman under pressure to resign - Topeka [Kan.] Capital-Journal: “Kansas Republican U.S. Rep. Steve Watkins declined to answer news reporters’ questions at a campaign event Thursday amid a flurry of bipartisan speculation his career in Congress could come to an abrupt end after eight months in office. Instead, he bolted into a waiting vehicle and sped away. Republicans in Kansas and Washington, D.C., were pressuring Watkins to step down, but the reason for the possible resignation wasn’t certain. Jim Joice, the spokesman for Watkins, said there would be no resignation. … Watkins narrowly defeated Democrat Paul Davis during a turbulent 2018 campaign in which questions were raised about Watkins’ military service and his treatment of women in Kansas, Alaska and elsewhere. The Topeka Capital-Journal reported he was dating women in Topeka during the campaign while engaged to be married and after he was wed, and identified a Wasilla, Alaska, resident who accused Watkins of unwanted sexual advances. Watkins called the allegations ‘preposterous.’”

AUDIBLE: DID WE CATCH A NINER IN THERE?
“There aren’t that many fun facts about me. There really aren’t that many fun non-facts about me. I made a D in my last math class in high school, never took one in college, have not taken one since and continue to believe that 0 x 3 = 0, but 3 x 0 = 3.” – Former Rep. Trey Gowdy, R-S.C., in a birthday edition interview with Politico Playbook on Thursday.

ANY GIVEN SUNDAY
Tune in this weekend as Mr. Sunday sits down with Treasury Secretary, Steven Mnuchin and Sen. Amy Klobuchar, D-Minn. Watch “Fox News Sunday with Chris Wallace.” Check local listings for broadcast times in your area.

FROM THE BLEACHERS
“One last comment concerning Marsha Carpenter’s position [from Thursday’s Halftime Report audible] to vote for any presidential candidate, as long as they’re a Democrat. I can appreciate her position. In 2016, my thoughts were much the same. I often stated that I would vote for anyone, or anything, not named Hillary Clinton…even a pencil, because at least it had a point. See, two can do sarcasm!” –Paul K. Schnier, Shoreham, N.Y.

THAT ESCALATED QUICKLY
The Guardian: “It all started on Monday when Fraser Harvey walked into his local cafe in Melbourne [Australia’s] city centre. To mark his constant visits to the Sensory Lab outlet on Collins Street, he put up a small poster that crowned him as its favourite customer. … Two hours after Harvey put up his picture, he returned to find someone had usurped him. A framed certificate claimed an anonymous rival was ‘Customer of the week (Every week)’. …Harvey returned with his own frame – an even bigger one. But then his tormenter-in-chief obtained equipment to project her face over the entire store. On Thursday Harvey told Guardian Australia he had finally put a stop to the madness – by printing cards for the Fraser Harvey Memorial Coffee Loyalty Programme, and crafting shirts for the staff with his face on them. … But on Friday Fraser’s foe unveiled her masterstroke – a permanent tattoo of a Sensory Lab coffee cup. Revealing her identity as Harriet Noall – an urban planner who works above the cafe – she told Guardian Australia she was now clearly the cafe’s favourite customer.”