Ocasio-Cortez' remarks made during an Instagram live-stream Tuesday also disrespect history and disregard what happened during the Holocaust, Cheney said Tuesday on "The Story."

"It's a total disregard to the facts, in particular about the Holocaust, but also you see the extent to which her colleagues and the people who are supposed to be leading the Democrats in the House - Speaker Pelosi, Steny Hoyer - won't stand up and criticize what she's saying and condemn those comments," the House Republican Caucus chairwoman said.

"I'm waiting for her fellow freshmen, I'm waiting for the leaders of her party to stand up and say they disagree because certainly, they ought to disagree. It was a shameful set of remarks."

ALEXANDRIA OCASIO-CORTEZ: THE U.S. IS RUNNING CONCENTRATION CAMPS ON OUR SOUTHERN BORDER

Cheney claimed some Democratic lawmakers have previously cast aside historical context to make a political point, but Ocasio-Cortez takes such action to the next level.

"We've had a long history, if you go back, at people who are left-wing zealots ignoring history, ignoring facts, to pursue their causes," she claimed. 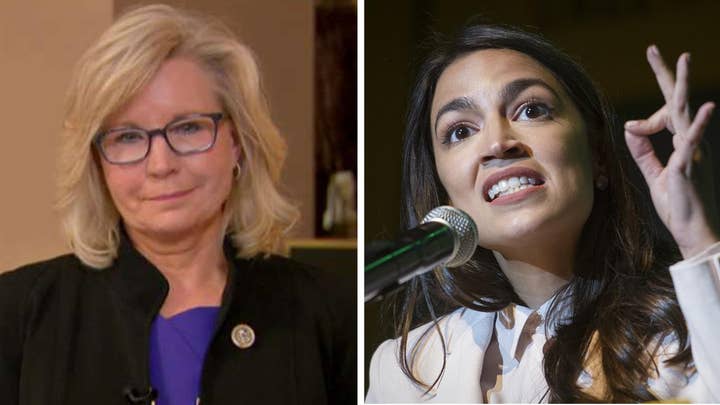 "What's new is that we have that going on from a member of Congress who really seems to have become the intellectual leader of the Democrats in the House."

"We should never be in a situation where someone is bringing up the Holocaust in this public discourse, particularly diminishing what has happened, particularly demeaning the memories of people who are lost."

In her remarks, Ocasio-Cortez strongly criticized the presence of such detention centers.

"That is exactly what they are. They are concentration camps," she said.

Earlier in the day, Cheney and Ocasio-Cortez traded barbs on Twitter.

"And for the shrieking Republicans who don’t know the difference: concentration camps are not the same as death camps," Ocasio-Cortez wrote to get things rolling. "Concentration camps are considered by experts as 'the mass detention of civilians without trial.' And that’s exactly what this administration is doing."

Cheney responded shortly after: "Please @AOC do us all a favor and spend just a few minutes learning some actual history. 6 million Jews were exterminated in the Holocaust. You demean their memory and disgrace yourself with comments like this."

Not to be outdone, Ocasio-Cortez quickly returned serve at her Republican counterpart.

"Hey Rep. Cheney, since you’re so eager to 'educate me,' I’m curious: What do YOU call building mass camps of people being detained without a trial? How would you dress up DHS’s mass separation of thousands children at the border from their parents?" she tweeted.

Rep. Cheney then replied: "Happy to help educate you @AOC. You could start with the @yadvashem survivor testimonies. I also recommend Night by Elie Wiesel. Here’s an Amazon link to make it easy for you to purchase."