CARACAS, Venezuela (AP) – Police in camouflaged uniforms smashed into the office of Caracas Mayor Antonio Ledezma on Thursday and carried the opposition leader away in a move heightening political tensions in the socialist-run South American country.

President Nicolas Maduro announced that Ledezma, one of his most vocal critics, would be punished for his efforts to sow unrest. 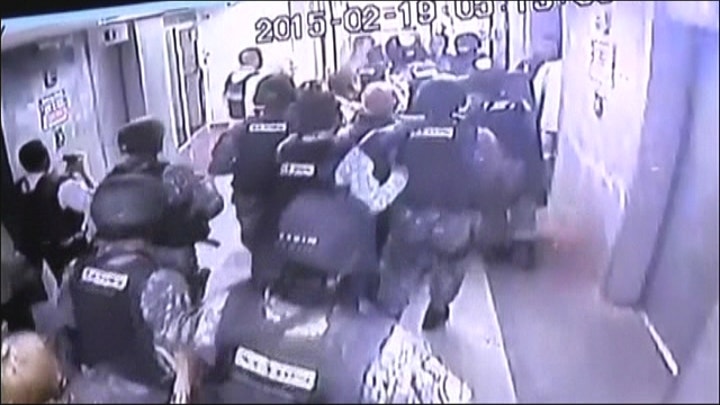 Reports of the detention set off protests around the city, where people spontaneously banged pots from their windows or tapped rhythms on their car horns amid rush hour traffic. As night fell, a few dozen gathered to vent their anger in front of the headquarters of the intelligence service police where Ledezma is believed to be held.

"He'll be held accountable for all his crimes," Maduro said in comments that TV and radio stations across the country were required to carry.

Last week, Maduro named Ledezma among government critics and Western powers he accused of plotting a coup to bring down his socialist government, one of more than a dozen such denunciations Maduro has made since taking power in 2013. Ledezma mocked the accusation in multiple interviews, saying the real destabilizing force in Venezuela was the government's corruption.

Tensions have been running high in Venezuela this week, with the one-year anniversary of the start of weeks of anti-government street protests that choked the country with tear gas and smoke from flaming barricades and resulted in more than 40 deaths. National police arrested several other mayors and former mayors during last year's unrest, including Leopoldo Lopez, who is considered by human rights groups as Latin America's most high-profile political prisoner.

Allies of the 59-year-old mayor called for more protests Friday to demand his immediate release, a call echoed by Human Rights Watch.

The U.S. State Department called Venezuela's accusations of coup-plotting "baseless and false" and intended to direct attention away from mounting economic problems such as widespread shortages and galloping inflation that reached 68 percent last year.

"The Venezuelan government needs to deal with the grave situation it faces," the State Department said in a statement.

Ledezma has been a thorn in the side of the ruling party since he won the mayorship in 2008, beating out a member of the socialist party led by the late President Hugo Chavez.

The government subsequently transferred nearly all of Ledezma's powers, including control of police and schools, to a newly created government entity. Ledezma responded with a hunger strike that drew international attention and cemented his status as symbol for what the opposition calls the government's efforts to marginalize elected officials who do not fall in line.

His arrest was captured on surveillance video, clips of which rocketed around social media. A group of men in black and gray camouflage, wearing bulletproof vests, can be seen forcefully hustling the 59 year-old politician from his building.

A member of Ledezma's security team, who was not authorized to give his name, said the armed officers, some of them wearing masks, used their weapons to break the door to the mayor's office and haul him away.