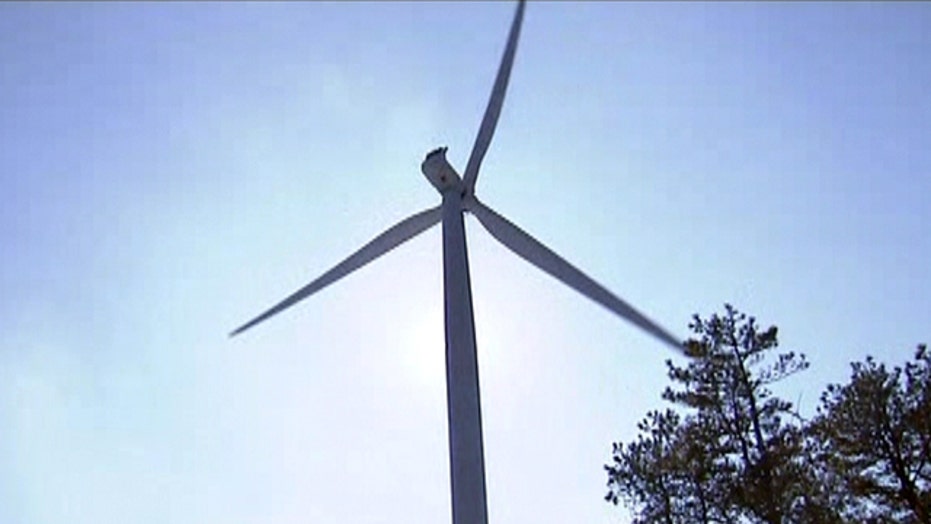 Two wind turbines towering above the Cape Cod community of Falmouth, Mass., were intended to produce green energy and savings -- but they've created angst and division, and may now be removed at a high cost as neighbors complain of noise and illness.

"It gets to be jet-engine loud," said Falmouth resident Neil Andersen. He and his wife Betsy live just a quarter mile from one of the turbines. They say the impact on their health has been devastating. They're suffering headaches, dizziness and sleep deprivation and often seek to escape the property where they've lived for more than 20 years.

"Every time the blade has a downward motion it gives off a tremendous energy, gives off a pulse," said Andersen. "And that pulse, it gets into your tubular organs, chest cavity, mimics a heartbeat, gives you headaches. It's extremely disturbing and it gets to the point where you have to leave."

The first turbine went up in 2010 and by the time both were in place on the industrial site of the town's water treatment facility, the price was $10 million. Town officials say taking them down will cost an estimated $5 million to $15 million, but that is just what Falmouth's five selectmen have decided to move toward doing.

"The selectmen unanimously voted to remove them. We think it's the right thing to do, absolutely," Selectman David Braga said. "You can't put a monetary value on people's health and that's what's happened here. A lot of people are sick because of these."

Now the matter will go to a town meeting vote in April and could ultimately end up on the ballot during the municipal elections in May.

"It's highly likely that what the voters will be determining is are they willing to tax themselves at an appropriate amount to cover the cost and dismantle and shut down the turbines?" Falmouth Town Manager Julian Suso said.

In the meantime, the turbines are being run on a limited schedule as the selectmen respond to the concerns of nearby neighbors. The turbines only run during the day -- from 7 a.m. to 7 p.m. -- which means they're operating at a loss.

The dispute has been a bitter three-year battle in the seaside town where officials argue the project was thoroughly vetted, researched and put to public vote multiple times.

"To say 'let's let the voters decide' -- it sort of flies in the face of what we went through all these years," said Megan Amsler of the Falmouth Energy Committee.

"We never tell somebody 'hey, you're going to have to take that coal plant down or you're going to have to stop mining the mountain tops.' These are very visible and a lot of other ways that we get our energy are invisible to the average American," Amsler argued. "People don't even know how much energy they consume on a yearly basis so I think it's good for people to be able to see where their energy comes from and know that it's coming from a clean source."

"I think if we end up taking these turbines down it will be a shame. It will be an embarrassment for the Town of Falmouth," said Amsler.

Town leaders say the state bears some monetary responsibility for the situation because Falmouth was granted renewable energy credits and received advice from state level energy officials through an ongoing partnership.

"They certainly have been involved and have a tremendous stake in this process," said Assistant Town Manager Heather Harper. Harper said the Mass Clean Energy Center "provided the technical assistance to conduct all of the feasibility studies."

"I feel the state is responsible because they were really pushing for more wind power which, believe me, the whole board of selectmen are supportive of renewable energy. I am. Maybe wind, but not in this location," said Braga.

Ultimately, town leaders are hoping the controversy will be resolved and the community will find a way to move forward together.

"It's imperative to the community that we do have a coming together and a healing and find a resolution one way or the other," said Suso. His advice to communities considering a similar project to the one causing strife in Falmouth is "move cautiously, communicate well, have extreme public dialogue and listen well."