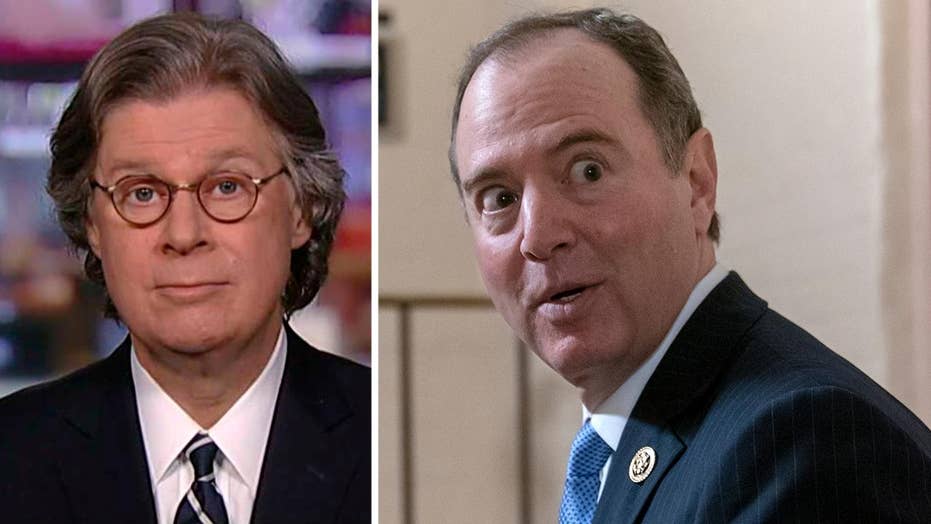 Democrats are beginning to move away from the Mueller report, but there is “zero chance” Rep. Adam Schiff, D-Calif., steps down from the House Intelligence Committee, according to the Washington Examiner’s chief political correspondent.

“I think there’s zero chance, zero chance that Adam Schiff would step down as chairman of the House Intelligence Committee but what we’re seeing on Capitol Hill now is Democrats are walking back from the whole collusion accusation that they have been making for two years,” Byron York said on “America’s Newsroom.”

“Nancy Pelosi had a meeting with top Democrats Monday night and they decide to drop the whole collusion thing and move on to their legislative agenda.”

York believes the Democrats will allow investigations to continue but emphasize their agenda.

“So, what they will do, I think, is compartmentalize their investigations.  So, the investigative chairmen, Nadler, Schiff, Cummings will conduct those investigations but the House leadership is going to talk about health care, rural broadband and all sorts of other issues and try to act like some of this never happened,” York told co-host Bill Hemmer.

York also reacted to President Trump’s tweet Tuesday attacking the Democrats and the media for the Mueller investigation while Republicans try to get to the bottom of how it all began.

“The Mainstream Media is under fire and being scorned all over the World as being corrupt and FAKE. For two years they pushed the Russian Collusion Delusion when they always knew there was No Collusion. They truly are the Enemy of the People and the Real Opposition Party!” Trump tweeted.

“The president is not going to let this go.  He was falsely accused for two years on this and he has now been exonerated on the issue of collusion and he’s going to talk about all those people who falsely accused him at that time,” York said.

“Republicans are going to try and find out how did all this get started because we still don’t really know what happened. And the whole dossier issue is going to be explored more.  We haven’t really heard from Christopher Steele, we know that Robert Mueller interviewed him by the way.  Don’t know what was said.”