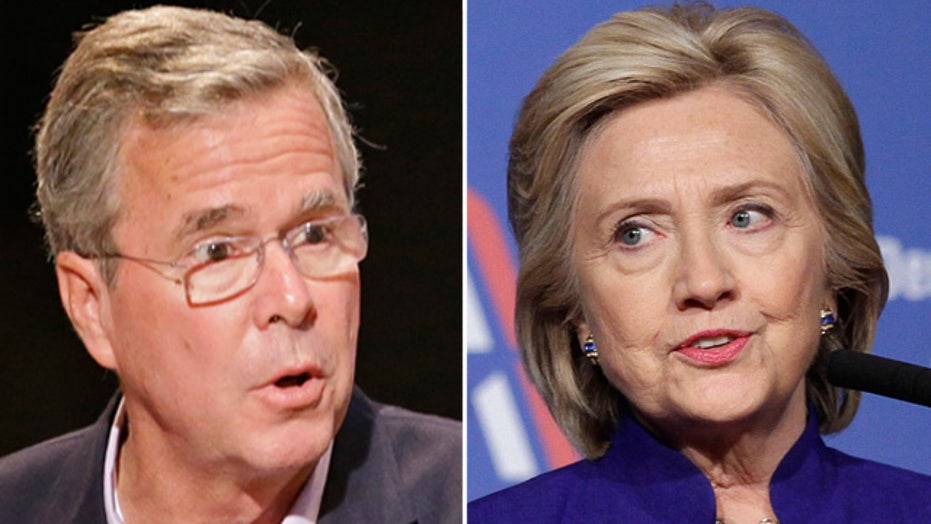 Republican presidential candidate Jeb Bush took heat Tuesday from Hillary Clinton, the Democratic 2016 front-runner, for remarks he made in which he promised to cut off federal funding to Planned Parenthood if elected president, adding, “I’m not sure we need half a billion dollars for women’s health issues.”

The former Florida governor's remarks come amid a flurry of videos released by the activist group Center for Medical Progress that show Planned Parenthood executives discussing the harvesting of fetal body parts, how the procedure can be altered to keep certain organs intact, and discussing pricing for certain specimens and parts.

Bush spoke about the scandal before a meeting at the Southern Baptist Convention in Nashville, Tenn.

“The next president should veto Planned Parenthood,” Bush said to a loud ovation at the packed Bridgestone Arena.

Shortly after, Bush released a statement saying he misspoke and clarifying his remarks.

“With regards to women’s health funding broadly, I misspoke, as there are countless community health centers, rural clinics, and other women’s health organizations that need to be fully funded. They provide critical services to all, but particularly low-income women who don’t have the access they need,” Bush said.

“I was referring to the hard-to-fathom $500 million in federal funding that goes to Planned Parenthood -- an organization that was callously participating in the unthinkable practice of selling fetal organs. Democrats and Republicans agree we absolutely must defund them and redirect those funds to other women’s health organizations," Bush said

The Republican 2016 hopeful also fired back at Clinton on Twitter.

While federal money is barred from paying for abortions, except for cases of rape, incest or when a woman's life is in danger, Republicans have sought to defund the controversial organization entirely.

The Senate on Monday voted 53-46 to advance a GOP-backed bill terminating Planned Parenthood's federal funding, seven short of the 60 votes needed to keep the measure moving toward passage.

Florida Sen. Marco Rubio, who spoke in a pre-recorded interview to the conference, said the "erroneous" 1973 Supreme Court decision in Roe v. Wade that legalized abortion must be overturned. "Until that decision is reversed there will be abortion in America," he said.

"What those videos revealed more than anything else is that abortion in America has become a money-making industry," Rubio said.

Fox News’ Nicholas Kalman and The Associated Press contributed to this report.