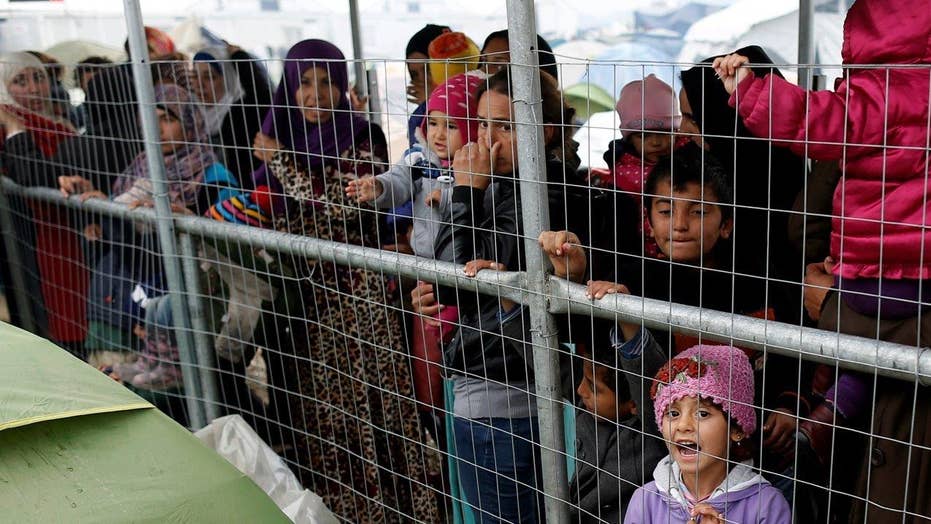 Should nations stop taking in refugees from Syria, Iraq?

Former U.S. ambassador to Belgium on the latest details about the bombers

The Brussels terror attacks that killed at least 31 people Tuesday have reignited the debate on Capitol Hill over the Obama administration’s plans to let in thousands more Syrian refugees, amid fears the Islamic State could use the opening to enter and threaten the homeland.

Though none of those involved in the attacks are believed to be refugees from Syria, ISIS took responsibility -- and GOP lawmakers say ISIS aims to exploit the crisis to send jihadists into Europe and the U.S. In Washington, those same critics immediately renewed calls to limit the U.S. refugee program after bombs ripped through the Brussels airport and subway.

“We need to immediately halt the president’s ill-advised plan to bring in tens of thousands of Syrian Muslim refugees,” presidential candidate and Sen. Ted Cruz, R-Texas, said in a press conference Tuesday. “Our vetting programs are woefully insufficient, and this administration has no means of preventing those refugees from being ISIS terrorists.”

The calls extended well beyond the campaign trail.

Sen. David Vitter, R-La., said in a statement: “We must not ignore shortfalls in our refugee process that provide opportunity for terrorist organizations, and these senseless terror attacks only reaffirm the urgent need to reverse our country’s lax policies so that we prevent dangerous terrorists from stepping onto U.S. soil under the guise of seeking refuge.”

Asylum-Seekers in the United States from Syria by Month | FindTheData

The U.S. so far has admitted just over 3,000 refugees from the war-torn nation, and the Obama administration plans to admit 10,000 Syrians in the 2016 budget year -- a move long criticized by Republicans, who repeatedly have sought to restrict the program and tighten security and screening measures.

The Obama administration counters that the U.S. has much stricter vetting procedures than Europe, and that the process takes up to two years to complete.

President Obama has scolded Republicans for their stance on the issue, while urging compassion for the civilians trying to escape the war-torn region. At a naturalization ceremony in December, he said: “In the Syrian seeking refuge today, we should see the Jewish refugee of World War II.”

On Tuesday, Sen. Jim Inhofe, R-Okla, blamed Europe’s “porous borders” as one of the reasons for the growth of radical Islam within European countries, and called for the U.S. to tighten security measures and vetting procedures of migrants.

Dir. Clapper has testified ISIL is ‘taking advantage of the torrent of migrants to insert operatives," & are "skilled in phony passports."

U.S. must continue to reassess & tighten our own security measures and vetting process of individuals looking to enter the country.

“Senator Inhofe has said, and continues to stand by his comments, that we need to be closely scrutinizing our process for bringing refugees into the U.S. that are coming from Syria or heavily ISIS impacted areas,” Donelle Harder, a spokeswoman for Inhofe, told FoxNews.com.

Such measures would likely face significant pushback from Democrats. Lawmakers clashed over the Syrian refugee policy in November in the wake of the Paris terror attacks, where at least one attacker was confirmed to have entered France as a refugee.

Lawmakers in the House in November overwhelmingly approved a bill boosting screening for Iraqi and Syrian refugees. The bill would require comprehensive background checks of every refugee from Iraq or Syria before they can be admitted into the United States and certification that each does not pose a threat.

The bill was slammed by many House Democrats, with Rep. Luis Gutierrez, D-Ill., calling it “despicable and cowardly.” The legislation later stalled in the Senate amid a concerted effort from Senate Democrats.

This month, the House Judiciary Committee approved the Refugee Program Integrity Restoration Act in an 18-9 vote. The bill would cap the number of refugees coming into the U.S. and give states the right to decide whether they wish to resettle refugees.

The Obama administration wrote to states in November, telling local resettlement officials that they do not have legal authority to refuse the refugees, and states that do not comply may be penalized.