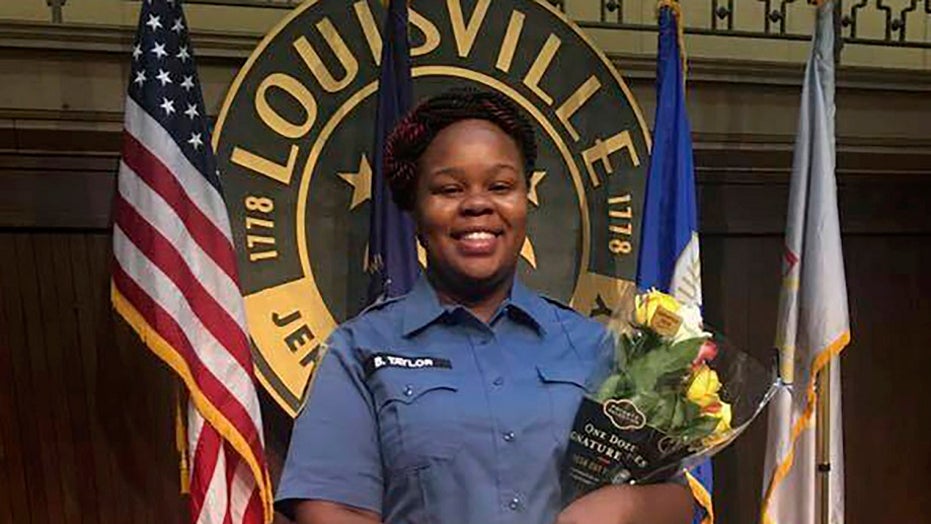 Democrats are denouncing the charges levied in the case of Breonna Taylor’s death as an “injustice,” after one of the three officers involved was charged with wanton endangerment.

Officer Brett Hankison, whom the department fired in June, was indicted on three counts of wanton endangerment in the first degree, a Jefferson County grand jury decided Wednesday. Neither the grand jury nor the presiding judge elaborated on the charges.

A warrant has been issued for Hankison's arrest and a bond is set at $15,000 cash.

No charges were announced against the two other officers involved in the raid – Myles Cosgrove and Sgt. Jonathan Mattingly, who was shot in the leg and underwent surgery after the police operation that resulted in Taylor's death. They were put on administrative leave after the shooting.

In announcing the charge, Kentucky Attorney General Daniel Cameron urged residents not to let outsiders influence their opinion on the charges. "There will be celebrities and influencers who, having never lived in Kentucky, will try to tell us how to feel… let's not give in to their attempts to influence our thinking."

A number of Democratic lawmakers lashed out at the court's ruling.

“Police murdered Breonna Taylor while she was asleep in her own home. Today, our justice system decided that these officers will not be held accountable. This is a grave and shameful injustice,” Sen. Ed Markey, D-Mass, wrote on Twitter. “Black lives will not matter until we hold police accountable for Black deaths, invest more in our communities than in criminalization, and dismantle the structures of racial oppression in our country and ensure all people are truly equal in the eyes of the law.”

An investigation found that the bullets fired by Hankison traveled into the neighboring apartment while three residents were home – a male, a pregnant female and a child, Cameron said at a press conference after the grand jury's announcement. Hankinson was not charged in Taylor's death, but rather for endangering her neighbors' lives.

“We cannot let up in our fight for justice for Breonna Taylor and every Black and brown person murdered at the hands of police. We will fight to end qualified immunity.”

“Officers murdered Breonna Taylor. This decision isn't justice, it's injustice. We must keep standing up and speaking out. We must keep organizing. We must keep the pressure on until there is full accountability, a reimagining of policing, and transformative justice—nothing less,” Rep. Pramila Jayapal, D-Wash., said.

Democratic vice-presidential nominee Kamala Harris had a more reserved take on the charges, telling reporters on Capitol Hill: “You know I haven’t read it fully yet, but there’s no question Breonna Taylor and her family deserve justice yesterday, today, and tomorrow, so I’ll review it and then I can say more.”

Democratic presidential nominee Joe Biden has not yet commented on the matter. Earlier this month he said he believes officers in the case should be charged, without elaborating. "I think we should let the judicial system work its way," he said on Sept. 3. "I do think at a minimum, they need to be charged, the officers."

Benjamin Crump, an attorney representing Taylor's family, called the charges "outrageous and offensive." He wrote on Twitter: "Jefferson County Grand Jury indicts former ofc. Brett Hankison with 3 counts of Wanton Endangerment in 1st Degree for bullets that went into other apartments but NOTHING for the murder of Breonna Taylor. This is outrageous and offensive!"

Louisville has been gripped by large-scale and sometimes violent demonstrations this summer over the death of Taylor, a 26-year-old Black woman killed during an authorized police raid executed as part of a narcotics investigation.

The city is preparing for a fresh round of unrest following the grand jury decision.

The National Guard remains at the ready Wednesday morning – vacation and time-off requests have been postponed for officers and a federal courthouse and adjacent buildings have been boarded up and will remain closed to the public this week.

The city of Louisville appeared to be on lockdown early Wednesday awaiting the announcement. At the same time, Mattingly defended his actions in an email sent to colleagues early Tuesday, arguing that he and his fellow officers “did the legal, moral and ethical thing that night."

He also blamed Fischer, Public Safety Chief Amy Hess and former Louisville Metro Police Chief Steve Conrad for failing “all of us in epic proportions for their own gain and to cover their a--es," adding that: "I’m proof they do not care about you."

Cameron, Kentucky's first Black attorney general, had repeatedly refused to give a timeline for his investigation into Taylor’s death.

Fischer, who along with the police department declared a state of emergency in Louisville Tuesday, asked people “to use caution and don’t base your own plans on the unfounded and uninformed speculation online and please don’t spread misinformation either.”