Officer Brett Hankison, who was fired in June, was indicted on three counts of wanton endangerment in the first degree, a Jefferson County grand jury decided Wednesday. Neither the grand jury nor the presiding judge elaborated on the charges.

A warrant was issued for Hankison's arrest and he was booked and released on $15,000 bail, according to local reports. 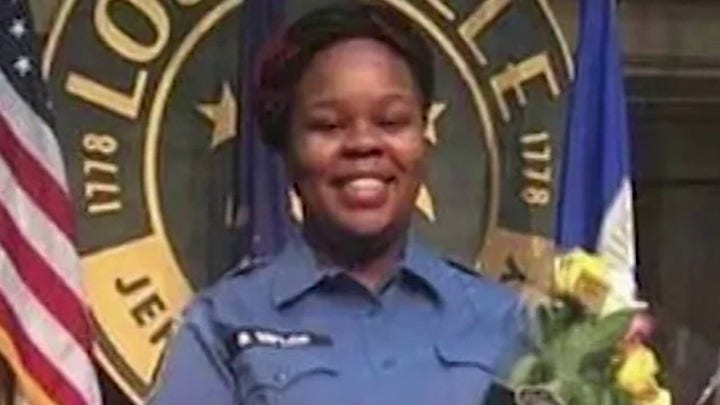 No charges were announced against the two other officers involved in the raid -- Myles Cosgrove and Sgt. Johnathan Mattingly, who was shot in the leg and underwent surgery after the police operation that resulted in Taylor's death.

The grand jury's decision prompted hundreds of protesters to turn out in Louisville, Ky., and Democratic Gov. Andy Beshear said he was authorizing the deployment of the state's National Guard in the city, albeit in a limited capacity aimed at protecting infrastructure and not facing crowds of demonstrators.

Protesters speak, Wednesday, Sept. 23, 2020, in Louisville, Ky. A grand jury has indicted one officer on criminal charges six months after Breonna Taylor was fatally shot by police in Kentucky. The jury presented its decision against fired officer Brett Hankison Wednesday to a judge in Louisville, where the shooting took place. (AP Photo/John Minchillo)

The indictment was announced 194 days after Taylor, a 26-year-old Black emergency medical worker, was shot six times by the officers who entered her home using a no-knock warrant during a narcotics investigation on March 13.

"The decision before my office as the special prosecutor, in this case, was not to decide if the loss of Ms. Taylor's life was a tragedy. The answer to that is unequivocally, 'yes,'" Cameron said. "I understand that Breonna Taylor's death is part of a national story, but the facts and evidence in this case are different than others...

Gov. Beshear began his daily news conference Wednesday by calling on Cameron to publicly release the facts and evidence that had been presented to the grand jury.

He noted that other jurisdictions had similarly released details about high-profile cases.

"Everyone can and should be informed," he said. "And those that are currently feeling frustration, feeling hurt, they deserve to know more."

A woman reacts to news in the Breonna Taylor shooting, Wednesday, Sept. 23, 2020, in Louisville, Ky. A grand jury has indicted one officer on criminal charges six months after Breonna Taylor was fatally shot by police in Kentucky. The jury presented its decision against fired officer Brett Hankison Wednesday to a judge in Louisville, where the shooting took place. (AP Photo/Darron Cummings)

The details that have been released paint a chaotic entry into Taylor's home by the officers.

Despite executing a no-knock warrant, Cameron’s office said that the officers did announce themselves before busting down the door of the apartment occupied by Taylor and her boyfriend, Kenneth Walker.

Walker, who said he believed someone was breaking in, allegedly opened fire.

He was initially accused of the attempted murder of a police officer, but local prosecutors later dropped the charge. He told police he heard knocking but didn’t know who was coming into the home and fired in self-defense.

Cameron said Mattingly and Cosgrove were justified under Kentucky law in their use of force after being fired upon by Walker and his office will not pursue criminal charges against them.

“According to Kentucky law, the use of force by Mattingly and Cosgrove was justified to protect themselves. This justification bars us from pursuing criminal charges in Miss Breonna Taylor's death," Cameron said.

But Hankison is accused of "blindly" firing his gun, without a threat within line of sight, according to a pretermination letter the police department sent to him in June.

After an initial Kentucky State Police ballistics analysis into the deadly crossfire came back inconclusive, Cameron said investigators turned to the FBI for an independent examination and review.

The FBI ballistics determined that the shot that killed Taylor came from Cosgrove’s gun.

Cameron said investigators were unable to specifically identify the source of all of the other bullets that struck Taylor. He also said he could not discuss why Taylor had been struck but Walker had not

Immediately after the announcement, people expressed frustration that the grand jury did not do more.

“Justice has NOT been served,” tweeted Linda Sarsour of Until Freedom, a group that has pushed for charges in the case. “Rise UP. All across this country. Everywhere. Rise up for #BreonnaTaylor.”

Bernice King, the daughter of the late Martin Luther King Jr., said she was “Praying for Breonna’s mother and family. Because they knew and loved her before her name became a hashtag.”

Attorney Ben Crump tweeted that the grand jury indicted Hankison with three counts of wanton endangerment in the first degree “for bullets that went into other apartments but NOTHING for the murder of Breonna Taylor. This is outrageous and offensive!”

Lonita Baker, another attorney representing Taylor’s family, reacted to the decision to bring wanton endangerment charges against Hankison, challenging that there was also enough evidence to bring perjury charges against the detective who obtained the warrant, as well as murder charges the other officers who carried out the raid.

In a joint statement Crump and his co-counsels Baker and Sam Aguilar called the lack of additional charges “indefensible” and “outrageous.”

“Her killing was criminal on so many levels: An illegal warrant obtained by perjury. Breaking into a home without announcing, despite instructions to execute a warrant that required it. More than 30 gunshots fired, many of which were aimed at Breonna while she was on the ground. Many others fired blindly into every room of her home. A documented and clear cover-up, and the death of an unarmed Black woman who posed no threat,” they alleged.

Clark Neily, the vice president for criminal justice at the libertarian Cato Institute think tank, said that the wanton endangerment charges against only one officer “will further underscore widespread perception that there is rarely any justice for victims of police misconduct.”

He also said the no-knock warrant system was “fundamentally reckless” and called for an end to the war on drugs.

Sen. Bernie Sanders, on the opposite end of the political spectrum, also used the case to call for more police accountability, an end to qualified immunity and to reform "our racist and broken criminal justice system."

Large crowds of protesters began to march outside the barricaded zone set up by police around Jefferson Square Park after the grand jury decision and blocked intersections, but there were no initial confrontations with law enforcement. A U-Haul van was seen pulling up with large shields and other supplies for demonstrators. Large placards had messages advocating to Abolish Police and Abolish U.S. Immigration and Customs Enforcement (ICE).

The warrant used to search Taylor's home was connected to a suspect who did not live there, and no drugs were found inside. The use of no-knock warrants has since been banned by Louisville’s Metro Council.

Brett Hankison, who was fired from Louisville Metro Police in June, was indicted on three counts of wanton endangerment in the first degree.

Hankison was fired from the Louisville Metro Police Department on June 23. A termination letter sent to him by interim Louisville Police Chief Robert Schroeder said the White officer had violated procedures by showing “extreme indifference to the value of human life” when he “wantonly and blindly” shot 10 rounds of gunfire into Taylor’s apartment in March.

Hankison, Mattingly, Cosgrove, and the detective who sought the warrant, Joshua Jaynes, were placed on administrative reassignment after the shooting. On Sept. 15, the city of Louisville settled a lawsuit against the three officers brought by Taylor’s mother, Tamika Palmer, agreeing to pay her $12 million and enact police reforms.

Protesters in Louisville and across the country have demanded justice for Taylor and other Black people killed by police. The release in late May of a 911 call by Taylor’s boyfriend marked the beginning of days of protests in Louisville, fueled by her shooting and the violent death of George Floyd while in police custody in Minneapolis on May 25.

Several prominent African American celebrities including Oprah and Beyoncé have joined those urging that the officers be charged.