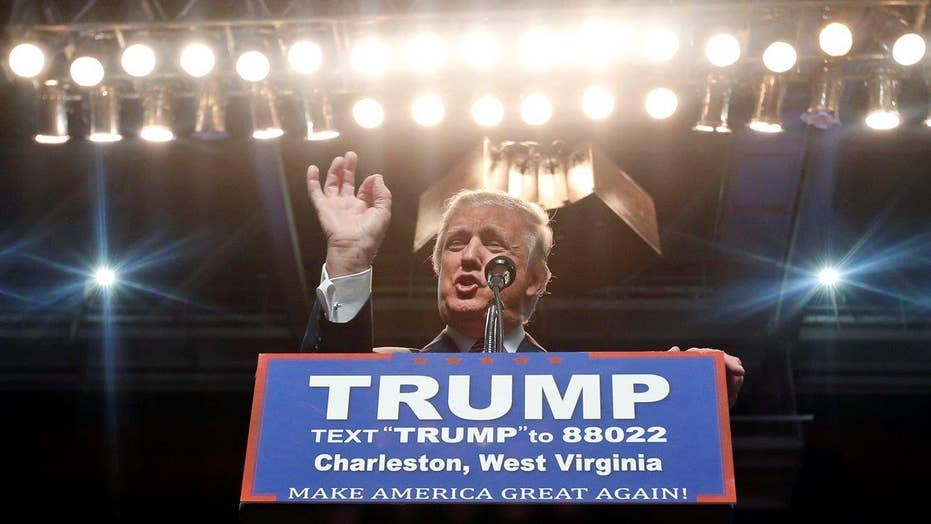 Will Trump glam up GOP convention?

The man who hosted the Miss USA beauty pageants, who starred in two hit reality shows – and who once clotheslined WWE’s Vince McMahon and then shaved his head on WrestleMania – is now in charge of a national political convention.

This oughta’ be interesting.

“I think it will be a spectacular convention,” Donald Trump predicted on Fox News.

Just what the billionaire businessman and former reality show star has in mind is the big question. But the fact that the Republican Party’s presumptive standard-bearer made his name not only in real estate but in show business portends a convention that probably will be like no other.

In the interview Wednesday with Fox News’ Greta Van Susteren, Trump made clear he’s already thinking about the entertainment. Sure, Mitt Romney had Clint Eastwood talking to a chair – but Trump, who has openly panned the 2012 convention, is thinking bigger.

"I mean you hear a lot of speeches and people end up falling asleep after the 19thspeech. We have some great country and western people who want to come in and some entertainers that want to come in – I have to keep this as a surprise,” he told Fox News.

In a sense, Trump is back to his comfort zone, and the role he played for “The Apprentice” – that of executive producer.

But as the party’s nominee, he also has to produce a party platform that Republicans can rally behind, as well as cast a vice presidential pick who might be able to tackle some of the inevitable battles with Congress should Trump win.

And he’ll need to keep the delegates and the public interested along the way.

So the task will fall on Trump to tap into what sets him apart from virtually every modern presidential candidate: his showman’s flair. To bring to the convention what he’s been bringing to packed-house rallies for much of the primary season – an energy and excitement that will enthuse the base, and translate into enthusiasm through November.

In a nod to Trump’s expertise at this sort of thing, top Trump adviser Paul Manafort earlier this week described bluntly the campaign for the presidency as the “ultimate reality show.”

“He is a television star and is connected to America. … We will be talking to America not just about Donald, but the Republican Party. We will put it in ways that hopefully will be entertaining, but also informative,” Manafort said on MSNBC’s “Hardball.”

Of course, the risk for Trump and the party will be the possibility of turning the convention into a spectacle -- and not the good kind. The city of Cleveland already is bracing for protests outside the convention hall, and organizers could still be dealing with divisions inside the party come convention week. Several party figures already are vowing to steer clear of the convention, not wanting to be associated with that scene.

Trump, though, has leveled pointed criticism at the 2012 convention stagecraft, indicating he wants this one to be memorable.

“The site has been chosen and the arena is fine, but I’d want to have — you know, the last Republican convention was extraordinarily boring,” Trump told the New York Times. Trump said his team will “make it interesting and informative, but also smart and different.”

“There certainly is a train of thought that perhaps Mr. Trump speaks every night from a different city across America highlighting a different problem he intends to solve,” Bennett said on Fox News’ “America’s Newsroom.”

“We can go to the worst school in America. We can go to a closed down factory. We can tell the American people that we understand their problems, that we feel their pain and here is the solution, the conservative Republican solution. Television is a huge, huge part of the convention, but it is not the only part,” added Bennett.

While the planning for the convention began in Cleveland more than a year ago, it was on the night of the Indiana primary -- which Trump won, knocking his last rivals out of the race -- that things kicked into gear.

Republican National Convention spokesman Dave O’Neil said the Trump campaign called the night of the Indiana primary to begin talks. Senior adviser Manafort was leading a team to Cleveland this week for the first face-to-face discussions.

“There is always the common refrain that conventions are boring, but this year that really changed because of the enthusiasm on the Republican side,” he said.

But that does not mean Trump may not opt to follow the precedent set by Barack Obama in 2008 by choosing another venue for his acceptance speech.

The Obama campaign constructed a huge stage with Greek pillars in Denver’s then-Invesco Field at Mile High, which holds 76,000 compared with the convention site at the 21,000-seat Pepsi Center.

Another factor Trump will have to navigate is the divisions in the GOP, something he was trying to address Thursday in a visit to Washington for meetings with party leaders.

Iowa Rep. Steve King, who will be in Cleveland as a Ted Cruz delegate, said he will be “watching [the platform debate] ... to see if there is an effort to change the rules” or the platform. He said he's worried the Trump camp might try to “move the Republican platform to the left.”

The vice presidential announcement, though, is certain to be the big event. And that’s at least one area where Trump may be hewing to tradition. He signaled this week he’d wait until the convention to name his running mate.

David Woodard, political science professor at Clemson University, said his VP pick will be his most important message to the base for how he plans to run his campaign.

“Let’s face it, the convention will partly answer the question of what he intends to do with the old Republican Party,” he said.