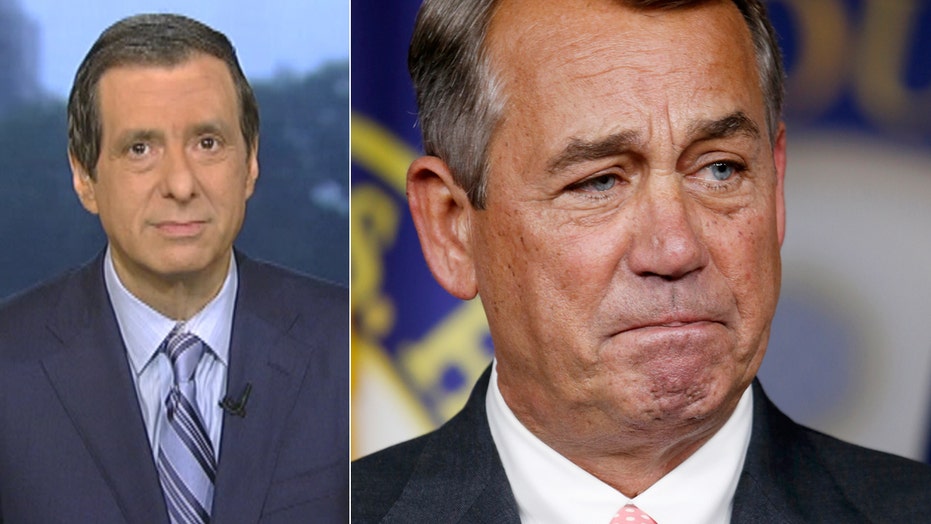 It was a split-screen moment: Word leaking to the New York Times that John Boehner would resign from Congress just as his beloved Pope was getting ready to address the United Nations.

The Beltway establishment was so shocked by the House speaker’s move that MSNBC stuck with the Boehner story for precious minutes even after Pope Francis started speaking. And it would turn out that his emotional encounter with the Pope, who asked Boehner to pray for him, convinced the lawmaker that Friday was the day to call it quits.

It’s no secret in Washington that Boehner has had a rough tenure, that he can’t control his Republican caucus, that he serves in an utterly thankless job. It is equally true that this barkeeper’s son reveres the House and that his life ambition was to win the speaker’s job.

How bad must things have been for the Ohio congressman to give up his seat? Who in the nation’s capital voluntarily relinquishes power?

The Tea Party wave that handed him the speaker’s gavel after the 2010 elections ultimately proved his undoing. Boehner has the biggest GOP majority in the chamber since 1930 and hasn’t been able to make a dent in the status quo.

Obviously Boehner was miserable and saw no chance of reconciling the warring factions that handed him one embarrassing defeat after another. Here he was, facing another government shutdown because his hardline members were refusing to compromise, in this case over Planned Parenthood funding. This faction views Boehner as insufficiently conservative, a member of the establishment, too willing to cut deals with the despised Democrats. The speaker’s view is that you can only go so far when the other party controls the White House.

Boehner’s sin, in the eyes of his detractors, is that he believes in governing, and the messy dealmaking that this requires in a two-party system. The speaker was willing to do a “grand bargain” in President Obama’s first term, raising taxes and cutting spending, but he couldn’t bring his caucus along. Again and again, he would work things out with Obama or Nancy Pelosi, only to be undercut by his own members when he couldn’t deliver the votes.

Boehner could not stop the 16-day government shutdown in 2013, fought in a futile attempt to stop ObamaCare, that badly hurt the GOP. Boehner said afterward:

“You know, they pushed us into this fight to defund Obamacare and to shut down the government. Most of you know, my members know, that wasn't exactly the strategy that I had in mind. But if you'll recall the day before the government reopened, one of the people — one of these groups stood up and said, 'Well, we never really thought it would work’ Are you kidding me?”

He could not get an immigration compromise through. He needed mostly Democratic votes to pass the Pacific trade bill. He could not accomplish much of anything.

I took a little heat online for saying on “Media Buzz” that I’m in favor of a functioning government. Is that now a controversial statement? Conservative Republicans should by all means fight the White House on ObamaCare, immigration, Planned Parenthood and other causes that ignite their passion. But if they shut down the government and don’t gain an inch on their issues, how is that progress?

Boehner told reporters he had planned to step down at the end of 2014, but changed his mind when Eric Cantor was upset in his Virginia primary.

But his explanation about avoiding a messy leadership fight didn’t quite wash, since Boehner’s departure will trigger the inevitable battle between his anointed successor, Kevin McCarthy, and other challengers. The fact is, he was done. He wanted out. He had reached the limit of his endurance in a job where not enough of his troops would back him up.

It’s amazing in this leaky city that Boehner’s plans didn’t leak earlier. The expectation had been that he would hobble to the end of his term and probably not run for reelection. To take the dramatic step of leaving Congress underscores how untenable his position had become and how frustratingly difficult it is to run the House in an anti-government era.