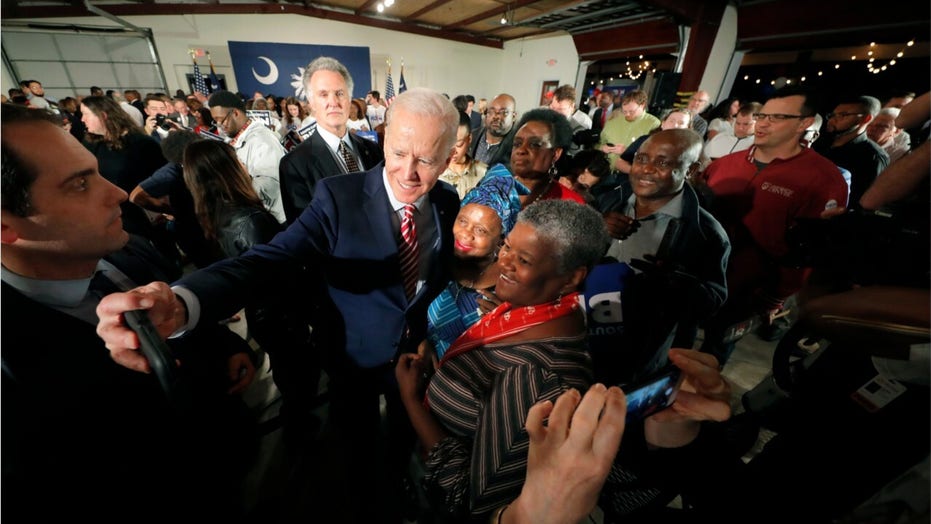 Joe Biden’s key to having any shot at the Democratic presidential nomination remains strong support from African-American voters.

But that backing is crumbling, according to the latest national polls.

The former vice president has long touted his support among black voters. Earlier this month, the one-time unrivaled front-runner told reporters that “not a single person has won [the Democratic nomination] without overwhelming support from the black community, overwhelming, overwhelming. So here’s the deal... right now I am far and ahead of everybody in the African-American community. It’s the base of the Democratic Party.”

SANDERS UP 18 POINTS OVER BIDEN IN CALIFORNIA, THE BIGGEST OF THE SUPER TUESDAY STATES

And after two lackluster fourth- and fifth-place finishes in Iowa and New Hampshire, respectively -- the two overwhelmingly white states that hold the first contests in the presidential nominating calendar -- senior campaign adviser Symone Sanders stressed that “it would be a mistake for anyone to write Biden and our campaign off before people of color have had their say in this election. You know people of color -- black folks, Latino voters -- are the base of this party.”

But according to an ABC News/Washington Post national poll released Wednesday morning, Biden’s support among black voters plummeted from 51 percent in January to 32 percent this month.

At the same time, 2020 rival Sen. Bernie Sanders of Vermont has seen his backing from black voters nationwide jump from 15 percent in January to 27 percent now. That’s helped the populist senator zoom to a double-digit lead in the overall horse race over Biden and the rest of the field in the ABC/Washington Post poll, as well as in new NBC News/Wall Street Journal and Marist/NPR/PBS surveys.

Former New York City mayor and multi-billionaire business and media mogul Mike Bloomberg is also surging in the national polls. Feeding that jump is a rise in black support -- from 8 percent to 14 percent in the ABC News/Washington Post poll this month.

Biden’s support among African-Americans also plunged in the NBC News/Wall Street Journal survey -- from 52 percent in January to 38 percent now. Sanders’ backing among black voters remained steady in the 20s, while Bloomberg saw his support double to 18 percent.

"Biden's support with African-Americans is under assault," said Bill McInturff, the GOP pollster for the NBC News/Wall Street Journal survey.

Biden’s lead among black voters has also narrowed in the Marist/NPR/PBS survey, with the former vice president at 31 percent, Sanders at 28 percent and Bloomberg at 16 percent.

A senior Biden campaign aide told reporters on Wednesday that “we’re working on driving turnout among African American and union households” ahead of Saturday’s caucuses. And the former vice president had breakfast with black pastors and other church leaders.

African-Americans make up a majority of the Democratic presidential primary electorate in South Carolina, which votes a week after Nevada. Biden's campaign has long considered the Palmetto State as their firewall.

Black voters are also a major factor, as well, in many of the 14 Super Tuesday states that hold contests on March 3.

“I note that Bloomberg is picking up African-American support of his candidacy and I don’t deny those facts but the reality is that Bloomberg’s not [on] the ballot in South Carolina,” he said.

And Kimpson stressed that a vote for any candidate other than Biden "is a vote for Bernie Sanders."