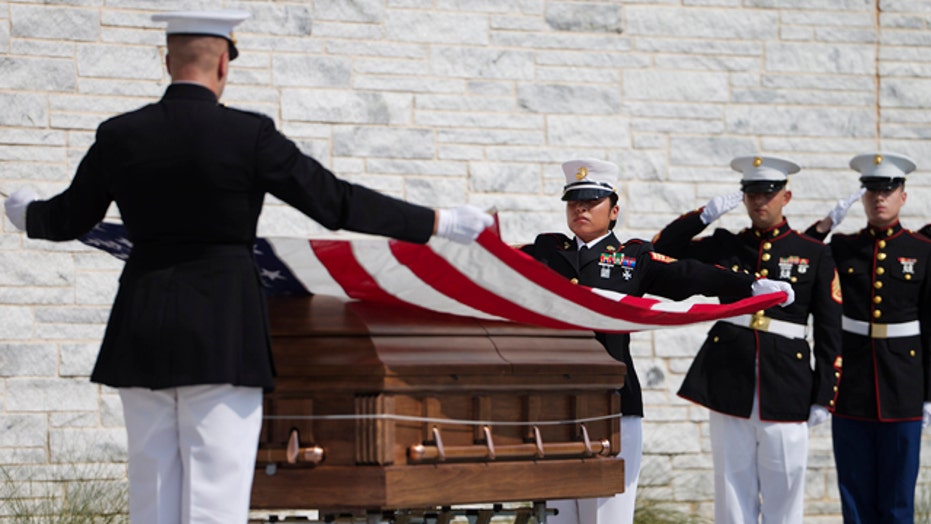 Medals depend on FBI findings

WASHINGTON — In an effort to expedite the awarding of purple hearts to the four Marines and Navy sailor killed in Chattanooga last week, Tennessee Rep. Chuck Fleischmann proposed a bipartisan House resolution to award the decoration to the military personnel.

“It’s a resolution really calling for a sense of Congress to encourage all of the parties, who have say in the process, to award our five fallen heroes in uniform who have died purple hearts,” Fleischmann told The Daily Caller Monday. “We don’t want a situation similar to what happened with the heroes who got killed at Fort Hood and they had to wait a very long time to get a purple heart.”

Nidal Malik Hasan fatally shot and killed 13 service members and injured 30 others in 2009 at the Fort Hood Army Base in Texas. The Obama administration refused to call the incident an act of terrorism and therefore denying those killed and wounded Purple Hearts for six years after the tragic events.

Despite the FBI currently calling the gunman, Mohammed Abdulazeez, who killed all five men in Chattanooga a “homegrown violent extremist” as opposed to a terrorist, the resolution will state that Abdulazeez’s actions constituted a terrorist act.

“We are affirmatively stating in there that this was a terrorist act. And it’s my hope that the FBI classifies it as such. I classify it as such. When someone does what this shooter did at two locations to cause such horrific terror and carnage, to me that’s an act of terrorism and I think it must be deemed so.

However, ultimately, Congress is not the final arbiter of what is considered to be a terrorist act; the Executive branch makes that final call a Congressional aide noted. The National Defense Authorization Act for Fiscal Year 2015 allows the Purple Heart to be awarded “to a member of the Armed Forces killed or wounded in an attack inspired or motivated by a foreign terrorist organization.”

The Daily Caller placed an inquiry to The White House and did not receive a response as to whether the president will allow the five members of the military killed in Chattanooga to be awarded the Purple Heart.

“I think right now the FBI is trying to get further Proof as to whether it was a — they opened it as a terrorism case. My argument would be if it is an act of terrorism on American soil, they deserve the Purple Heart. Major Hassan admitted he was a terrorist. And it was a terrorist act,” Chairman of the Homeland Security Committee Mike McCaul told TheDC.

“I think in this case so far we have seen his online radicalization with Anwar Alaki and other militant sites. I think for Purple Heart purposes, it would probably be good to see the investigation play out. But in my judgment this guy is a terrorist. He was ISIS-inspired,” McCaul added.

The Purple Heart also includes medical benefits to wounded military as well as surviving family members of killed in action military members. Fleischman’s resolution would ensure that the benefits would also be included along with Purple Heart honors.

“I actually spoke to the Department of Defense to day and told them we were going to be doing a resolution and, obviously, they’re going to review that, but it’s my understanding that the Marines have already prepared packets,” Fleishman said. “We had four Marines and one Navy sailor killed. In addition to that, there was an additional service person wounded and this would also make him eligible.”

House Armed Services Committee member Louisiana Rep. John Fleming says that Congress will likely have to go through both the Department of Defense as well as State Department to get the ball rolling, but it will be difficult to legislate something that the president can only decide.

Fleming also wonders why it took the president five days to call for the lowering of the American flag to half mast on government buildings to honor those killed in Chattanooga.

“These men lost their lives and there was a delay of lowering the flag at half staff and it is just inexplicable. And certainly we should decorate them and acknowledge them for what they do and sacrifices they make,” Flemming said. “They were in the line of duty. They we’re doing what they do in the military by recruiting. It wasn’t as if they were in a grocery store or something. They were targeted as military members.”