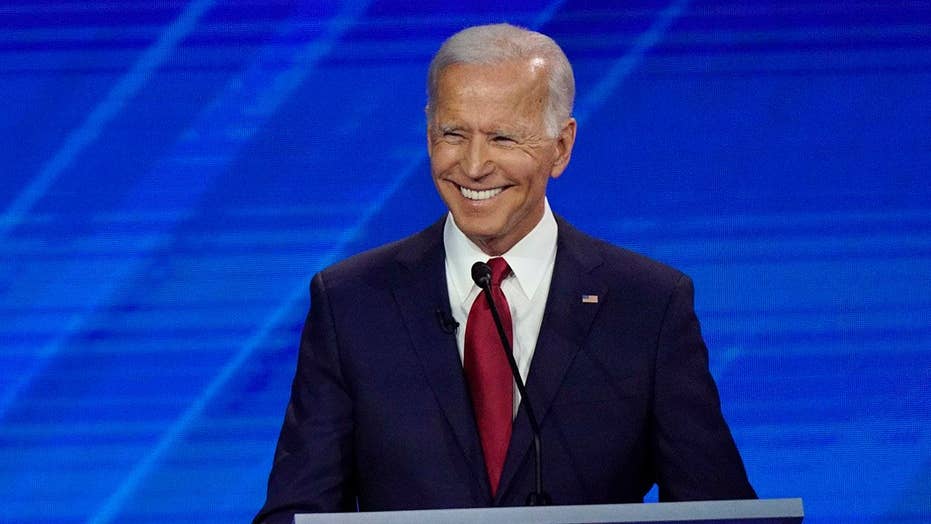 A new video from President Trump’s reelection campaign takes a big swipe at former Vice President Joe Biden's fitness for office, spotlighting clips of his recent gaffes and other verbal fumbles coupled with copious clips of pundits questioning his readiness.

The web video, tweeted Tuesday morning by campaign manager Brad Parscale and shared first with Fox News, stitches together everything from his recent debate-stage musing about "record players" to his statement that "poor kids" are just as talented as "white kids." Interspersed with the clips of the 76-year-old Biden's comments are those of pundits wondering about his stumbles, shakiness, mental and physical stamina, whether he’s “lost a step” and whether he’s “equipped for a very grueling campaign.”

The former vice president’s age and mental acuity have been questioned ever since he launched his 2020 presidential campaign in late April. Last week, the front-runner in the Democratic nomination race faced repeated attacks from rivals over his memory.

But Biden has drawn criticism for other stumbles. And another rival, Sen. Cory Booker of New Jersey, backed Castro after the debate and raised further questions about Biden’s ability to carry the banner for the Democrats into 2020.

"I think we are at a tough point right now, because there’s a lot of people concerned about Joe Biden’s ability to carry the ball all the way across the end line without fumbling," Booker told CNN in an interview. "And I think that Castro had really legitimate concerns about can he be someone in a long grueling campaign… and has every right to call out."

A clip of that Booker interview appears in the Trump campaign video.

The jabs from some of his mid- and lower-tier rivals are raising concerns that Biden – if he wins the nomination -- would be weakened for the general election showdown against Trump.

But another rival for the nomination - former Rep. Beto O'Rourke of Texas - bluntly tweeted this past weekend "who the hell cares about Joe Biden's age?"

Biden is far from the only candidate where age is an issue. The president is 72 and Sen. Bernie Sanders of Vermont – another top tier Democratic presidential candidate – is 77. Another top Democratic White House rival, Sen. Elizabeth Warren of Massachusetts, is 70. But concerns about their ages have been less of a factor.

Both Biden and Sanders have repeatedly said that age is a legitimate concern in the race for the White House.

But Biden’s been brushing off criticism that he’s too old for the Oval Office. Last Friday he told reporters he’ll prove his fitness through the grinding process that is the presidential campaign trail. And he pledged to release his medical records “when I get my next physical” before the voting begins next February in the Iowa caucuses.

This summer, the doctor who was named the White House physician to the then-vice president, said Biden was in excellent physical condition.

“He is more than capable of handling the rigors of the campaign and the office for which he is running," said Dr. Kevin O’Connor.

There is no digital ad buy associated with the latest video yet, but the Trump campaign has not ruled one out.