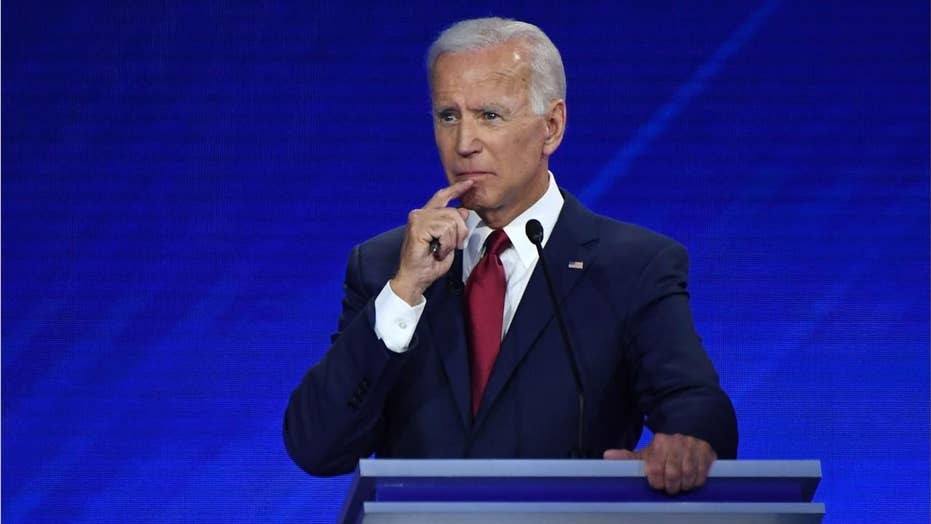 Former Vice President Joe Biden came under attack during the third Democratic debate. His age and memory came into question, New Jersey Senator and 2020 hopeful Corey Booker say people have a right to be concerned.

Former Vice President Joe Biden came under sustained and withering fire Thursday when fellow Democrats renewed their attacks on his age, memory and alleged rambling -- as his allies scolded them for the low blows and warned the approach won't pave the way to victory.

Biden, 76, fought back over the course of the three-hour debate in Houston and landed several jabs of his own on fellow Democrats battling for the nomination. But the attacks on his mental acuity, which continued after the debate ended, re-opened an issue he's tried to put to rest, signaling another nasty and personal phase in the primary race as lower-polling candidates fight to take down the front-runner.

Biden adviser Anita Dunn checked Castro later in the spin room, saying that his “cheap shot” was “based on a lie.”

“I think Castro, who likes to talk about learning from history, clearly didn’t learn from the first two debates that taking personal cheap shots at Vice President Biden actually doesn’t work out that well for the candidate who throws the shot,” Dunn told reporters. “It’s unfortunate that Castro decided to go the route he did.”

On ABC News, former Obama chief of staff Rahm Emanuel said that the way Castro handled the moment was a “disqualifier.” 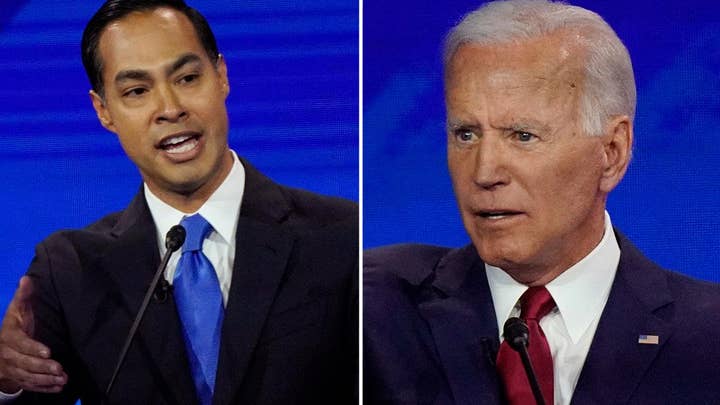 “It will come across as mean and vindictive. That’s not who he is.”

Biden’s team defended him in the post-debate spin-room, with deputy campaign manager Kate Bedingfield saying that candidates “have seen, not just in the debates, but over the course of this campaign, that attacking Joe Biden is not the way to advance yourself in the polls.”

The sustained attacks, though, raise concerns that barbs from longshot candidates such as Castro (who is polling in low single digits) could kneecap Biden as front-runner and leave him weakened for the general election race should he emerge the nominee.

Still, Sen. Cory Booker, D-N.J., publicly backed Castro after the debate and raised further questions about Biden’s ability to carry the banner for the Democrats into 2020.

"I think we are at a tough point right now, because there’s a lot of people concerned about Joe Biden’s ability to carry the ball all the way across the end line without fumbling," Booker told CNN in an interview. "And I think that Castro had really legitimate concerns about can he be someone in a long grueling campaign… and has every right to call out.”

Biden did fumble on a number of occasions during the debate, supplying more political ammo to his rivals.

At one point he said that “nobody should be in jail for a non-violent crime,” which would come as great news to people like former Trump associates Michael Cohen and Paul Manafort, who are both serving prison time for non-violent offenses. His campaign later clarified he was talking about non-violent drug offenses. He also falsely claimed the Obama administration "didn't lock people up in cages."

Further, he was mocked online when he urged people to spend evenings watching television and to “make sure you have the record player on at night.” The reference to record players, despite having a certain hipster cachet, drew Twitter teasing while others drew attention to the lengthy, rambling answer to what was a question on racism.

Booker made reference to this too in his post-debate blasting of Biden.

"At one point, he was talking about communities like mine listening to record players," he said. "I don't remember the last time I saw a record player... But there are definitely moments where you listen to Joe Biden and you just wonder.”

When asked if he was saying Biden is too old to be president, Booker said he was “definitely not saying that” but that the veteran politician has a habit of “meandering” in his speeches.

"I want someone that can excite and energize and call us to a campaign like we saw back in '08, in '12 where we saw record turnouts and somebody that can speak to the fullness of the Democratic Party," he said. "If I believed Joe Biden was that person, I wouldn't be sitting here."

Biden, as the presumptive front-runner, has faced sustained attacks before. While he has been leading the polls since his entrance in the race, his lead has tightened amid questions over his decades-long record in the Senate and his defense of working with segregationists during the 1970s.

Questions about his mental fitness have also surfaced repeatedly and provided fodder for his opponents. President Trump has nicknamed him “Sleepy Joe.” Biden was dinged by The Washington Post last month when it reported that a moving military story he frequently retold had never happened and that "almost every detail in the story appears to be incorrect."

Opponents also seized on a statement he made in August when he asked “What’s not to like about Vermont?”

He was in New Hampshire.