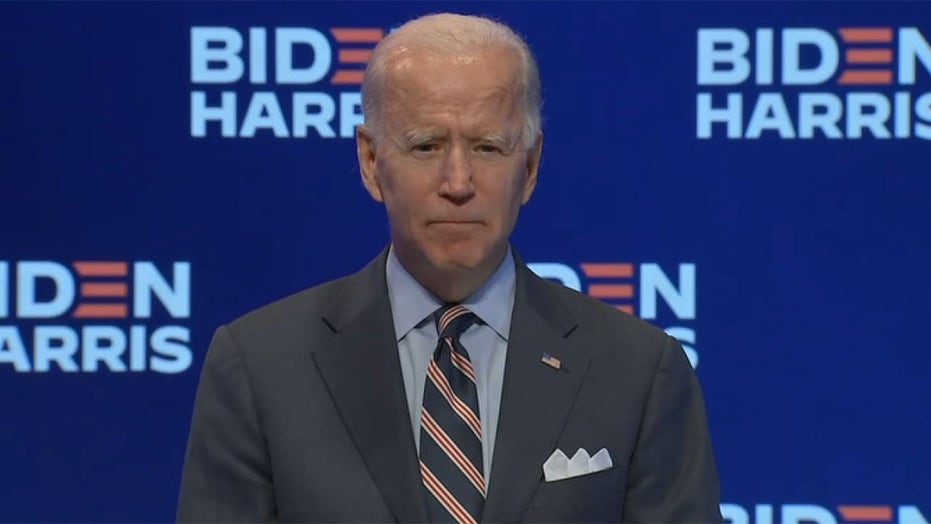 Biden: 'I trust vaccines, I trust the scientists but I don't trust Donald Trump'

Democratic presidential nominee Joe Biden says he trusts the scientists -- not President Trump -- when it comes to producing a safe and effective coronavirus vaccine.

The former vice president, speaking and taking questions from reporters in Delaware on Wednesday after sitting down for a coronavirus pandemic briefing with his team of health experts, also stressed that the efforts to produce and distribute a vaccine for COVID-19 should not be “distorted by political considerations.”

Biden accused Trump of “feckless inaction” in combating the outbreak and charged that the president had undercut the use of masks, which he called “the easiest, most effective means we have of reducing the spread of this disease.”

The former vice president spoke hours after the Trump administration announced plans for the eventual rollout of a coronavirus vaccine for all Americans. Biden stressed that “scientific breakthroughs don’t care about calendars any more than the virus does. They certainly don’t adhere to election cycles. And their timing, their approval and their distribution should never ever be distorted by political considerations. It should be determined by science and safety alone.”

Democratic presidential nominee Joe Biden takes questions from reporters in Wilmington, Delaware, after sitting down for a coronanvirus pandemic briefing with his team of health experts, on Sept. 16, 2020.

The president has repeatedly hinted the past two months that a vaccine could become available by the end of the year, possibly before Election Day on November 3, despite his own top health experts being much less optimistic.

Asked in early August if a vaccine could be available by Election Day, Trump said “I’m optimistic that it will be around that date.” Asked if having a vaccine by the November election would help his chances of winning another four-year term in the White House, the president answered that “it wouldn’t hurt. It wouldn’t hurt. But I’m doing it not for the election. I’m doing it fast because I want to save a lot of lives.”

And during a Labor Day news conference, the president said “we’re going to have a vaccine very soon, maybe even before a very special date. You know what date I’m talking about.”

Alluding to those comments, Biden stressed that “we can’t allow politics to interfere with the vaccine in any way. And he stated that “I trust vaccines. I trust scientists. But I don’t trust Donald Trump. And at this moment, the American people can’t, either.”

Soon after Biden spoke, the president told reporters on Wednesday that "we're on track to deliver and distribute the vaccine in a very, very safe and effective manner. We think we can start sometime in October." 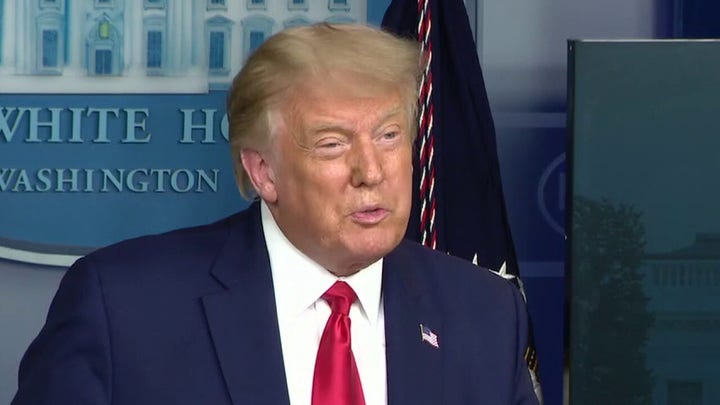 The president directly contradicted a much longer timeline for a vaccine offered earlier in the day by Centers for Disease Control and Prevention (CDC) director Dr. Robert Redfield, who was testifying on Capitol Hill.

Biden quickly took to Twitter to back up his earlier criticism of Trump, spotlighting "when I said I trust vaccines, and I trust the scientists, but I don't trust Donald Trump — this is what I meant."

GOP RIPS DEM CANDIDATES FOR SUGGESTING THEY MAY NOT TAKE VACCINE

According to a Fox News national poll conducted earlier this month, 54% of voters said they plan to get a coronavirus vaccine shot when it becomes available, but more than third of those questioned said they would not.

And nearly two-thirds of Americans questioned in a recent Kaiser Family Foundation (KFF) national poll said they worry that the political pressure from the Trump administration will lead the Food and Drug Administration to rush to approve a coronavirus vaccine without making sure that it is safe and effective.

“Public skepticism about the FDA and the process of approving a vaccine is eroding public confidence even before a vaccine gets to the starting gate,” KFF President and CEO Drew Altman said.

“What criteria will be used to ensure that a vaccine meets the scientific standard of safety and effectiveness? If the administration greenlights a vaccine, who will validate that the decision was driven by science rather than politics? And how can we be sure that the distribution of the vaccine will take place safely, cost free, and without a hint of favoritism?"

Asked by reporters if his skepticism of the president could prevent people from trusting the science behind the vaccine, Biden said “no - because they know he (Trump) doesn’t have any respect for scientists…Trust the scientists. It’s one thing for Trump to say the vaccine is safe. OK. Then give it to the board of scientists. Have total transparency.”

Biden stressed that if the scientists say a vaccine is safe, he’d “absolutely” take it. “If those three questions I laid out can be answered, yes. Absolutely.”

And he vowed, “I’m elected president, I’ll begin by implementing an effective distribution plan from the minute I take office.”

The former vice president -- speaking as the national death toll from the coronavirus was nearly 200,000 people -- pointed to projections by health experts that cases and deaths from COVID-19 will spike in November. He warned that “by the first of the year, 215,000 will be dead. Additional. That’s more than have already died. We need leadership right now to prevent that from happening.”

And spotlighting the president’s comments Tuesday night during a town hall on ABC News, Biden charged that all the president offered “was the same weak and feckless inaction, the same lies and empty promises that we’ve seen from the very beginning. He still won’t accept any responsibility. He still won’t offer a plan.”

During Tuesday night’s town hall,  the president was asked by a voter why he doesn’t more aggressively promote the use of masks to reduce the spread of the disease.

Trump responded that “there are people that don’t think masks are good.” The president also argued that waiters and waitresses – as a group – are opposed to the wearing of masks.

But the president was undercut on Wednesday by the CDC's Redfield.

“We have clear scientific evidence they (masks) work, and they are our best defense,” Redfield declared while testifying on Capitol Hill “I might even go so far as to say that this face mask is more guaranteed to protect me against COVID than when I take a COVID vaccine.”

Biden, pointing to Redfield’s comments, stressed that “the president’s first responsibility is to protect the American people and he won’t. It’s utterly disqualifying.”

The former vice president also highlighted Trump’s comments from the previous night criticizing him for not following through on a pledge he made last month to institute a national mask mandate to prevent the spread of the virus.

But he said if elected, “I would call all the governors to the White House” to make the case on implementing mask mandates and added that, at a minimum, “I wouldn’t walk around saying masks don’t matter.”