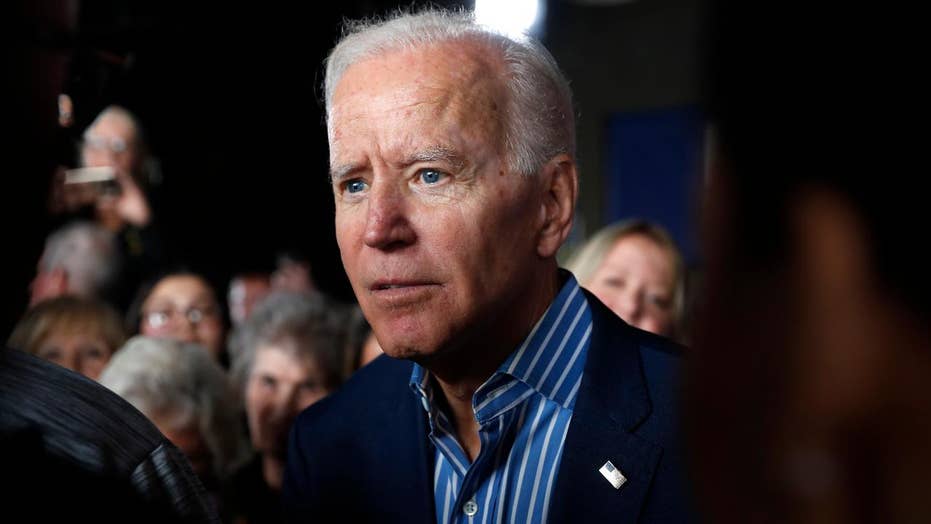 Joe Biden campaigns in Iowa amid rise in polls

Former Vice President Joe Biden joined a Democratic chorus calling for the resignation of Attorney General William Barr, despite the fact he once referred to him as “a heck of an honorable guy."

Biden’s call for the attorney general’s head came after multiple 2020 Democratic candidates came out urging Barr to resign in the wake of revelations that Mueller told Barr that his summary of the report “did not fully capture the context, nature, and substance” of the Russia investigation report.

“I think he’s lost the confidence of the American people. I think he should,” Biden, the leading 2020 candidate, told a reporter in Iowa after being asked whether Barr should resign from the post.

“I think he’s lost the confidence of the American people. I think he should.”

AS BIDEN DOWNPLAYS CHINA THREAT, ROMNEY HAS A NEW WARNING

But Biden’s call for resignation may prove to be awkward as he previously lauded Barr during the confirmation hearing back in 1991, when he presided over the Senate Judiciary Committee that went on to unanimously confirm him as the attorney general of the Bush administration.

“It's a presumptuous thing for me to say but I personally like you, I think you're a heck of an honorable guy, I think you're person when I can work with and you've demonstrated that,” Biden said.

“When I say can work with I don't mean you do it our way I mean you when you sit down and negotiate you genuinely negotiate.”

Democrats say the resignation is warranted because Barr allegedly suppressed the Mueller report, and that he cleared President Trump of obstruction of justice charges without looking into the Mueller report’s underlying evidence, a practice Barr says is typical within the Department of Justice.

“AG Barr is a disgrace, and his alarming efforts to suppress the Mueller report show that he's not a credible head of federal law enforcement,” Elizabeth Warren tweeted. “He should resign -- and based on the actual facts in the Mueller report, Congress should begin impeachment proceedings against the President.”

Sen. Kamala Harris, meanwhile, criticized Barr after he told her during the testimony that he didn’t look into the underlying evidence before deciding not to charge the president.

“He made a decision and didn't review the evidence," Harris told reporters after the hearing, according to Politico. “No prosecutor worth her salt would make a decision about whether the president of the United States was involved in an obstruction of justice without reviewing the evidence.”

She later tweeted: “What I just saw from the Attorney General is unacceptable. Barr must resign now.”

Sens. Cory Booker and Kirsten Gillibrand also jumped to demand Barr’s resignation, with Gillibrand saying “We can't trust him to tell the truth, and these embarrassing displays of propaganda have to stop.”