Foreign policy experts and those close to President-elect Joe Biden believe he will move the U.S. closer to the 2015 nuclear deal with Iran, but that it will be no easy task.

The Biden team tells Fox News that Biden’s stance on Iran is “spelled out” in a recent op-ed where he said as president he would rejoin the agreement if Iran returns to strict compliance with the nuclear deal.

“First, I will make an unshakable commitment to prevent Iran from acquiring nuclear weapons,” Biden said. “Second, I will offer Tehran a credible path back to diplomacy.”

However, Biden plans to push back against Iran’s “destabilizing activities, which threaten our friends and partners in the region,” and goes on to say that if Iran chooses confrontation he is prepared to defend U.S. interests and troops.

“With the world back at America’s side, a Biden administration will make it a priority to set Iran policy right,” the president-elect said.

Kevin Walling, a Democratic strategist with close ties to the Biden team, said “there is no question the president-elect will move us back toward diplomatic solutions around the world.”

Many of the same architects who constructed the Iran nuclear deal five years ago have been advising Biden throughout the campaign, especially former Secretary of State John Kerry, according to Walling.

The Iran nuclear deal, formally known as the Joint Comprehensive Plan of Action (JCPOA), was negotiated by the U.S. and other world powers to stop Iran from developing a nuclear bomb. But, in 2018 President Trump terminated the United States' participation in the deal, saying it failed to protect America’s national security. 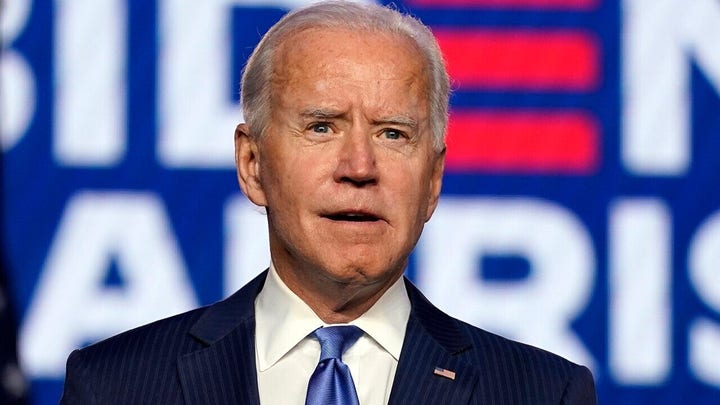 Last week Iran’s enriched uranium stockpile reportedly reached 12 times what was permitted under the 2015 nuclear deal, which Biden noted in his op-ed leaves Iran “closer to a nuclear bomb today than it was when Donald Trump took office.”

Foreign policy experts said it seems clear that Biden will move the U.S. closer to the nuclear deal, but will face challenges in doing so.

Rebecca Heinrichs, Hudson Institute fellow and former military matters and foreign policy adviser to the House Armed Services Committee, said she expects Biden’s foreign policy team will be “chomping at the bit” to rejoin the JCPOA, but noted several things will make this difficult.

The first challenge, she said, is that the Trump approach has been successful, “if you define success as drying up the regime's resources to carry out its malign activities and building pressure to force Iran to make concessions.”

The second is that the Trump approach to the Middle East has created the conditions for a coalition of Arab partners to counter Iran. The normalization agreements between Israel and some Gulf countries are clear evidence of this success. Israel would rightly oppose the U.S. rejoining the 2015 deal, and if Biden “jumps right in and upsets our greatest ally in the region, the one who has the most to lose by messing things up, that would be a disaster,” according to Heinrichs.

Mark Dubowitz, CEO of the Foundation for Defense of Democracies and adviser to the Trump administration on Iran issues, said the Biden administration should negotiate a new deal that addresses flaws of the 2015 nuclear deal, rather than simply reverting back to the JCPOA.

“A simple return to the JCPOA would give Iran patient pathways to nuclear weapons, an economy increasingly immunized against U.S. ability to use peaceful economic pressure in the future, and regional dominance. Better no deal than one that allows Iran to reach this lethal end state,” Dubowitz said.

Iranian journalist and activist Masih Alinejad said Biden will try to reverse some of President Trump's signature policies on day one or within the first few days of taking office.

“Thanks to President Trump's policies, the Islamic Republic has been weakened and I'm confident that the new president will not throw away any advantages gained over the past four years.”

Alinejad said Biden’s biggest challenge in slowly returning to the nuclear deal will be balancing excessive demands from the Iranians for relief and possible compensation for the Trump sanctions, while dealing with legitimate Israeli and Saudi concerns.

International relations expert Michael Szanto said the Biden administration will have to find balance in order to return to a nuclear deal with Iran.

“Obama's Iran deal was too weak. Trump's total pullout was too quick and too extreme,” Szanto said. “Biden will have an opportunity to try to get the best of all worlds through tough negotiating. If we get unlucky, though, we may end up with the worst of all worlds: Iran with nuclear weapons, and many key allies weary to work with us.”