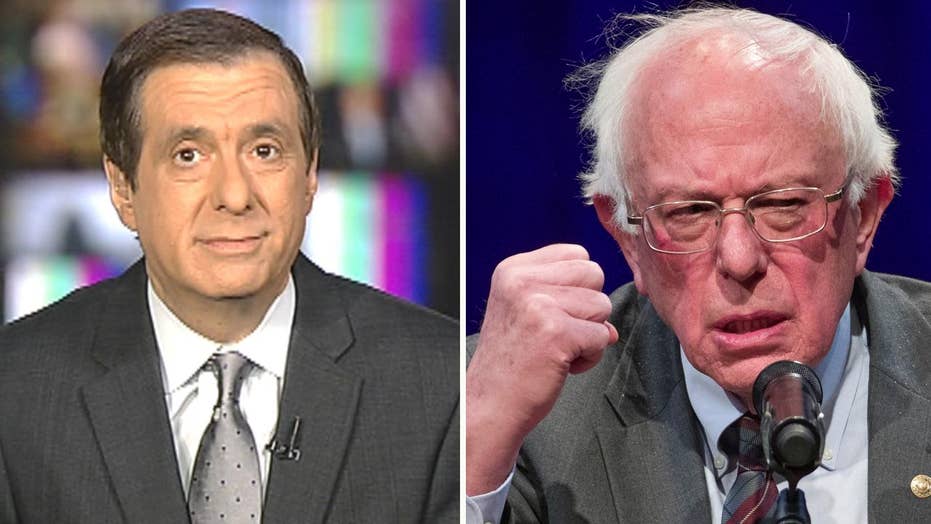 Howard Kurtz: A 77-year-old curmudgeon in a crowded liberal lane

'MediaBuzz' host Howard Kurtz weighs in on Bernie Sanders throwing his hat into the 2020 ring and whether or not he can carry that same liberal draw as he did in 2016.

But with many more choices awaiting them, the party's voters have to decide whether they want a 77-year-old curmudgeon with a socialist agenda who's not even a Democrat.

And as numerous pundits have observed, Sanders, who got trounced among black voters last time, will be running this time around against two black candidates and others with more proven appeal in that community.

In launching his campaign yesterday on radio and on "CBS This Morning," the Vermont senator obviously knows that the playing field has changed since he did far better than anyone expected against Hillary Clinton. The strength he brings from that primary run includes a killer mailing list and a proven ability to raise lots of money from small donors.

One weakness is that many Hillary supporters have never forgiven Sanders for the campaign he waged against her, and she has said he didn't do enough to rally his backers behind her in that fall.

But if you're a liberal Democrat and you kinda sorta liked Bernie last time, why wouldn't you prefer:

Kamala Harris, who just distanced herself from the Bern by saying she's not a democratic socialist;

Elizabeth Warren, known for her populist crusades against Wall Street and the banking industry;

Cory Booker, who has a more uplifting message;

Or Amy Klobuchar, who's proven she can work with Republicans?

Oddly enough, Sanders just became the only major Democratic candidate who's ... a white man. He may soon lose that status if 76-year-old Joe Biden, who keeps delaying his decision, gets in. They are nominal front-runners in the polls, mainly because of name recognition.

President Trump weighed in with a dig and a compliment, saying "personally, I think he missed his time" but adding that "I like Bernie" because they agree on a tough approach to trade.

This Washington Post report on what Sanders aides say will be his platform gives you a sense that he's all in on the left-wing thing:

Sounds like it will cost zillions of dollars, doesn't it?

The New York Times, to underscore the independent senator's difficulties with black voters, unearthed a 2016 staff memo written after he got walloped in South Carolina:

"The margin by which we lost the African-American vote has got to be — at the very least — cut in half or there simply is no path to victory." The score in that state, according to exit polls, was Hillary 86 percent, Bernie 14 percent.

Look, you have to credit Sanders with sensing much earlier than the Democratic establishment that many party voters were hungry for full-throated liberalism that broke with incremental Clintonism. And Bernie clearly connected with those (mostly white) folks.

But he also was the repository for nearly all the votes of those who didn't like Hillary for whatever reason — personality, gender, e-mails, part of a machine, etc. But now, as far as we know, she's out of the picture.

I said many times during 2016 that Sanders got one huge gift that year: the media never expected him to win the nomination (based on, well, math). The result was that he was never subjected to heavy-duty journalistic scrutiny: not on his policies and not on his record. He was essentially entertainment for political reporters who didn't want the primaries to end too soon (and who consistently underestimated his appeal).

Bernie won't have that luxury this time around. If he gets traction, the press will be all over him. And he'll have several big-league rivals — who are actually Democrats — crowding his "lane."