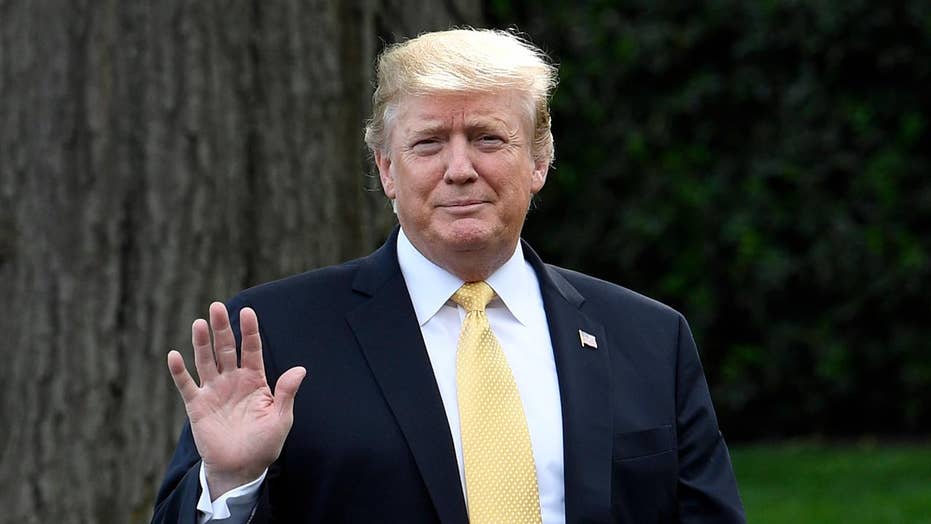 Trump: AG Barr will do what's right on campaign spying

President Trump weighs in on new Strzok-Page texts, the FISA abuse scandal, and the origins behind the Russia investigation on 'Hannity.'

Attorney General Bill Barr will be a no-show at a long-awaited hearing on Thursday before the Democrat-led House Judiciary Committee based on current negotiations over his appearance, a source on the committee told Fox News on Sunday.

The emerging spat comes after Barr has endured withering attacks from congressional Democrats, who have outright accused him of sacrificing his integrity to appease President Trump. Barr shepherded the release of Special Counsel Robert Mueller's report in recent weeks, and he has largely become a punching bag for progressives frustrated that Mueller's probe found no evidence to back up claims that the Trump team colluded with Russians.

Fox News has learned that Judiciary Committee Chairman Jerry Nadler, D-N.Y., wants to have Judiciary Committee staff -- rather than members of Congress -- question Barr on his handling of Mueller's report. But DOJ officials say members should conduct the inquiry.

“The attorney general agreed to appear before Congress; therefore Congress does the questioning," a DOJ official told Fox News.

Justice officials also told the committee that they are opposed to the panel's plan to go into a closed session if members want to discuss redacted portions of Mueller's report, a Democratic senior committee aide told The Associated Press.

Discussions about Thursday’s hearing are ongoing, and expected to resume again Monday. Barr is scheduled to testify before the Senate Judiciary Committee on Wednesday and the House panel on Thursday. The GOP-led Senate committee is expected to have normal rounds of member questioning.

"Attorney General Barr wasn’t asked to testify before the committee—he offered," a spokesperson for House Judiciary Committee Republicans told Fox News. "He provided the Mueller report voluntarily. He invited Democrat leaders to view the less redacted report in person. Yet the only thing, apparently, that will satisfy Democrats, who refuse to read the less redacted report, is to have staff pinch hit when a cabinet-level official appears before us."

The spokesperson added: "What actual precedent is there for our committee making such demands of a sitting attorney general as part of our oversight duties? The attorney general isn’t a fact witness, and this committee’s investigations—as Democrat leadership reminds us daily—don’t constitute impeachment, so Democrats have yet to prove their demands anything but abusive and illogical in light of the transparency and good faith the attorney general has shown our committee.”

It is unusual for committee counsels to question a witness. But committees can generally make their own rules, and other panels have made similar exceptions. In a confirmation hearing for Supreme Court Associate Justice Brett Kavanaugh last year, for example, Republicans on the Senate Judiciary Committee hired an outside prosecutor to question a witness who had accused Kavanaugh of sexual assault.

At a fiery House hearing earlier this month -- prior to the release of the complete Mueller report with only limited redactions -- Barr faced a grilling from Democrats, who said it was "unacceptable" that he had released a 4-page summary of Mueller's findings.

The new dispute comes as tensions have escalated sharply between House Democrats and the Trump administration over full access to Mueller's report and government witnesses who have defied congressional subpoenas to testify. Democrats have been eagerly anticipating the hearing with Barr as they try to build on Mueller's findings with their own investigations into the president.

House Democrats have subpoenaed the Justice Department for the unredacted version of the Mueller report and underlying material gathered from the investigation. In response, the Justice Department has said they will make the full report, minus grand jury material (which legally must be withheld), available to a limited group of members — an offer that Democrats have so far refused. The dispute could eventually end up in court.

Democrats have criticized Barr for drawing his own conclusion that Trump did not obstruct justice after Mueller found he couldn't exonerate the president on that point, and punted to Barr and Deputy Attorney General Rod Rosenstein. House Speaker Nancy Pelosi has said Barr is involved in a "staggering public effort" by the Trump administration to put a positive face on Mueller's findings.

Nadler has also invited Mueller to testify and subpoenaed former White House counsel Don McGahn. McGahn was a vital witness for Mueller in the report, which recounted the president's outrage over the Mueller investigation and his efforts to curtail it. The White House has asserted it will fight the McGahn subpoena.

Trump, for his part, told Fox News last week that he didn't assert executive privilege to shield any aspect of the Mueller report -- and that now, it's time to move on.

Even liberal comedian Bill Maher seemed to agree on that point, telling Democrat Rep. Adam Schiff, D-Calif., that Democrats appear to be "stalking" Trump by fixating on a discredited narrative that his campaign colluded with Russians.

Meanwhile, a former White House staffer who was at risk of being held in contempt of Congress has agreed to testify, potentially averting a separate showdown between Democrats and the White House.

The House Oversight Committee has scheduled an interview for Wednesday with Carl Kline, who worked as the White House's personnel security director.

The panel subpoenaed Kline after a former subordinate told the panel that dozens of Trump administration officials were granted security clearances despite "disqualifying issues" in their backgrounds. Kline defied a subpoena to appear, prompting Democrats to threaten contempt action against him. The White House then said Kline could appear voluntarily on May 1 to discuss "personnel security policies and practices."