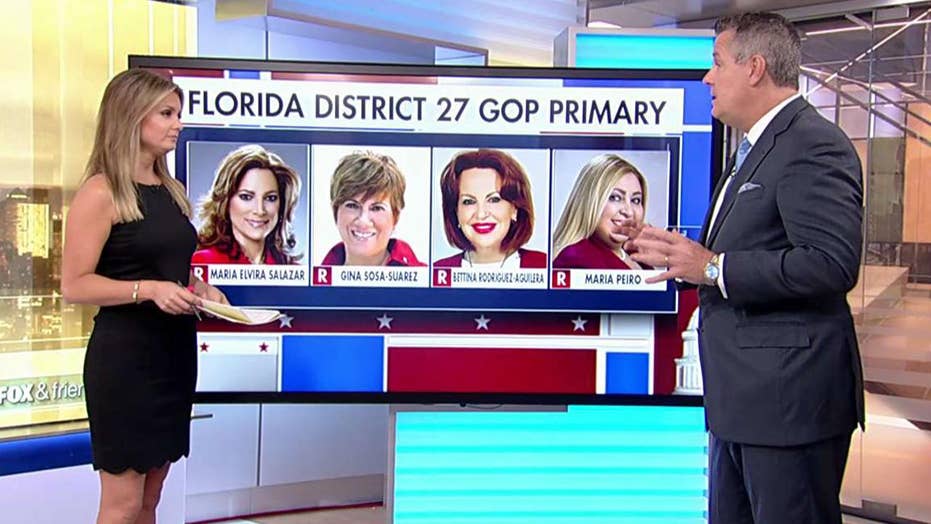 With the pivotal midterm elections just a few months away, all eyes were on the sunbelt Tuesday as voters headed to the polls in Arizona and Florida.

Both Ducey and Garcia announced they will suspend campaign gatherings later in the week to pay respects to Arizona Sen. John McCain, who died on Saturday after a yearlong battle with brain cancer.

McSally will face Democratic challenger Rep. Kyrsten Sinema to decide who will replace the seat vacated by retiring Sen. Jeff Flake, in what is expected to be a tough election for the GOP.

Gov. Ducey said he would nominate a replacement for McCain after the late Senator’s funeral on Thursday.

There are two open seats up for grabs in Arizona that Democrats are looking to win as they try to regain control of the House in November.

Republican Lea Marquez Peterson, CEO of the Tucson Hispanic Chamber of Commerce, earned her party’s nomination and will face former Rep. Ann Kirkpatrick, who beat out a handful of candidates in a competitive Democratic primary.

The two candidates are vying for a seat in Arizona’s 2nd District, which was vacated by McSally who earned a GOP bid for Senate on Tuesday.

Arizona had a handful of other Congressional races as well:

In a shocking upset, Andrew Gillum, a young black mayor of Tallahassee, defeated a crowded Democratic field to earn his party’s nomination Tuesday. Gillum, who spent the least of the major candidates and appealed to the far left of the party, received the backing of Vermont Sen. Bernie Sanders.

On the Republican side, U.S. Rep. Ron DeSantis came from behind with the help of the president’s support to beat Agriculture Commissioner Adam Putnam.

DeSantis and Gillum will square off in November to decide who will replace current Gov. Rick Scott, who has reached his term limit.

Andrew Gillum delivered a shocking upset in Florida's primary on Tuesday to earn the Democratic nomination for governor. (AP)

Scott will meet Democratic incumbent U.S. Sen. Bill Nelson in a crucial November election that could decide which party controls the Senate. Nelson was first elected to the U.S. Senate in 2000.

Florida held more than a dozen Congressional primaries on Tuesday, but Democrats are eyeing one seat in particular that they believe could flip from GOP control.

Although Ros-Lehtinen won re-election in 2016, presidential candidate Hillary Clinton had about a 20 percentage point advantage of Trump.

In the other races, no incumbents were defeated. Democratic Rep. Frederica Wilson was re-elected after winning her primary because she has no challengers in the general election.