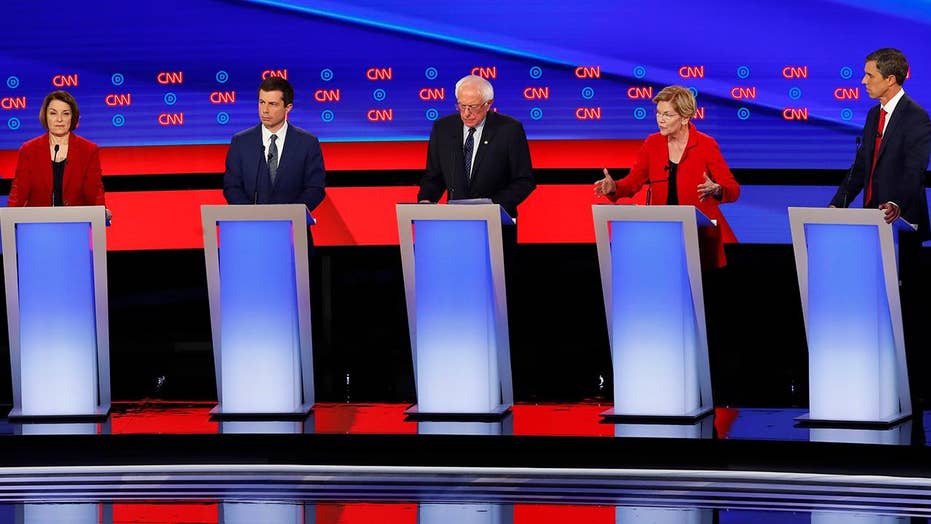 Democrats are reaching out to local AAPI advocacy groups in hopes of courting a voter base that could prove pivotal in battleground states like Nevada where the margin of error to win is razor-thin.

LAS VEGAS -- As the 2020 race ramps up, Democratic presidential hopefuls are turning their focus to a voter bloc that has in recent years felt ignored -- Asian Americans and Pacific Islanders.

“I think in 2018 the midterm really taught us something very valuable, which is that we were left behind for many cycles and that's the thing that really woke people up in 2018  -- is that yes, the API community votes are very much needed but no one ever talked to them,” said Duy Nguyen, executive director of One APIA Nevada, a nonprofit organization aimed at empowering the Asian community.

Democrats are reaching out to local AAPI advocacy groups in hopes of courting a voter base that could prove pivotal in battleground states like Nevada, where the margin of error to win is razor-thin.

“Before our community was dismissed or overlooked or often being asked for things at the very last minute. However, this particular presidential election is exciting because folks are coming to us now,” he added.

Presidential hopefuls like former Vice President Joe Biden and Montana Gov. Steve Bullock have events scheduled with the AAPI community this week and are among 10 candidates, according to the Wall Street Journal, who have already met with the Asian community in Nevada.

In the presidential race, the AAPI vote could be the boost needed to secure a victory in Sin City.

“The share of eligible voters has increased about 35 percent in just the past, you know, five to six years. We're talking about 200,000 voters in the state of Nevada, and when Hillary Clinton only won the state by 30,000 voters you can see how this particular voting bloc is of increasing importance, especially since they were voting kind of 50/50 Republican-Democrat in the past and now they're much more enthusiastic and favorable towards the Democrats,” Emily Ekins, PhD research fellow and director of polling at the Cato Institute, told Fox News. “This is a new constituency that I think Democratic candidates feel like if they can call and win this voting bloc that could help win the vote in Nevada.”

Democrats are targeting the Asian American, Pacific Islander community in the battleground state of Nevada. (One APIA Nevada)

Between 2000 and 2010, the population in Las Vegas grew by 42 percent, with the Asian American and Native Hawaiian and Pacific Islander populations growing 130 percent and 112 percent, respectively, according to 2016 data from Nielsen.

“I think there has been a concerted effort amongst some of the presidential candidates and other political candidates to engage the population. The AAPI population in Nevada is 10 percent and growing, that's a huge population,” Democratic Assemblywoman Rochelle Nguyen told Fox News. “I think we learned here in this state that it can make and break elections in 2016,” referring to Clinton’s narrow margin of victory.

“I think that political candidates that are out there are smart to reach out to these different groups that have been disenfranchised and get their voice and hear what their concerns are,” she added.

Ekins noted it has only been in recent years that the AAPI community began trending more Democratic as Republicans failed to make an effort to reach out.

GABBARD: VOTERS DESERVE TO KNOW THE TRUTH ABOUT THE 2020 CANDIDATES

“Some polls showed that Asian-American voters were three times more likely to be contacted by Democratic campaigns than they were Republican campaigns. So even though many were voting Republican, Democrats were the ones reaching out to them,” she said, adding that she’s heard from local leaders in Nevada who say the Trump campaign has yet to reach out to the AAPI community.

Republican National Committee spokesman Rick Gorka told the Wall Street Journal the Trump team and RNC worked with the AAPI community in 2016 and have held events in Nevada ahead of 2020.

As for the issues AAPI voters are concerned about, Swaiiow Yan of the Presidential Youth Initiative under U.S. Education without Borders, told Fox News “education, immigration, and economic development are very important for our future of America.”

Yan said he has not yet made a decision on who to vote for, but believes “they’re all good leaders and all have very good perspective and policies,” adding that “we have been quite silenced for a long time, we want our voice heard and for the media to have more focus and more courage for our community.”

While Democrats recognize and are capitalizing on a voter base that is growing and continues to have more influence, especially in tight elections, Ekins said it is a missed opportunity for Republicans, who if put in the time, could pull away some votes.

“By far, the largest Asian-American voting group in Nevada are Filipino Americans and polls tell us that Filipino Americans tend to vote a little bit more Republican whereas other Asian-American constituencies, like Pakistani Americans, tend to vote more Democratic,” Ekins said. “So you've got a state where many or most of the Asian-Americans were voting for Republicans just about 15 years ago and many kind of tend to be a little bit more favorable towards the Republican Party … you would expect that if Republicans actually reached out to these voters in the state of Nevada that perhaps they would find more success.”

And while Duy Nguyen believes the media is still missing the narrative, he’s happy to see it trending in a new direction.

“It's still an uphill battle," he said, "but we're glad that we're at the table to remind them that there is an emerging community of voters in Nevada.”