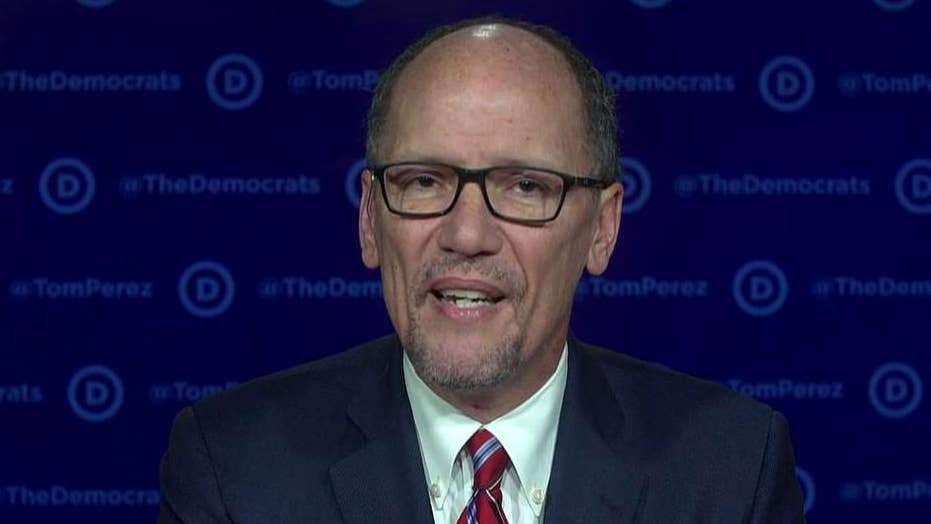 DNC Chariman Tom Perez: This is a manufactured crisis, there is no credible evidence of terrorists crossing the border

Democratic leaders are doubling down on accusations that President Trump’s description of a crisis at the U.S.-Mexico border is “manufactured,” as the president prepares to visit the front-lines on the heels of his Oval Office address to the nation.

The response to the speech underscores how increasingly polarized the debate has become and how little progress is being made toward a resolution to the standoff that triggered a partial government shutdown nearly three weeks ago.

Trump plans to meet with congressional leaders once again in the Situation Room Wednesday afternoon, ahead of his planned trip to the southern Texas border on Thursday. But past meetings have resulted in both sides digging in, with Trump insisting on nearly $6 billion for a border wall and Democrats saying they won’t entertain the discussion until Congress passes and Trump signs a package re-opening shuttered federal agencies.

Tuesday night’s primetime address saw both camps drifting even further apart, with Trump declaring a “humanitarian and security crisis" and vowing to protect America, “so help me God” – and Democratic congressional leaders saying Trump is working to “manufacture a crisis, stoke fear and divert attention from the turmoil in his administration."

“This whole border security crisis … it really, I believe, is a manufactured crisis,” he said, adding that it’s distracting from issues like health care and education.

"The fact is: the women and children at the border are not a security threat; they are a humanitarian challenge," House Speaker Nancy Pelosi said in the joint Democratic rebuttal alongside Schumer.

Trump and his allies say Democrats, many of whom supported border security measures in the past, are only bucking the calls now because of knee-jerk opposition to his administration.

But Perez maintained that Democrats believe in meaningful border security, and also believe a wall is not “smart” policy.

How the two sides will bridge this difference – and how long they will resist a compromise – remains unclear. The mounting impact of the partial shutdown, which initially was limited but will increase as more federal workers miss paychecks this cycle and services like those at national parks suffer, is likely to increase pressure on Congress and the White House to forge a deal in the coming days.

Yet Trump told congressional leaders the standoff could last months, even years, as he demands Washington take action to stem the flow of illegal immigrants, drugs and criminals crossing the border.

On Tuesday, Trump underscored cases of Americans killed allegedly by illegal immigrants, including California police Cpl. Ronil Singh, who was murdered the day after Christmas -- allegedly by an illegal immigrant suspected of driving drunk. The suspect had multiple prior arrests, and Republicans have charged that California's sanctuary laws -- which prevent local law enforcement from cooperating with federal immigration authorities -- led to Singh's murder.

"America’s heart broke the day after Christmas when a young police officer in California was savagely murdered in cold blood by an illegal alien who just came across the border," Trump said. "The life of an American hero was stolen by someone who had no right to be in our country."

He asked, “How much more American blood must be shed before Congress does its job?"

Pelosi responded: "President Trump must stop holding the American people hostage, must stop manufacturing a crisis, and must re-open the government."

Fox News’ Gregg Re and Samuel Chamberlain contributed to this report.