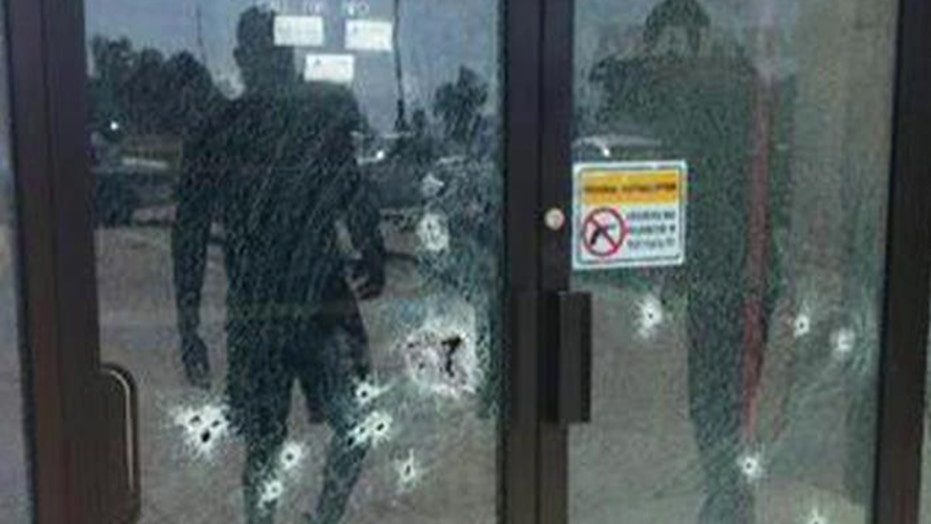 Gun-free zones: Time to arm our Armed Forces at home?

Jim Hanson of the Center for Security Policy weighs in

The Army's top officer said Friday they would review security at military recruiting and reserve centers in the aftermath of the deadly shooting in Tennessee, but urged caution amid growing calls to arm more soldiers to protect against these kinds of attacks.

Gen. Ray Odierno, chief of staff of the Army, told reporters that arming troops in those offices could cause more problems than it might solve.

"I think we have to be careful about over-arming ourselves, and I'm not talking about where you end up attacking each other," Odierno said during a morning breakfast. Instead, he said, it's more about "accidental discharges and everything else that goes along with having weapons that are loaded that causes injuries."

Outside of military operations, Defense Department policy limits the carrying of firearms to personnel engaged in law enforcement duties and "qualified personnel when there is a reasonable expectation that life or DoD assets will be jeopardized if firearms are not carried."

The Pentagon released a statement Friday saying that Secretary Carter had approved "immedate steps" to enhance force protection, and had also asked for recommendations to ensure safety at military centers by the end of next week.

A day after a gunman shot and killed four Marines and wounded three other people in Chattanooga, Odierno confirmed the recruiters were not armed.

The shooting swiftly has renewed the debate in Washington, and on the presidential campaign trail, over whether the laws and policies should be updated to reflect current threats.

Senate Armed Services Committee Chairman John McCain, R-Ariz., and his House counterpart, Rep. Mac Thornberry, R-Texas, released a joint statement Friday saying they've been working since before the shooting to "clarify a post commander's authority to allow carrying of personal firearms" and will direct the Pentagon to change policies.

"We can and must do more to protect our troops," they said.

Wisconsin Gov. Scott Walker, a 2016 GOP White House candidate, told Fox News the policies that prohibit personnel from being armed at these centers are "outdated."

"Containment was something that might have been good during the Cold War, but we're facing an enemy in radical Islamic terrorism that's willing to take the fight to us and we need to make sure that our men and women in uniform not only have the resources to protect us and keep our country safe, but they need to have the resources to keep themselves safe," he said.

But Odierno said, right now, there are no plans to change the military's firearms policy and cited "legal issues" with arming soldiers off-base, including a 19th century law limiting the ability to arm Army soldiers off-base.

"First off, we have to figure out what happened, and then we will have to decide will [arming more soldiers] make a difference," he said. But he added they would "conduct an assessment," and law enforcement would be brought in to review security at bases and recruiting stations nationwide.

"We don't want to overreact, but we have to do more quickly," he said, while acknowledging they will always be "somewhat vulnerable to a 'lone wolf' or whatever you want to call it, a surprise shooter because we are out there with the population and that is where we have to be."

Tucked in strip malls in small rural communities and in high-traffic city spots like New York's Times Square, military recruiting and reserve stations are designed to be open and welcoming to the public.

The ban on troops inside carrying weapons is largely due to legal issues, such as laws that prohibit the federal government from using the military for domestic law enforcement, so troops don't routinely carry guns when they are not in combat or on military bases.

According to authorities, Kuwait-born Muhammad Youssef Abdulazeez, 24, of Hixson, Tennessee, unleashed a barrage of fire at a recruiting center in Chattanooga, then drove several miles away to a Navy and Marine reserve center, where he shot and killed the Marines. He was shot to death by police.

In the wake of previous shootings at military facilities, the services have reviewed and strengthened security precautions at the centers. But most of those involve safety precautions and the need to be aware and watchful of surroundings.