In an exclusive interview with Fox News at the Israeli American Council (IAC) summit in Hollywood, Florida, U.S. Special Envoy to Monitor and Combat anti-Semitism Elan Carr outlined what the Trump administration is doing to curb the problem. Fox News' Talia Kaplan reports.

EXCLUSIVE — U.S. Special Envoy to Monitor and Combat Anti-Semitism Elan Carr told Fox News in an interview that the U.S. needs to fight the scourge of anti-Semitism not only inside its borders, but around the world.

Speaking last Friday at the Israeli American Council (IAC) summit in Hollywood, Fla., Carr said, “Anti-Semitism truly is history’s greatest barometer of suffering and it starts with the Jews, but it leaves a trail of human wreckage, so in fighting this fight we are really fighting for a better world for our children and grandchildren.”

The next night, standing with President Trump as he addressed 4,000 Israeli Americans at the summit, Carr added, “At the president’s direction, we are simultaneously confronting far-right ethnic supremacy, radical left Israel hatred and militant Islam.”

He said all three groups were contributing to a global rise in anti-Semitism.

TRUMP TO 4,000 ISRAELI AMERICANS IN FLORIDA: US-ISRAEL RELATIONSHIP IS 'STRONGER NOW THAN EVER BEFORE'

Carr told Fox News the Trump administration, with the help of Secretary of State Mike Pompeo, has been confronting anti-Semitism in the United States, Europe, the Middle East and beyond.

“I’m hopeful that with the leadership of President Trump and Secretary Pompeo, we’re going to see a rollback of this rise in anti-Semitism both here at home and abroad,” he told Fox News in an exclusive interview.

In an exclusive interview with Fox News at the Israeli American Council summit in Hollywood, Florida, U.S. Special Envoy to Monitor and Combat Anti-Semitism Elan Carr outlined what the Trump administration is doing to curb the problem.

When asked if he was already seeing a “rollback” with the measures the president has implemented, Carr answered, “I’m very excited by the things the president has already done and I think we’re going to see tangible effects from this, and I am very encouraged that we are on the right track.”

This past September, the United Nations released an “unprecedented” report on anti-Semitism, which pointed out that the frequency of incidents appeared to be increasing.

It also made mention of several exceptionally violent incidents that “have had an outsized impact on Jewish individuals’ sense of security in recent years.”

Specifically, the report mentioned the 2018 attack at the Tree of Life Synagogue in Pittsburgh, where a gunman opened fire and killed 11 congregants “in the deadliest attack on Jews in U.S. history.” The report noted that the gunman’s “comments during the attack and social media activity on the days preceding it revealed a belief in a host of anti-Semitic conspiracy theories rooted in a far-right, white supremacist ideology.”

Police tape is viewed around the area on October 28, 2018 outside the Tree of Life Synagogue after a shooting there left 11 people dead in the Squirrel Hill neighborhood of Pittsburgh on October 27, 2018.  (BRENDAN SMIALOWSKI/AFP/Getty Images)

It also pointed out that about six months later, "a gunman similarly motivated by white supremacist ideology killed one congregant and wounded three others at a synagogue in the Poway California community."

Responding to the U.N. report, Carr told Fox News, “It’s a model on the condition on the state of anti-Semitism in the world today, and here’s an example of the U.N., not known to be a friendly neighborhood necessarily on this issue and for Israel, and yet this was a thorough, comprehensive report. We’ve got to give credit where credit is due.”

On Saturday's summit, Trump said his administration was committed to fighting what he called a “vile poison.” He continued, “My administration is committed to aggressively challenging and confronting anti-Semitic bigotry in every resource and using every single weapon at our disposal.”

Trump also spoke about the Palestinian-led Boycott, Divestment and Sanctions (BDS) movement, which has called for a boycott of all Israeli products. 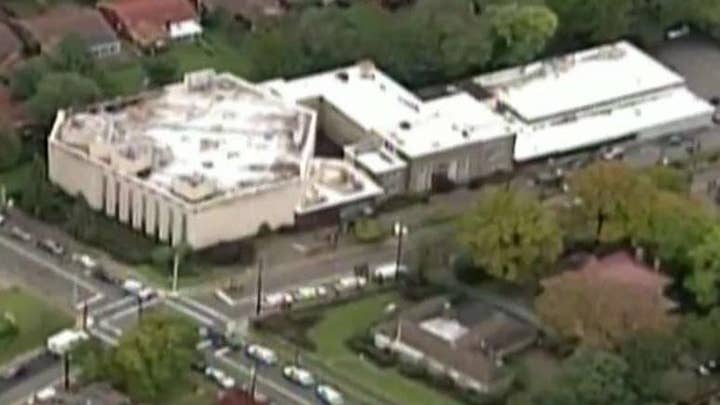 “As president I want to be very clear, my administration condemns the BDS campaign against Israel. But, sadly, BDS has made disturbing headway on American college campuses.”

Most of the college students who spoke to Fox News at the summit said they’ve experienced anti-Semitism on their campuses.

Student Micah Bresler, who is Jewish, described an incident at the University of Cincinnati, which he said took place last semester.

“There is a main street on campus that everyone walks down to get to their classroom and to the side of the street, there were multiple students on the ground laying there with other students holding up signs that were derogatory towards Jewish people and towards Israel,” Bresler told Fox News. “Walking by this with one of my friends who is in my fraternity with me, we felt very uneasy and we felt that it wasn’t safe.”

“Before coming into college I didn’t have any Jewish friends,” Mihoc said. “I didn’t know any Jewish people, but I knew that I liked Israel based on what I knew from the Bible.”

Mihoc said she was inspired to learn more about Jewish people and get involved with groups that support Israel. She also said she witnessed ant-Semitism at her university in Detroit.

“We had this big ‘Israelpalooza’ is what we called it, where we had music and dancing and snacks and ice cream, and we brought in the organization Artists for Israel,” Mihoc told Fox News. “They were spray-painting a canvas of coexistence and peace and then we had a separate canvas for students to spray-paint whatever message they wanted.”

She went on to say, “At one point, a student stopped by and wrote something in Arabic and then left and we didn’t know what it meant, but we actually had a Muslim student who was a part of our group and he translated it for us and it said, ‘death to Israel.’”

Neither Wayne State nor the University of Cincinnati responded to Fox News’ requests for comment.

When asked what the Trump administration has been doing to curb anti-Semitism on college campuses Carr answered, “College campuses is a focus for our administration and in addition to all kinds of exciting initiatives that are being worked on as we speak, a year ago, a little more than a year ago, a groundbreaking decision by the Department of Education was issued that defines the Jewish people as an ethnic group.” 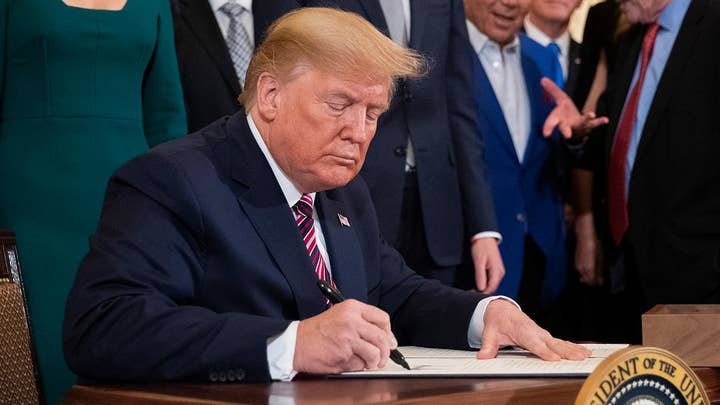 Carr continued, “Sadly, what’s happening on campuses, not only in the United States, but I was just in France and the U.K. and we’re seeing this around the world... Jews are being forced to make a choice between safety on one hand and connection to Zionism and the state of Israel on the other. And, it’s absolute anti-Semitism to tell a Jewish kid on a campus, ‘You want to be safe here, you have to absolutely divorce yourself from Zionism and from a connection to the state of Israel.’”

On Wednesday, Trump signed an executive order targeting anti-Semitism on college campuses. The order broadened the federal government’s definition of anti-Semitism and instructed it to be used in enforcing laws against discrimination on college campuses under Title VI. Under the order, the Department of Education could withhold funding from schools that it finds in violation of Title VI.

Carr also outlined other measures that have been implemented to curtail anti-Semitism across the country.

“The Department of Homeland Security has allocated a budget, a substantial budget, for augmenting security at Jewish facilities because of course security is job one,” Carr told Fox News, adding that multiple states have appropriated their own funds to augment security for Jewish facilities.

He said education has been key and needed to focus on highlighting the contributions of the Jewish people throughout history as a way “to get at the heart of this problem and cut anti-Semitism off at its evil source.”

“We’ve got to work with Internet platforms to make sure young kids aren’t necessarily dragged into vile anti-Semitic chat rooms when they type ‘Holocaust’ into Google,” he said. “These are all things that we are focused on doing and that we desperately need to do.”

The Associated Press contributed to this report. The video for this story was shot and edited by Talia Kaplan. Alexis Baker contributed to the filming of this piece. Fox News’ photo editor Carlos Bedoya provided the photos featured in the video.