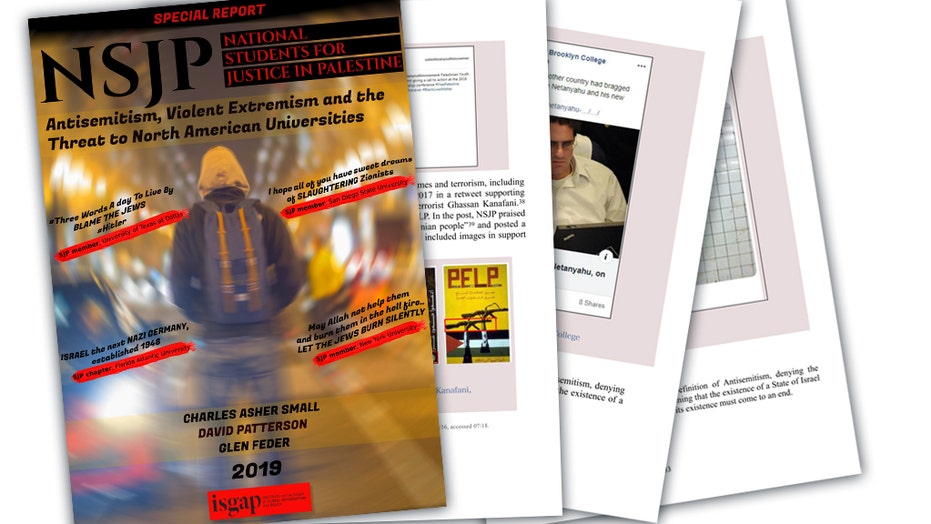 A report released Wednesday made the case that a pro-Palestinian student group at many colleges, National Students for Justice in Palestine (NSJP), “is a main driver of Jew-hatred on campus,” citing dozens of examples of alleged anti-Semitism involving the group’s members.

The Institute for the Study of Global Antisemitism and Policy (ISGAP) released the 96-page report titled “National Students for Justice in Palestine (NSJP) and the Promotion of Hate and Anti-Semitism on the University Campus: The Threat to Academic Freedom” ahead of NSJP’s conference at the University of Minnesota planned for this weekend. According to the authors of the report, NSJP has promoted anti-Semitic rhetoric and has been associated with “violence and terror ideologically and politically.”

ISGAP has conducted scholarly research into the origins, processes and manifestations of global anti-Semitism and other forms of prejudice, including racism.

A report released on Wednesday looked at the impact of the pro-Palestinian group National Students for Justice in Palestine on college campuses. (The Institute for the Study of Global Antisemitism and Policy)

The ISGAP report, which took about eight months of research, was written by Dr. Charles Asher Small, a research scholar at St. Antony’s College, Oxford, David Patterson, a professor at the University of Texas at Dallas and Dr. Glen Feder, an ISGAP research scholar.

Small, also ISGAP’s executive director and a former political science professor at Yale University, told Fox News on Wednesday that the institute started the research project because reports were surfacing “showing a significant increase of anti-Semitism on campus among students as well within curriculums.” Small, who directed the research project, said he was trying to understand why universities in America “have become purveyors of anti-Semitism.”

He told Fox News, “The discourse was changing so we were trying to understand why this was apparently happening.”

Small continued, “We started to look at funding of American universities by the Muslim Brotherhood and other political Islamist organizations and actors, so... we actually found billions of dollars going to the universities that have not been reported to the IRS or to the Department of Education as the law stipulates.”

Small said that report, which took about seven years to produce, was presented to the Justice Department this past July. Neither the Education Department nor the DOJ immediately responded to Fox News’ requests for comment.

“There was a summit on anti-Semitism and we presented our findings, and now this report is focusing on the National Students for Justice in Palestine. They have over 200 chapters in Canadian and American universities and we believe that they are sort of the shock troops of contemporary anti-Semitism on campus.”

NSJP was founded in 2010 at a forum sponsored in part by the Boycott, Divestment and Sanctions (BDS) National Committee, a coalition that allegedly included several U.S.-designated terrorist organizations, according to ISGAP’s report.

The report said NSJP regularly featured and expressed support for convicted terrorists at its events and throughout its social media, adding that the group’s leaders and official university chapters allegedly have spread anti-Semitism on social media platforms and at their national conferences.

It also pointed out that the student group’s “Points of Unity” statement called for “ending Israel’s occupation and colonization of all Arab lands.” ISGAP claimed that meant the destruction of the state of Israel.

As a guideline to fight anti-Semitism on campus, the report called on universities to adopt the International Holocaust Remembrance Alliance (IHRA) definition of anti-Semitism: bigotry against Jewish people often used by the U.S. government and other governments.

Dozens of examples showing NSJP and its members allegedly committed “gross violations of IHRA’s definition of anti-Semitism” were cited in the report.

One example of alleged anti-Semitism listed in the ISGAP report: a social media post apparently from a member of New York University’s Students for Justice in Palestine (SJP) chapter who wrote, “May Allah not help them and burn them in the hell fire... Let the Jews burn silently.” (ISGAP)

One example listed was a social media post apparently from a member of New York University’s Students for Justice in Palestine (SJP) chapter who wrote, “May Allah not help them and burn them in the hell fire... Let the Jews burn silently.”

The report noted that NYU’s SJP chapter was selected to receive the university’s President’s Service Award, an annual award given out to “recognize students and student organizations that have positively impacted the NYU community.”

“Did SJP achieve this distinction by staging an annual Israel Apartheid Week or by denouncing the 'Zionist entity' and its supporters as racist, colonialist, imperialist, and illegitimate? Just as the existence of the Jewish people was once deemed illegal by racists, so now is the existence of the Jewish State considered illegal – within the acceptable discourse on campus and in the classroom,” the report said. “Where will this lead? To a peaceful solution in the Middle East or to the importation of hatred?”

NYU did not immediately respond to Fox News’ request for comment.

“Leaders of this organization (NSJP) are spreading vile, vicious forms of anti-Semitism and they are intimidating students,” Small told Fox News. “They call for the elimination of the state of Israel and any form of Jewish sovereignty in the Middle East. And, anybody on campus that supports Israel or Israelis have become targets of a very aggressive campaign, be it faculty or students. They try to intimate and silence.”

National Students for Justice in Palestine did not immediately respond to Fox News’ request for comment.

Small told Fox News he hoped the new ISGAP report “will start to create awareness and a public conversation on academic freedom and incitement to hatred, and where do we draw the line?”