Exclusive - Rep. Andy Barr, R-Ky., on Friday reintroduced legislation to form a committee to look into China's handling of the COVID-19 pandemic.

Barr initially introduced the legislation, which had 80 Republican cosponsors, in April of 2020 after U.S. businesses and schools began shutting down.

"Over one year and 600,000 tragic American deaths later, we still don’t know the origins of the COVID-19 virus," Barr, who serves on the House Foreign Affairs Committee, said in a statement to Fox News. "That is why Congress needs to establish a bicameral, bipartisan investigation that will gain the trust and confidence of the American people to deliver the truth about COVID-19."

He added that there can be "no more delays and no more partisan inquiries."

Representative Andy Barr, a Republican from Kentucky, speaks during a news conference at the U.S. Capitol in Washington, D.C., U.S., on Thursday, May 20, 2021. (Samuel Corum/Bloomberg via Getty Images)

The resolution would establish the formation of a joint select committee "on the events and activities" surrounding China's handling of the virus that would include 10 members from the House and 10 members from the Senate appointed by the majority and minority leaders of each chamber.

The committee would conduct a "full and complete investigation" and report of the origins and causes of the virus, which dates back to November of 2019 in Wuhan, China; the Chinese government's subsequent policies, decisions and actions related to the origins of the virus; the Chinese government's efforts to "suppress facts" about the virus; China's influence on the World Health Organization's response to COVID-19 and so on.

Barr's resolution comes after reports surfaced indicating that there might be more to the so-called COVID-19 "lab leak" theory than some pundits and journalists initially speculated.

It also comes following reports that the Biden State Department ended an inquiry into the origins of the COVID-19 pandemic that was investigating whether the virus stemmed from a leak out of the Wuhan Institute of Virology, one of China’s top virus research labs, as Fox News previously reported.

Officials revealed last weekend that several workers at the virology institute fell ill in mid-November 2019, about a month before the first COVID-19 case was reported in the Chinese city.

A Sunday Wall Street Journal report citing previously undisclosed U.S. intelligence documents that found some of the lab workers who fell ill in 2019 required hospital care, lending weight to a theory that the virus may have originated from a lab and calls to investigate China's handling of the outbreak.

Security personnel gather near the entrance of the Wuhan Institute of Virology during a visit by the World Health Organization team in Wuhan in China's Hubei province on Wednesday, Feb. 3, 2021. (AP Photo/Ng Han Guan)

One official who spoke to Fox News and worked at the State Department during the Trump administration claimed to have been in touch with foreign government contacts when Wuhan lab workers first became sick and said colleagues also had been in communication with contacts about the issue.

The State Department told Fox News it would not comment on "purported intelligence matters."

The State Department acknowledged in January 2021 the "United States government has reason to believe that several researchers inside the WIV became sick in autumn 2019." It found that they'd experienced symptoms consistent with both COVID-19 "and common seasonal illness."

The Wuhan Institute of Virology built an archive of genetic information about bat coronaviruses after the 2003 outbreak of Severe Acute Respiratory Syndrome and has faced criticism over its transparency throughout the pandemic.

The paper reported that China has denied any allegation that the virus was somehow leaked from the lab. China accused the U.S. on Sunday of continuing its effort to "hype the lab-leak theory." 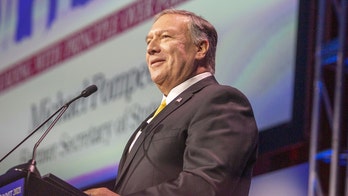