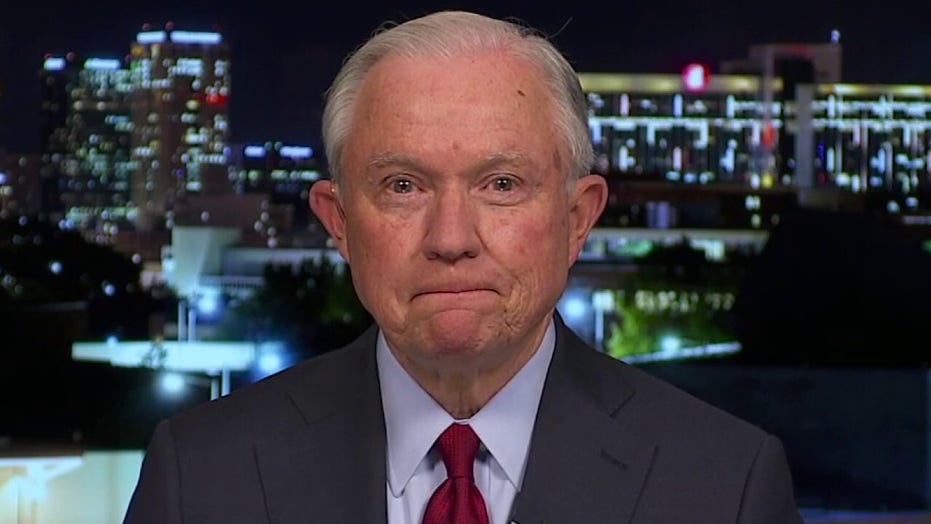 Former Attorney General Jeff Sessions reacts to the calls for Bolton to testify.

No one won the GOP nomination outright for the Alabama Senate, which means voters will head back to the polls for a runoff election later this month to determine whether former Sen. Jeff Sessions can mount a political comeback.

“Tonight, it looks like a great night for us and a bad night for the swamp," Tuberville told cheering supporters. "We’re going to overtime and I know somebody that knows how to win in overtime."

Alabama U.S. Senate candidate Tommy Tuberville, right, watches election returns and works on his speech in the main house at Auburn Oaks Farm, the site of his election party, Tuesday, March 3, 2020. Tuberville is in a tight race with seven competitors for the Senate seat. (Joe Songer/The Birmingham News via AP)

As the top two finishers, Sessions and Tuberville will face off again in the March 31 runoff election. The winner will become Republicans' best bet to pick off an accidental blue seat held by Democrat Sen. Doug Jones.

Coming up short was Bradley Byrne, a Republican congressman, who had 25 percent of the vote and failed to advance to the runoff. Roy Moore, former chief justice of the Supreme Court of Alabama, was a distant fourth place with 7 percent of the vote.

Sessions is seeking to reclaim the Senate seat he had for 20 years and gave up to become President Trump's attorney general. He's been running on his record of being close to Trump, despite the president repeatedly knocking him.

The state's Democrat senator, Doug Jones, squeaked out a victory in the red state in the 2017 special election over Moore, who was widely disavowed for allegations of past sexual misconduct with minors but had retained Trump’s endorsement.

In his election night speech, Sessions accused Tuberville of being a  "tourist" from Florida unfamiliar with the people of Alabama and unequipped to execute Trump's agenda in Washington.

"Where was he when President Trump needed him," Sessions said. "What did he do for Trump? Never said a kind word about him that I can find. Never gave a single penny of his millions to the Trump campaign. So one thing is clear. There is no doubt where I stand on the issues [and] no doubt of my support for Donald Trump and his agenda."

Sessions was the first senator to endorse Trump for his 2016 presidential bid and was rewarded with the attorney general position, a job he called the most meaningful of his life.

But Trump soured on Sessions when he recused himself from the FBI Russia probe that gave way to the appointment of Special Counsel Robert Mueller; Trump called Sessions the “biggest mistake” of his presidency.

Sessions resigned at Trump’s request in November 2018. He launched his political comeback a year later in a campaign ad that was mocked as a hostage video as Sessions stressed he didn’t write a “tell-all book” or say a “cross word” about Trump since he was ousted.

Meanwhile, Tuberville put Trump's name on the back of his campaign bus and said “God sent us Donald Trump” in his television ad. He's campaigned as an outsider who will stand with Trump on building a border wall, cracking down on illegal immigration and draining the Washington swamp.

Tuberville accused Sessions of abandoning Trump when times got tough in the Russia probe. In his Super Tuesday speech, he ripped Sessions for his untimely exit from Trump's cabinet.

“We’re going to finish what President Trump started when he looked at Jeff Sessions from across the table and said, ‘You’re fired," Tuberville said.

Byrne came out with a tough ad in the final days of the campaign mocking both Sessions and Tuberville for getting "fired" from their past jobs.

Tuberville was asked to resign as coach of Auburn after a rough 2008 season.

"And Hillary [Clinton] still ain't in jail," the ad says of Sessions.

The big wildcard will be whether Trump endorses in the head-to-head matchup between Sessions and Tuberville. The winner will face Jones in November.