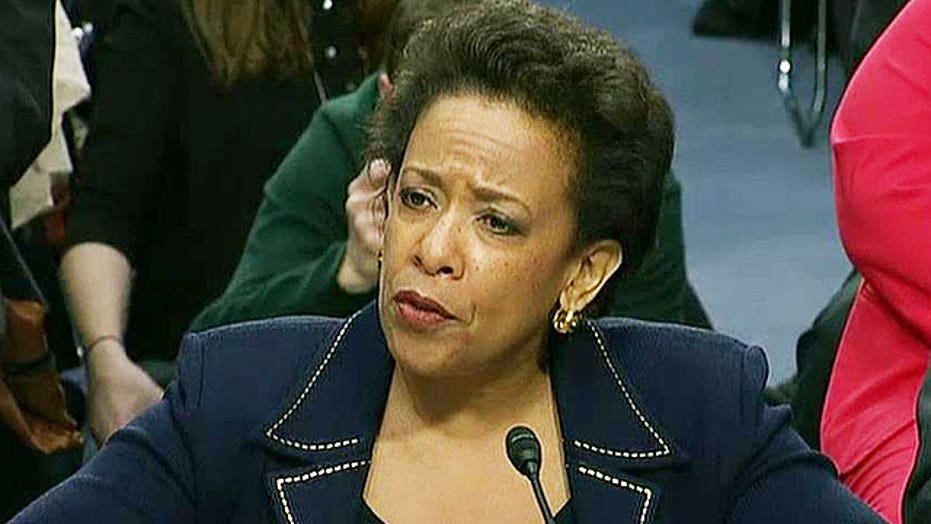 Loretta Lynch works to differentiate herself from Holder

Attorney general nominee Loretta Lynch backed up President Obama on his controversial immigration executive actions during her confirmation hearing Wednesday -- while going as far to say she believed in an illegal immigrant's "right" and "obligation to work."

Lynch, who is in line to succeed Eric Holder if confirmed, fielded a barrage of questions on the opening day of her Senate hearing on the Obama administration's moves to spare millions of illegal immigrants from deportation and offer them work permits.

In a carefully worded response, Lynch told lawmakers on the Senate Judiciary Committee she's read the Office of Legal Counsel opinion and other papers that helped justify much of what the Department of Homeland Security is doing. She said they seem a "reasonable discussion" of the law.

"I don't see any reason to doubt the reasonableness of those views," Lynch said, adding that the department always must review such matters "carefully."

While clarifying it's not her role to "support or not support" the legal justification, Lynch went on to back up components of the administration's policy.

Under questioning from Sen. Jeff Sessions, R-Ala., who asked whether legal residents or illegal immigrants have more of a right to a job, Lynch said everyone should be able to work.

She acknowledged there's no civil right in the law for illegal immigrants to get citizenship and that employers still have to abide by the nation's immigration laws.

The immigration issue dominated the opening day of the hearing.

Sen. Chuck Grassley, R-Iowa, chairman of the committee, was highly critical of Obama's plan to spare millions of illegal immigrants from deportation as he questioned Lynch on the matter.

He told Lynch that "common sense" would dictate it is "impossible" to apply such an exception on such a broad basis.

Lynch, while backing the "reasonableness" of the legal guidance, repeatedly reminded lawmakers she was not involved in the immigration action review.

Republican lawmakers also sought to probe whether Lynch would bring a different style to the leadership of the department than Holder, who has had a contentious relationship with Congress.

Grassley, in his opening remarks, said he wants to know if the nominee can "fix" the department -- which he called "deeply politicized."

Grassley suggested the attorney general post has been used to represent Obama, not necessarily the American people. He complained that legal memos have sanctioned "the unprecedented authority that [Obama] claims to possess."

He said those opinions should be impartial. "They shouldn't be transparently self-serving attempts to justify whatever the president or an attorney general wants to do for political reasons," Grassley said.

Later on in the hearing, Lynch assured lawmakers: "If confirmed as attorney general, I will be myself. I will be Loretta Lynch."

Wednesday's session was the first Republican-led confirmation hearing of the Obama administration, with Republicans in control of the Senate for the first time since Obama took office.

If approved, Lynch would become the first black female attorney general. She is now the U.S. attorney for the Eastern District of New York. Lynch would replace Holder, who announced his resignation in September after leading the Justice Department for six years.

Holder was a lightning rod for conservative criticism and clashed with congressional Republicans. By contrast, Lynch has already earned praise from several of the GOP members of the Judiciary Committee and is widely expected to win confirmation.

But first she faces tough questions from committee members on immigration, police misconduct and other issues.

Lynch was also asked early on about the controversy over the IRS targeting Tea Party groups and other conservative organizations when they applied for tax-exempt status several years ago. Addressing some confusion over whether the matter is still being investigated, Lynch said she is "generally aware that there is an investigation going on."

In her opening remarks, Lynch vowed that the Constitution "will be my lodestar as I exercise the power and the responsibility of that position." She also said fighting terrorism -- preventing attacks and bringing terrorists to justice -- will be the department's primary mission.

Sen. Chuck Schumer, D-N.Y., who introduced Lynch to the committee, called the nominee "eminently qualified" but said some are trying to drag "extraneous issues" into the fray because "they can't find anything in her record to point to."

Obama nominated Lynch in November 2014 when Democrats controlled the Senate through the end of the year. However, Republicans were able to hold off the confirmation process until they took charge of the Senate in January, as a result of the elections, arguing committee members from both sides needed more time to prepare.