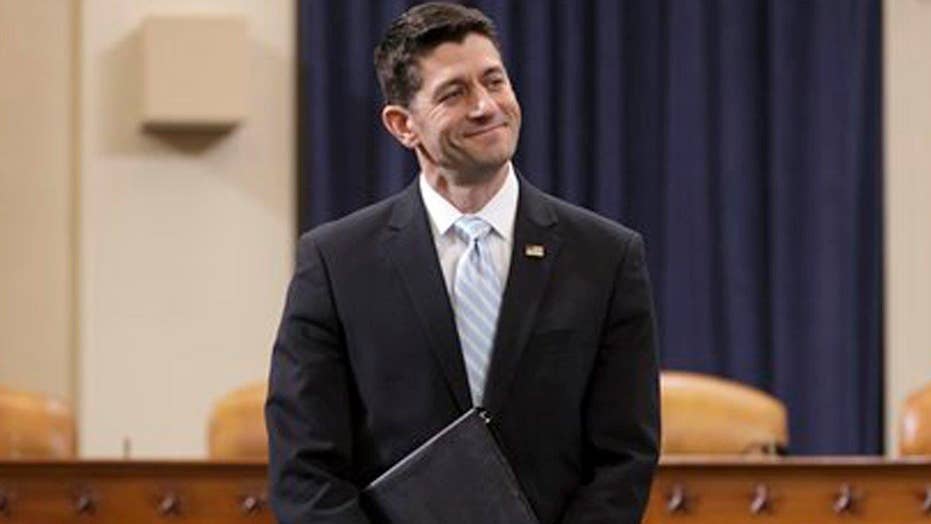 Tammy Bruce and Basil Smikle on the Wisconsin race

Few people in Washington think House Republicans this year will complete a budget.

Republicans have batted around dozens of ideas. They’ve conducted closed door meetings. Entertained options. And still, House Republicans aren’t much closer to solving the budget riddle than they were when conversations began over the winter.

“The leadership has been on a listening tour for three months,” said Rep. Dave Brat, R-Va. “We have to go back to constituents and say we made up for the crap sandwich. Made up for the barn cleaning.”

What Brat refers to is a plan President Obama forged last fall with then-House Speaker John Boehner, R-Ohio, to “clean the barn” for the next speaker.

Both houses of Congress approved the package, and Obama signed it into law. Only 79 House GOPers voted in favor of the measure in late October -- including new House Speaker Paul Ryan, R-Wis.

The deal established what’s called “discretionary” spending numbers for this fiscal year and fiscal 2017, which begins in October 1.

“We are being asked to validate a spending level that the vast majority of Republicans in the House and Senate opposed months ago,” said Rep. Jim Jordan, R-Ohio. “Let’s do a budget and spend less money. I think that’s what voters are demanding after what you’ve seen in the presidential contest. We make this stuff way too complicated.”

A brief dive into the complicated stuff:

All federal spending is allocated into two chunks. “Mandatory” spending is what the government has to spend on entitlement programs such as Medicare, Medicaid, Social Security and interest on the debt.

Congress long ago passed laws that put these programs on automatic pilot. Mandatory spending consumes more than two-thirds of all federal dollars each year. That money just floats out the door without anyone raising a finger.

“Discretionary” spending is the rest. It’s discretionary because lawmakers have discretion over how much to spend and on what programs. Discretionary dollars account for the remaining third of all annual government spending.

But here’s the issue: Congressional conservatives are pushing for $30 billion in reforms to mandatory spending programs. That could reduce the discretionary number to $1.047 trillion. That would make it challenging for the House to approve annual spending bills to fund the government after October 1.

Conservatives have pushed for deep cuts and reductions since Republicans claimed the House in 2010. They made minimal progress in the debt-ceiling agreement of 2011 that resulted in sequestration -- deep, required spending limitations on the discretionary side of the ledger.

But the mandatory spending side is much larger than the discretionary side. That’s why reforms to entitlements make more impact. And conservatives want proof that savings aren’t fiscal fairy dust.

“It needs to be real,” Jordan said.

What counts as “real?” A plan Obama would in fact sign into law.

“That would be pretty real,” Rep. Matt Salmon, R-Ariz., said when asked about moving a measure that would earn the president’s signature.

“It’s got to be this year,” said Rep. Tim Huelskamp, R-Kansas. “Real cuts that actually get signed into law.”

Conservatives think the GOP-led House has never made good on promises lawmakers made to constituents to reduce overall federal spending. Hence, that’s why they want to show they’re making amends for Boehner’s barn cleaning.

That’s why Republicans can’t cobble together the votes to approve a budget. The Republican brass needs the help of at least some of the 40-plus members who comprise the House Freedom Caucus. But there will be no budget if party divisions remain this deep.

But if the House will produce a budget this year, the production of budgetary “sidecars” are key to the entire enterprise.

“That’s getting warm,” said Brat of the sidecar possibilities. “We’re willing to go there.”

One sidecar option is for the House to approve a budget for fiscal 2017 at the $1.070 trillion level, but include a separate package that mines $30 billion in cuts from mandatory programs.

There is also conversation about approving a budget at a lower spending threshold -- with an agreement that Obama would sign actual spending bills into law with higher dollar figures.

Conservatives feel burned before on broad agreements. It’s customary for policymakers to commit to spending cuts but postpone the hard stuff well into the future.

Conservatives want to get away from that kind of gimmickry.

“We could have $30 billion (in cuts) over ten years with most of the savings in the ninth and tenth years,” said Huelskamp with a smirk, knowing the way Washington usually does things.

Notably, Huelskamp wasn’t endorsing punting the savings until the out years.

The House Budget Committee last week approved a budget that balances the books in a decade and slashes spending by $6.5 trillion.

Included in that budget is a repeal of ObamaCare. But keep in mind that congressional budgets aren’t binding and not signed into law. They’re aspirational.

The panel passed the budget. However, Budget Committee Chairman Tom Price, R-Ga., knew there were several GOPers who voted yes in committee who would vote no on the budget on the floor. Dave Brat and Rep. Marlin Stutzman, R-Ind., voted no in committee.

There’s a problem with not doing a budget. Failing to agree to an overall topline for mandatory and discretionary spending makes it virtually impossible for lawmakers to begin approving annual appropriations bills that fund the government.

There is a parliamentary failsafe that Ryan could deploy to help initiate the appropriations bills. It’s possible the House could simply hook some language to another measure and “deem” that it passed a budget -- even if it really hasn’t.

In Congress, “deeming” a budget at least starts the appropriations process. But Ryan is ruling out such a tactic.

Regardless, the House Appropriations Committee prepared its first spending bill of the year a few days ago.

The committee sketched a plan to spend $81.6 billion on military construction projects and fund the Department of Veterans Affairs. The bill represents $1.2 billion less than what Obama requested but is $1.8 billion above what lawmakers spent last year.

Of course, if the House can’t OK a budget at all -- or even deem a budget -- it’s likely Congress is stuck and must approve a gigantic interim spending bill in September to avoid a government shutdown.

Only some Republicans would be likely to vote for it. The GOP leaders would probably again turn to Democrats to bail them out.

And this is precisely what got Boehner in trouble with House Republicans: leaning on Democrats all the time to do the tough stuff.

A stopgap spending bill means the military construction/VA measure gets less money -- as do all of the other appropriations bills in the big, catchall bill.

That’s because not doing a budget and relying on old spending figure kicks the total discretionary figure back to what the government is spending this year: $1.067 trillion -- a cut of $3 billion.

As former House Budget Committee chairman, Ryan is the high priest of budgets. He authored multiple fiscal blueprints that Republicans embraced. He chastised Democrats when they failed to produce budgets.

This is why Ryan and Republicans know why it’s so important to produce a budget and adopt it on the floor. This is all on them. But as speaker, Ryan can only attest to the virtues of budgeting. This fight is internal, Republicans on Republicans.

Last time, they blamed Boehner. But he isn’t here anymore.

“Once Obama leaves office, there is nobody left to blame,” Huelskamp said.