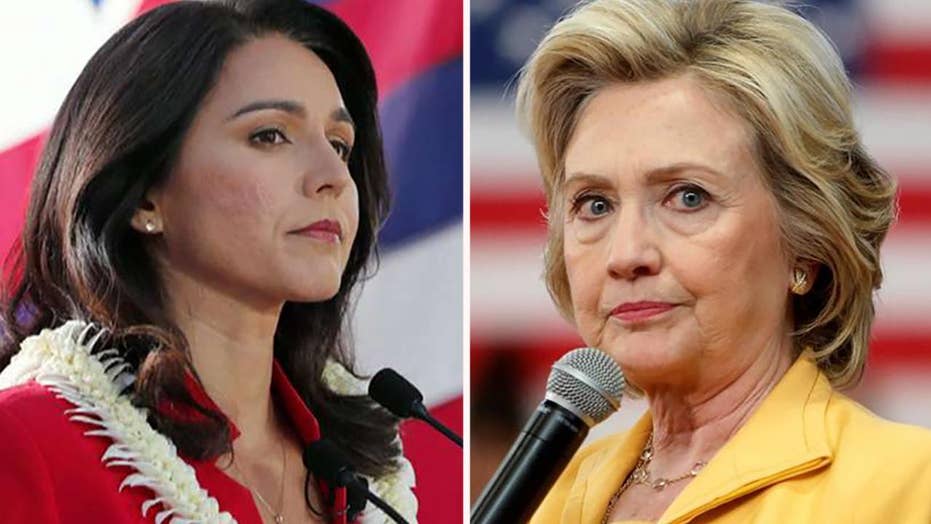 Washington Examiner senior political correspondent David Drucker examines the history of the feud between the Democrats.

A growing number of 2020 Democratic presidential hopefuls are rallying to fellow candidate Tulsi Gabbard’s defense after Hillary Clinton claimed the Russians are “grooming” the Hawaii congresswoman to be a third-party spoiler in the race and suggested Gabbard is really a Russian asset -- a claim Gabbard has decried as an unfounded smear.

"Tulsi is not being groomed by anyone. She is her own person," former Texas Rep. Beto O'Rourke said over the weekend.

Speaking to The Hill, O'Rourke added: "Obviously has served this country, continues to serve this country in uniform, in Congress, as a candidate for presidency so I think those facts speak for themselves."

Gabbard, a Hawaii Democratic congresswoman, and Clinton have been sparring since the 2016 Democratic presidential nominee went on a podcast with former Obama adviser David Plouffe last week and said she wasn’t “making any predictions, but [thinks Russians] have got their eye on somebody who is currently in the Democratic primary and are grooming her to be the third-party candidate.”

“She’s the favorite of the Russians,” Clinton added, saying they “have a bunch of sites and bots and other ways of supporting her so far. “

Clinton’s podcast performance prompted Gabbard to respond forcefully on Twitter, calling her the “queen of warmongers, embodiment of corruption and personification of the rot that has sickened the Democratic Party!”

An increasing number of other 2020 Democratic candidates have positioned themselves in Gabbard's camp, rejecting Clinton's claims, defending Gabbard and attempting to shift the conversation to other topics.

Entrepreneur Andrew Yang defended Gabbard, saying she “deserves much more respect and thanks than this.”

“She literally just got back from serving our country abroad,” Yang tweeted. Gabbard is a Hawaii Army National Guard major who served in Iraq.

“The Democratic establishment has got to stop smearing women it finds inconvenient!” she tweeted. “The character assassination of women who don’t toe the party line will backfire. Stay strong @TulsiGabbard. You deserve respect and you have mine.”

South Bend, Ind. Mayor Pete Buttigieg, also a veteran, was asked on CNN whether he felt Gabbard was a Russian asset and said: “I don’t know what the basis is for that.”

“I’d prefer to have the conversation be about policy, about what we’re going to do, and about how American lives are going to be different,” Buttigieg said Sunday. “When it comes to any of my Democratic competitors, that’s my focus, making sure that we make very clear the differences—and there are very real differences among us—and making it clear to voters what their choices are. That’s where I’d like the focus to be.”

But some candidates like John Delaney -- while making clear he doesn't agree with Clinton's claim -- trod carefully as to not upset either Gabbard or Clinton. 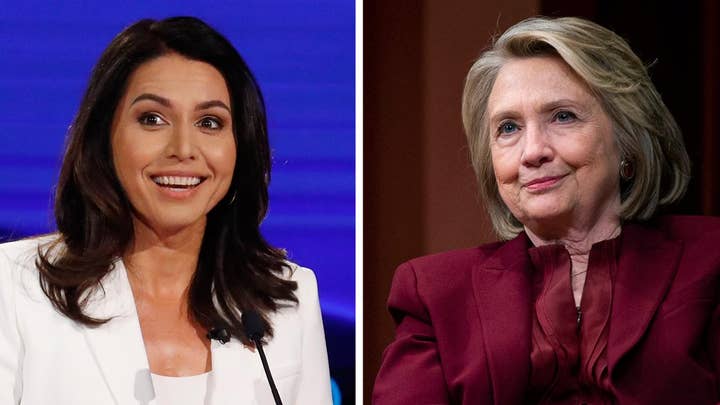 “I consider Tulsi to be a very good friend. As best I can tell, there’s absolutely no basis for any of those allegations,” Delaney said, while noting he holds Clinton “in the highest regard” and “was a huge supporter for 2016.”

Others, like former Vice President Joe Biden, are distancing themselves from the issue. His campaign declined to comment Monday

Meanwhile, Gabbard herself posted a video message over the weekend claiming Clinton’s accusation was simply payback for her defiance of the party establishment during the 2016 presidential election.

“If they can falsely portray me as a traitor, then they can do it to anyone—and in fact, that’s exactly the message they want to get across to you,” Gabbard said in the video. “If you stand up to Hillary and the party power brokers—if you stand up to the rich and powerful elite and the war machine, they will destroy you and discredit your message.”

Gabbard started the video by referencing her time as the vice chairwoman of the Democratic National Committee (DNC) from 2013 to 2016, before she quit and endorsed Sen. Bernie Sanders, I-Vt., during the 2016 Democratic primary. At the time, Gabbard accused leaders of the party of stifling her freedom of speech and unfairly tipping the scales in favor of the eventual nominee, Hillary Clinton.

“People warned me in 2016 that my endorsement of Bernie Sanders would be the end of my ‘political career’—they said Clinton would never forget…that she and her rich and powerful friends—her allies in politics and the media—will make sure you’re destroyed,” she said in the video.

She went on to say that “countless hit pieces full of smears” have been published in an effort to “destroy” her reputation, which includes years of military and congressional service.

For his part, Sanders tweeted Monday evening: "Tulsi Gabbard has put her life on the line to defend this country. People can disagree on issues, but it is outrageous for anyone to suggest that Tulsi is a foreign asset."

Meanwhile, President Trump blasted Clinton on Monday, saying she's "accusing everyone of being a Russian agent."

"These people are sick," Trump told reporters from the White House. "There's something wrong with them."

The claim of Gabbard being a Russian asset first hit the mainstream during last week’s CNN Democratic presidential primary debate when Gabbard called out news outlets for what she called a propaganda campaign against her.

“The New York Times and CNN have smeared veterans like myself for calling for an end to this regime-change war," Gabbard said. "Just two days ago, The New York Times put out an article saying I'm a Russian asset and an Assad apologist, and all these different smears. This morning, a CNN commentator said on national television that I'm an asset of Russia. Completely despicable."

Clinton herself, meanwhile, has come under scrutiny for raising money secretly from Russians when she was secretary of state. "Cash Flowed to Clinton Foundation Amid Russian Uranium Deal," read a 2015 headline in the Times.

CNN political commentator Van Jones echoed Gabbard's argument on-air, and called out Clinton's "disinformation" -- saying "she just came out against a sitting U.S. congresswoman, a decorated war veteran, and someone who's running for the nomination of our party, with just a complete smear and no facts."

Jones continued: "This is a very, very dangerous game -- and there's a backstory here. Let's not forget: Tulsi Gabbard was picked out by the Democratic Party establishment and put at the top of the DNC, and they thought she was going to be their golden girl. And, she got in that position in the DNC, and she looked around, and she saw [then-DNC Chairwoman] Debbie Wasserman-Schultz and other people, Clinton allies, doing stuff they shouldn't have been doing in the primary.

"And, Tulsi publicly quit and then endorsed Bernie Sanders, and it's been payback hell ever since," Jones said.

Fox News' Mike Emanuel and Gregg Re contributed to this report.