Democrats push back against Pelosi as speaker

Sixteen House Democratic lawmakers circulated a letter Monday vowing to vote against Nancy Pelosi for speaker of the House, calling for "new leadership" --  even though no challenger has stepped up to run against the California Democrat.

“We are thankful to Leader Pelosi for her years of service to our Country and to our Caucus. She is a historic figure whose leadership has been instrumental to some of our party’s most important legislative achievements,” the letter from both incumbent and newly elected Democrats read. “However, we also recognize that in this recent election, Democrats ran and won on a message of change.”

Announcing plans to oppose Pelosi, the lawmakers wrote: “Our majority came on the backs of candidates who said that they would support new leadership because voters in hard-won districts, and across the country want to see real change in Washington. We promised to change the status quo, and we intend to deliver on that promise.”

Ben McAdams, D-Utah, also signed onto the letter, though returns show him trailing in his uncalled midterm race to Republican Rep. Mia Love.

“We are committed to voting for new leadership in both our Caucus meeting and on the House floor,” the letter stated.

Fox News previously reported the existence of this letter, though one name was left off the final version: Rep. Marcia Fudge, D-Ohio, who has said she is considering a run against Pelosi and plans to announce her decision after Thanksgiving. 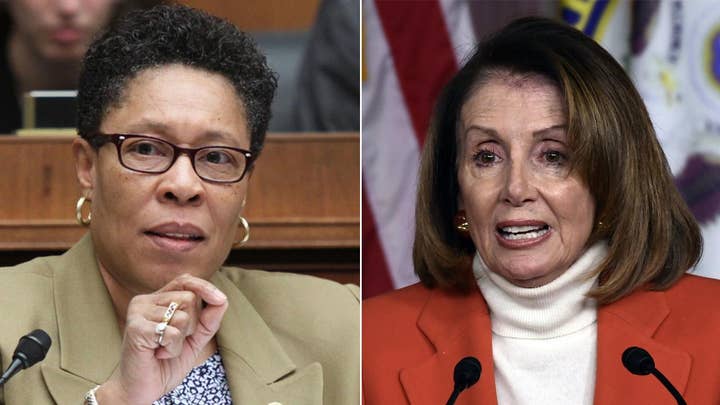 “People are asking me to do it, and I’ am thinking about it,” Fudge told a local news outlet last week. “I need to give it some thought and see if I have an interest. I am at the very beginning of this process. It is just in discussion at this point.”

Back in 2016, Ryan challenged Pelosi for House minority leader but was defeated in the closed-door caucus vote. His office has yet to close the door on a potential run for speaker, but has not committed one way or another.

The possibility of political retaliation could be keeping others out of the race, though congressional sources denied to Fox News that Pelosi would do that, saying she is “not spiteful.”

“The political repercussions for trying to block Pelosi will be more pronounced outside the Congress than inside,” a congressional source said. “Outside, for the past two years, voters have organized themselves with great energy and passion to take back the House. Blocking Pelosi will be viewed by many as disruptive to the progress so many worked so hard to make.”

The source suggested that the “disrupter” could then attract a “primary challenge in 2020.”

If 17 Democrats vote against Pelosi on the floor, she would not have the votes, from her party, to secure the leadership post. To get the gavel, Pelosi would first need to pick up a majority of the Democratic Caucus in internal leadership elections, then go on to win an absolute majority of the House.

But in recent days, Pelosi has gained an unlikely supporter—President Trump—who has vowed to get her Republican votes if needed.

“I like her, can you believe it?” Trump told reporters on Saturday. “She’s tough and she’s smart, but she deserves to be speaker.”

He added: “I don’t imagine she’d need too many but whatever number of votes she needs, if it’s 50, or 10, or two, or one, she’s got them from me—automatic. So tell her opposition they’re wasting their time.”

Pelosi, who has repeatedly said she is “confident” she will take back her post as House speaker, which she held from 2007-2011, recently dismissed the idea she may need Republican support.

She added that she has “overwhelming support” in her caucus, and said: “I intend to win the speakership with Democratic votes.”