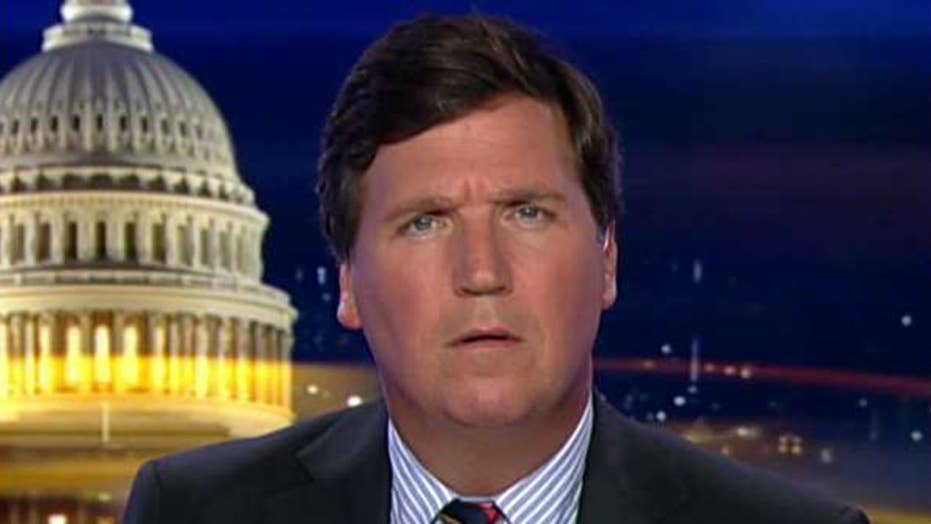 Looking back, January of 2017, it seems like another age. So much has happened in the years since then. But in other ways, not that much has changed at all.

Donald Trump had not even taken the oath of office yet, but by the first week of the New Year of 2017 -- in case you don't remember -- permanent Washington had already committed to destroying his presidency. And Trump seemed to know it.

A little after 8:00 p.m. on the night of January 3, 2017, the president-elect wrote a tweet. He took a veiled dig at U.S. intelligence agencies for their handling of the then-newly initiated Russia investigation.

TUCKER CARLSON: WASHINGTON'S RULING CLASS HAS BEEN THINKING ABOUT IMPEACHING TRUMP EVEN BEFORE HE WAS ELECTED

And pretty much the same moment, Democratic Senator Chuck Schumer of New York was arriving at MSNBC's midtown Manhattan Studios. He went to the set and the anchor of the show he was on that night, Rachel Maddow, pulled up Trump's tweet on a screen, live on TV, and asked Chuck Schumer to comment on that tweet. He hadn't seen the tweet before, of course, he couldn't have known it was coming.

For one of the most calculating politicians in Washington, it was a rare unscripted moment. And so, for the first time in a long time, Chuck Schumer just went with the unvarnished truth. Here's what he said:

"Let me tell you, you take on the intelligence community, they have six ways from Sunday at getting back at you. So even for a practical, supposedly hard-nosed businessman, he is being really dumb to do this.

Schumer went on to say he didn't know exactly what the spy agencies would do to Donald Trump as punishment for being dumb enough to criticize them in public. But he warned and this is a verbatim quote: "From what I am told, they are very upset about how he has treated them and talked about them." Very upset. Got it?

There's no mistaking what that was. That's a threat issued on live television with grave seriousness by a politician who has been in Washington long enough to know that it's absolutely real.

In the end, Donald Trump ignored it, or more likely, he decided to defy it. Day after day, he gave the finger to the permanent Washington establishment, often on Twitter, sometimes at press conferences, but always with unmistakable relish.

Trump acted like a man who had won an election in a democratic country. He seemed to feel free to say exactly what he really thought. He didn't appear to believe that the intelligence agencies had veto power over his agenda.

In a thousand different ways, the new president refused to bow. And for that crime, more than any other crime, he was punished, most recently by the manufactured Ukraine scandal.

The intel world meanwhile, has become increasingly defiant. On Wednesday, former CIA Director John Brennan expressed outrage that anyone would dare impose oversight on the intelligence agencies that secretly oversee our lives. Here's what he said:

"I'm supposedly going to be interviewed by Mr. Durham as part of this non-investigation. I remember William Barr, you know, when he was testifying in front of Congress, he said he didn't understand the predication of the counterintelligence investigation that was launched into Russia's interference in the 2016 election.

I don't understand the predication of this worldwide effort to try to uncover dirt either real or imagined that would discredit that investigation in 2016 into Russian interference."

Well, John Brennan is a naked partisan, and he is a liar. He has acted in ways that would have shocked and horrified previous CIA Directors and that's saying a lot. But John Brennan is not ashamed. Far from it, he is proud, and so are his many acolytes in Washington.

Phil Mudd is a former CIA employee, like so many partisans from the intelligence world, he is now a contributor at CNN. On Wednesday night Mudd said on-air warning to the president and his lawyer -- back off or prepare to get hurt. Hre's what he said:

"I spent a lot of time in government. There are State Department officials who will testify; Intel guys, DoD - Department of Defense people, all of us are sort of a brotherhood and sisterhood.

Rudy Giuliani parachutes in from Mars. The people who will testify are going to look at him, including State Department officials and say, I don't have to protect that guy. He didn't operate by the rules. He didn't do what you're supposed to do in government. I suspect, he is worried about what the Congress will do.

If I were him, I'd be worried about whether people in government stick a shiv in his back. He is in trouble."

So it's a brotherhood, says Phil Mudd, the CIA, a brotherhood that will stab you to death if you disobey. What Phil Mudd is describing is not a conventional government agency. It is nothing like what most of us imagine when we think about what Washington is doing on our behalf.

The CIA of John Brennan and Phil Mudd does not exist for our benefit. It exists solely for the benefit of the people who work there. We pay for the whole thing, but they do what they want and they punish anyone who criticizes them. They brag about that.

Now, that's scary, of course. It's a perversion of democracy. It's exactly what the people who created the CIA feared most. But it's, also, if we are going to be honest, it's annoying, because for all of the hype, the CIA in the end, isn't even very good at its job.

Now, remember, this is an intelligence agency. So it's fair to judge their performance against whether or not they predicted crucial events over the past 70 years. And again, and again, they didn't.

The CIA, for example was shocked by the Korean War. It didn't predict the Soviet atomic bomb, not a small thing. It missed the Cuban Missile Crisis and the 1973 Arab-Israeli war. It spent decades trying to bring down Fidel Castro -- to kill Fidel Castro. So naturally, his regime never fell, Castro lived into his 90s.

We know the C.I.A. spent decades propping up the Shah of Iran, so naturally, he tumbled from power. They didn't even provide a warning before that happened because they had no idea it was going to happen.

When the Iron Curtain finally fell in 1989, the CIA was completely blindsided by it. They thought they had just predicted in fact that Soviet Union was as strong as ever. And things didn't get better after that.

The CIA had no idea that Saddam Hussein planned to invade Kuwait the next year, in 1990. They were totally surprised by India's atomic bomb test eight years later. By 2003, they were totally confident that Iraq had weapons of mass destruction. In fact, their biggest success in the past 50 years may have been creating the Taliban.

If John Brennan had been working for a for-profit business, there would have been a shareholder revolt a long time ago and probably criminal charges. He would have been John DeLorean. But because it's a secretive government agency, the CIA has not been restrained. In fact, it's only become more powerful and more autonomous. Powerful enough to take down a president? We'll see.

One reason that permanent Washington is so powerful, of course, so resistant to change your oversight is that it makes alliances with some of the least impressive, but most ambitious members of Congress.

Just days ago, for example, House Intelligence Chairman Adam Schiff claimed his office had no contact whatsoever with the CIA whistleblower.

REP. ADAM SCHIFF, D-Calif., We have not spoken directly with the whistleblower, we would like to --

Schiff also claimed to know nothing about what was in the whistleblower's complaint before it came out. But Wednesday, The New York Times revealed that both of those claims were lies.

Schiff apologized in a way, saying he that he, "should have been much more clear."

Schiff now admits his office spoke to the whistleblower, who by the way, we learned tonight is a registered Democrat, but insists his office did nothing to shape the complaint itself. But why would we believe that at this stage?