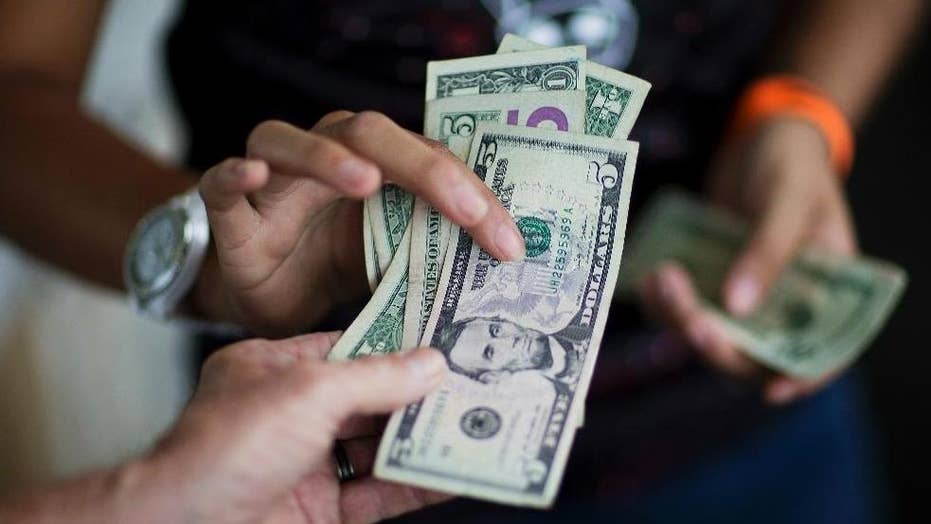 Why the US economy needs tax cuts: Huckabee

Former Arkansas Governor Mike Huckabee explains why tax cuts are a boon to the U.S. economy.

President Trump is a true champion of the middle class. Thanks to his policies, American families are more prosperous than ever before.

Real median household income in the U.S. – a reliable measure of middle-class prosperity – eclipsed $65,000 in July for the first time ever.

Remarkably, median household income has increased by more than $4,000 since Trump’s inauguration, meaning that the president’s pro-growth policies managed to grow the income of middle America by 6.8 percent in less than three years.

That accomplishment is even more impressive when compared to the disastrous economic record of President Barack Obama, who was only able to raise incomes by a fraction of that amount over the course of a much longer timespan.

Under Obama, median household income only grew by about $1,000 between the end of the Great Recession in mid-2009 and Trump’s inauguration in January 2017.

The contrast dramatically underscores the extent to which government policy affects the day-to-day lives of ordinary Americans.

Trump achieved the lowest unemployment rate in half a century – as well as the fastest wage growth in over a decade – by removing obstacles to the success of American workers and businesses.

Trump’s most high-profile economic policy accomplishment, of course, is the Tax Cuts and Jobs Act, which saved the average taxpayer about $1,400 on federal income taxes last year. Notably, that’s in addition to the $4,144 increase in pre-tax incomes, meaning today’s workers have an average of an extra $5,500 in their bank accounts as a result of the Trump presidency.

Equally important, however, have been his less-noticed successes, such as slashing the burdensome and unnecessary federal regulations that proliferated under Obama and stifled entrepreneurialism in this country.

More impressive still, Trump has achieved all this despite relentless obstruction by the Democratic Party, which has been so obsessed with undermining his presidency that his signature tax cut bill passed Congress without a single Democratic vote – even though that one piece of legislation provided more economic benefits to middle-income Americans than Obama’s entire presidency.

After a decade of stagnation, President Trump has finally restored prosperity to America’s middle class – returning it to its rightful place as the engine of our economy and the envy of the world.

Of course, Trump’s unprecedented success in empowering the millions of formerly forgotten Americans who had been ignored for so long by the political establishment is precisely what makes him a political target in Washington. The Democrats are more concerned with winning the 2020 presidential election than with enhancing the well-being of working Americans.

That much is undeniable in light of the fact that virtually every Democratic presidential candidate is vowing to repeal the full range of President Trump’s rejuvenating economic policies and replace them with radical, big-government initiatives. These initiatives are taken straight from the Marxist playbook of unabashed socialists such as Sen. Bernie Sanders, I-Vt., and Rep. Alexandria Ocasio-Cortez, D-N.Y.

The future of the great American middle class is in our hands. Prior to President Trump, it had been decades since working Americans had a true champion in the White House, and it could be decades more before another one comes along. We simply can’t afford to miss out on the opportunity for four more years of progress in the strong and growing Trump economy.