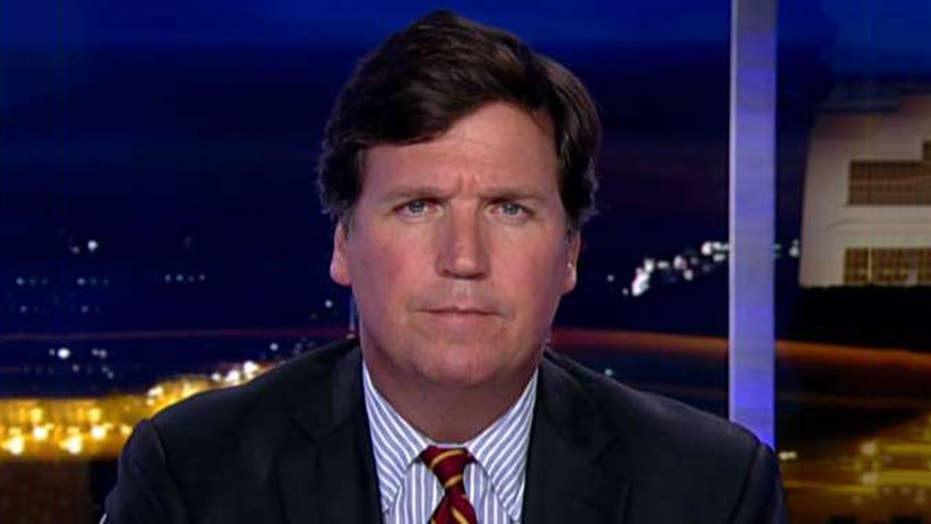 Tucker: Russian collusion is not a real story

The United States, as every fourth grader learns, is a meritocracy. What does that mean? Well, it means that our leaders do not inherit their position as they do in say, Brunei or Saudi Arabia. Our leaders are selected on the basis of merit.

Their talents and abilities are identified usually in school and then up they go from there and that's why only the smartest kids, we're told, get into Yale -- undeniably incandescent minds like Cory Booker, Chris Cuomo, and the kids of other Democratic officeholders. "Nerds," they call themselves with false modesty. The ordinary among us, meanwhile, go to Rutgers.

In this country the hard truth is -- and get used to it, pal -- is that the most impressive naturally rise to the top. That's what they tell us.

Do you still believe that? Or are you starting to suspect that the whole meritocracy speech might just be an elaborate justification for keeping mediocre people in charge? Hmmm.

Before you make up your mind on that question, consider Russia -- not the nation of Russia, that hasn't changed in a while. Russia is still a cold and vodka-soaked and only marginally relevant place, at least from the perspective of the United States.

No. Consider instead how a ruling class views Russia. To them, Russia is the single most important country in the world. Nothing else comes close. Just on Sunday on "Meet the Press" over on NBC, anchor Chuck Todd -- who by the way is a poster child for the modern meritocracy, and therefore by definition a genius, unlike you --  stopped a sitting U.S. senator in his tracks and all but accused him of spying for Russia.

Sen. John N. Kennedy, R-La.: In December of 2018 a Ukrainian court ruled that Ukrainian officials had violated Ukrainian law by meddling in our election and that was reported in the New York Times.

Chuck Todd, host of "Meet the Press": According to the New York Times a couple weeks ago, U.S. senators were briefed after Fiona Hill's testimony that actually this entire effort to frame Ukraine for the Russian meddling of 2016 -- of which you just made this case that they've done it -- that actually this is an effort of Russia propaganda. That this is a Russian intelligence propaganda campaign in order to get people like you to say these things about Ukraine. Are you at all concerned you're doing Russian intelligence work here?

"Are you at all concerned that you're doing Russian intelligence work? Well, gee, Chuck, now that you put it that way ..."

That's pretty funny. But what's funnier -- what's weirder, certainly --  is that we're still talking about Russia at all.

We now know it's not really a story. It never happened. There was no collusion. Russia didn't hack our democracy. The whole thing was a talking point, a ludicrous talking point, invented by the Hillary Clinton campaign on or about November 9th, 2016 to explain their unexpected defeat in the last presidential election.

"We lost and we shouldn't have lost." From the start that has been the only argument that underpins the Russia conspiracy theory. And now, thanks to a multi-million dollar investigation that extended over a period of years that the rest of us had to endure to the exclusion of everything else, that conspiracy theory has died. It was killed, in fact, by Robert Mueller.

And yet somehow it lives on in the sneering accusations of our mindless public intellectuals and hair hats in the television anchor seat. You'd think that people like that would be contrite, maybe a little humbled, after the Mueller report came out and proved two years of hyperventilation wrong.

But no. They're more obsessed with Russia than they have ever been. Watch poor mouth-breathing Chuck Todd go full Joe McCarthy on Sunday.

Kennedy: The fact that Russia was so aggressive does not exclude the fact that President Poroshenko actively worked for Secretary Clinton. Now, if I'm wrong, and if all these journalists --

Todd: Actively worked for secretary -- I mean, my goodness, wait a minute, Senator Kennedy, you now have a president of Ukraine saying he actively worked for the democratic nominee for president. I mean, now come on. I mean, I got to put up -- you realize the only other person selling this argument outside the United States is this man, Vladimir Putin.

You'd think they'd have more self-awareness than to say things like that out loud, given American history. But of course, they never do. Not only are these people unwise and hysterical, totally political, utterly dishonest, but also kind of dumb. And because shifting mental gears is hard for dumb people, it turns out the entire on-air staff over at MSNBC is still pretending that Russia collusion is the most important story there is. It's like Robert Mueller never delivered his report.

Joy Reid, MSNBC host: Is it possible that Donald Trump now takes his beliefs in the world from the president of Russia?

Naveed Jamali, author: He's acting as a Russian asset. I mean, he's amplifying talking points put together by the Kremlin.

Glenn Kirschner, MSNBC legal analyst and former federal prosecutor: I can't come up with a plausible explanation for all of these elected officials seeming to want to just turn our government over to Vladimir Putin.

Reid: This time the enemy is Russia, which seems to have consumed one of America's great political parties whole.

Malcolm Nance, MSNBC analyst: The Constitution is a piece of paper that they would rather rip up or cut into segments rather than defend this country at all costs. The Russians set this whole thing up.

Russia is not America's main enemy, obviously. No sane person thinks it is. Our main enemy, of course, is China, and the United States ought to be in a relationship with Russia aligned against China to the extent that we can.

Reid: We've left the good guys and have joined the bad guys in the world, and Republicans writ large seem to be OK with it.

Sarah Kendzior, journalist: Now we are left with, as I've said before, a transnational crime syndicate, masses of government led by a Kremlin asset.

Nance: Donald Trump believes the words -- believes it in his heart -- the words of a communist, an ex-communist dictator, KBG officer rather than any person in America. We're in danger.

"We are in danger," says Malcolm Nance.

This is really irresponsible. Keep in mind that everything we just played for you aired in the past two weeks.

If you excluded debunked conspiracy theories, could any of these people actually tell you why Vladimir Putin is so bad? Why is he so bad? He's bad, Chuck Todd says. OK. Speak slowly so I can understand.

What makes Vladimir Putin worse than, I don't know, a whole long list of American allies? Let's try the king of Saudi Arabia, for example, or the people who run the Emirates, the people on whose payroll so many in Washington are right now. Why is he worse than them?

They couldn't answer that.

For Chuck Todd and the rest of the dummies, Vladimir Putin isn't a real person with actual ideas and priorities and a country and beliefs. No. He stopped being that long ago. He's a metaphor, a living metaphor. He's the Boogeyman. Step out of line, and you're a traitor in a league with Vladimir Putin. Let's put his picture on the screen. Can we get his picture on the screen?

The irony, of course, is that Putin, for all his faults, does not hate America as much as many of these people do. They really dislike our country, and they call other people traitors because they're mouthing the talking points of Putin. These are people that don't know anything about Russia, who don't speak Russian, who couldn't identify three cities in Russia. The rest of the world isn't quite that dumb. Dumb as it may be, not quite that dumb.

The French president, Emmanuel Macron, for example. In the past month, Macron has called NATO "brain dead" because NATO exists to provide the common defense, and yet it has, with the fall of the Soviet Union in 1991, no clear enemy. Europe and the United States, Macron has said, should have closer relationships with Russia, not more hostile ones.

So, does that make Macron a stooge of Putin? Is he a puppet of Moscow? Or could he just be a rational leader, the kind that we don't have, looking out for his country's interests?

Russia is not America's main enemy, obviously. No sane person thinks it is. Our main enemy, of course, is China, and the United States ought to be in a relationship with Russia aligned against China, to the extent that we can.

China is the country that is currently right now murdering tens of thousands of Americans every year with fentanyl. It's depopulating parts of the country. It's pushing our life expectancy down. That's how profound a threat this is. It's coming from China and our elites barely care. They won't even acknowledge it. 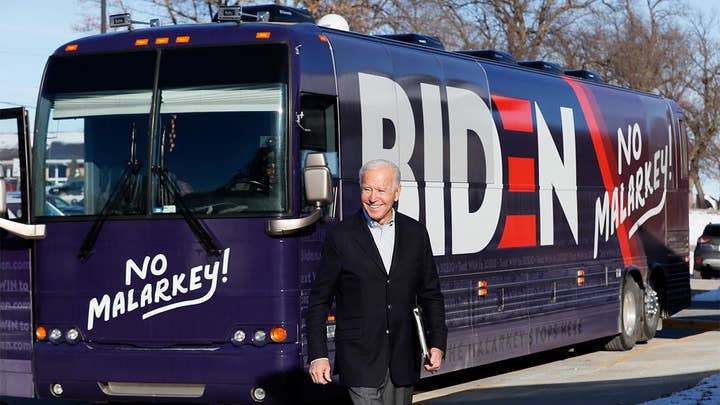 In fact, many of our politicians run interference for the communist government of China instead. In California, politicians boycott other U.S. states for their moral transgressions and then fly to China to praise this dictatorship. Michael Bloomberg doesn't even do that. He denies that China is a dictatorship at all.

Margaret Hoover, host of PBS' "The Firing Line": And they're still burning coal.

Bloomberg: Yes, they are. But they are now moving plants away from the cities. They -- the Communist Party wants to stay in power in China and they listen to the public. When the public says I can't breathe the air, Xi Jinping is not a dictator. He has to satisfy his constituents or he's not going to survive.

Hoover: He's not a dictator?

Bloomberg: No. He has a constituency to answer to.

And yet no one's even noticed. Bloomberg's comments have gotten not 1 percent of the reaction that anything Russia-related gets. The press isn't racing to call Bloomberg a traitor, though that tape makes you wonder. Why? Because most of Washington is already in the tank for China.

During the days of the Chinese emperors the imperial government was supported by thousands of eunuchs. The emperors are gone, but the eunuchs clearly remain, in case you haven't noticed.