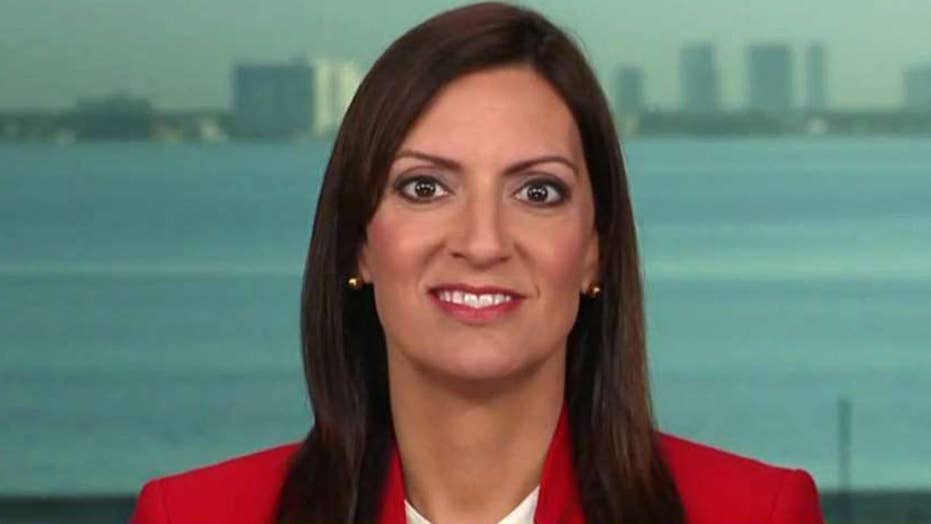 Latino elected officials, business leaders and community advocates unite in the crucial swing state in support of the president's agenda.

Hispanic Americans make up a growing share of the U.S. electorate. In fact, a record 29 million Latinos were eligible to vote in the 2018 midterm elections, accounting for 12.8 percent of all eligible voters, a new high.

However, the misconception is that politically, Latino is often synonymous with the Democratic Party, but, that parallel is undergoing quite a transformation.

Too often, the Hispanic voting bloc is being fed the idea that Democratic ideals are in line with that of our community. However, the left has become a purveyor of extreme socialist ideologies that are frankly out-of-touch with everyday Latinos.

TRUMP CAMPAIGN AIMS TO USE IMMIGRATION, TRADE TO WIN HISPANIC VOTE IN 2020

Politicians, pollsters and pundits need to remember that Latinos are not single-issue voters. The priorities we care about reflect the priorities of Americans from all walks of life. This fabricated narrative that Hispanics only care about immigration and are avid supporters of illegal immigration is absurd.

Truthfully, it is disrespectful to assume Latinos are not proud, informed Americans seeking the same things as the rest of the electorate — economic opportunity, freedom, strong national security, effective education and affordable health care.

Pandering to our voting bloc without substance will not win the Hispanic vote. Why? Because Latinos are people of action. We expect our leaders to talk the talk and walk the walk, not feed us empty rhetoric that consistently falls flat.

In 2016, a bold, "non-political" businessman launched his campaign for president. At that time, media elites cautioned that candidate Donald J. Trump would push conservative-leaning Hispanics to flee the Republican Party with anti-immigrant prose. Nonetheless, Trump captured 29 percent of the Latino vote because this voting bloc was ready to turn the page on record unemployment, joblessness and a lackluster approach to national security.

Three years later, promises made have been promises kept.

Our nation has grown by leaps and bounds thanks to policies propelled by President Trump. And contrary to what the left is dishing out, this president’s commitment to Hispanic Americans is evident by the outcomes we have obtained, including the lowest recorded unemployment rate in history (4.2 percent as of September), consistent job growth, and rising homeownership.

Pandering to our voting bloc without substance will not win the Hispanic vote. Why? Because Latinos are people of action. We expect our leaders to talk the talk and walk the walk, not feed us empty rhetoric that consistently falls flat.

In fact, The New York Times recently reported, "Hispanic women have emerged as the biggest job market winners in an economy that has now grown for 121 straight months. ... Employment rates for Hispanic women between the ages of 25 and 54 have jumped by 2.2 percentage points since mid-2007, the eve of the Great Recession. That’s the most of any prime-age working group."

This is bonafide action, not sound bites or spin. What is even more exciting is that this administration’s accomplishments are not just on the economic front.

In education, American students have a true champion in Trump. With efforts such as $1 billion for states yearly to fund vocational and career education programs, apprenticeship programs, a renewed call for interest in the STEM fields, and executive orders promoting training and job development in cybersecurity and artificial intelligence, the future of our nation’s Hispanic Americans is brighter than ever.

President Trump has demonstrated his willingness to fight for democracy. His courage in standing up to tyrants, dictators and despots in countries like Venezuela, Cuba and Nicaragua shows his commitment to human rights across our hemisphere.

Affordable and effective health care is another top voting issue for Latinos, who have seen cost reductions since Trump’s election. By fixing the broken health care system left behind by President Obama, eliminating the individual mandate penalty on hard-working Americans, and championing lower prices for prescription drugs, Americans are seeing real and meaningful improvements over their health care coverage.

Furthermore, President Trump has demonstrated his willingness to fight for democracy. His courage in standing up to tyrants, dictators and despots in countries like Venezuela, Cuba and Nicaragua shows his commitment to human rights across our hemisphere.

Why? Because we are all affected by immigration or know someone impacted by it. Many will question: do Latinos truly care about their heritage, if they support only legal immigration? We undeniably care about our heritage, traditions and culture, but we also recognize that as Americans we must respect the rule of law.

Hispanics throughout our country expect our congressional leaders to address challenges with the current, legal system. They also understand the importance of national security, border wall funding, and negotiations with Mexico and Guatemala in order to stem the tide of illegal immigration — all priorities of the current administration.

And although the left’s ignorant assessment of Latino voters for the upcoming election is inaccurate, it serves as fuel. Fuel for the millions of Hispanic American voters fed up with the status quo. Fuel for minorities that for far too long have been pigeonholed and only courted on election years. And fuel for voters who are experiencing a renewed sense of prosperity, ignited by an administration that fosters the preservation of the American Dream for all Americans.

Jeanette Nuñez is the first Hispanic woman Lieutenant Governor of the State of Florida, and a former Representative of the Florida House. She serves on the Statewide Human Trafficking Council and is a member of the South Florida Human Trafficking Task Force for Super Bowl LIV.