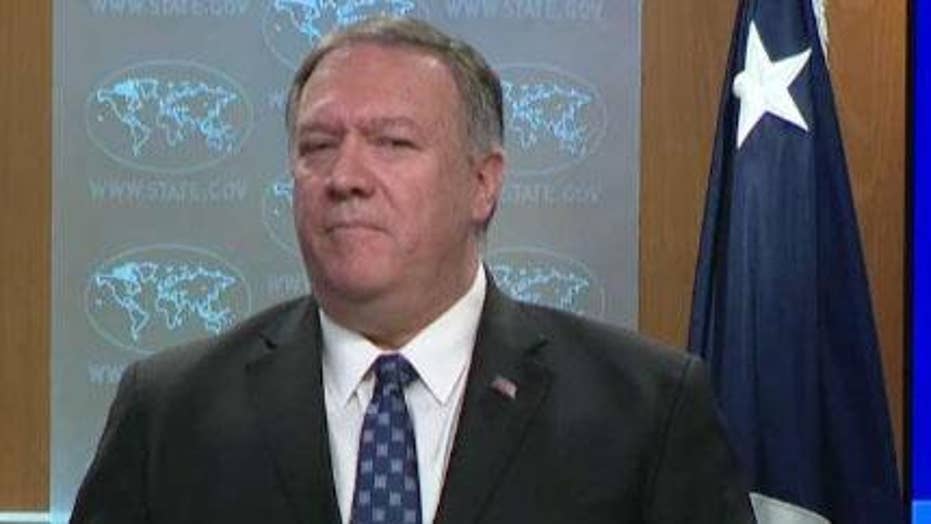 Mike Pompeo: No nukes for Iran on our watch

"Iran was on a pathway to acquiring a nuclear weapon provided by the nuclear deal," said Mike Pompeo, discussing U.S. strategy to prevent Iran from obtaining a nuke

Secretary of State Mike Pompeo gave new insight on Tuesday morning on what’s been sorely missing in the US-Iran confrontation: the US strategy.

“We put Iran in a place it’s never been before,” Pompeo said.

The Obama administration chose to underwrite and appease. “We chose to confront and contain,” Pompeo said. What a contrast.

Confront and contain. Seen in this light, the strike on Soleimani marks a new tactical step. Both the strike and the recent military deployments fit a much bigger, active U.S. strategy. That strategy is now using military forces to put the lid on Iran’s terror “Axis of Resistance” across the Middle East and to counter Iran’s escalations.

The goal is to box in Iran. Striking Soleimani was a huge part of this move. Iran had trained between 75,000 and 145,000 Iraqi paramilitary forces for Soleimani to use at will. Removing Soleimani’s leadership sets back those plans.

Pompeo’s remarks Tuesday further indicated the U.S. is willing to constrain Iran in other ways.

“Iran will not get a nuclear weapon,” Pompeo pledged.

The goal is to box in Iran. Striking Soleimani was a huge part of this move. Iran had trained between 75,000 and 145,000 Iraqi paramilitary forces for Soleimani to use at will. Removing Soleimani’s leadership sets back those plans.

The U.S. prepared over the summer by assisting allies – and frequent Iranian targets – like Saudi Arabia and the UAE in building up defenses, specifically, air defenses against missile attack.

Pompeo also revealed that economic pressure is working. Iran has a bad budget shortfall and is struggling to figure out how to make it through 2020, according to Pompeo.

The U.S. pull-out in Afghanistan is at stake, too.  Pompeo said Iran today is “actively working to undermine the peace process,” a big deal given Iran’s support to the Taliban and other insurgent groups, which is run via Iran’s 572-mile border with Afghanistan.

First was the propaganda statement from Iran’s foreign minister Javid Zarif, who said Soleimani was on a “diplomatic mission” to Baghdad.

“Anybody believe that?” Pompeo asked the press incredulously.

Second was the issue of lawful targeting and Trump’s remark about cultural sites.  Pompeo, Secretary of Defense Mark Esper and Chairman of the Joint Chiefs of Staff Gen. Mark Milley have closed ranks, stating that all targets considered for strikes by U.S. military forces will be lawful. Every target is painstakingly reviewed for civilian collateral damage and weapons effects.

But the media just can’t leave it alone. NBC’s Andrea Mitchell wanted to talk war crimes on Tuesday when she asked the secretary a question.

What Pompeo knows is that Middle East bad guys often park military missile launchers next to schools, art museums, mosques, you name it. Iraq did it all the time. Iran may try to position military forces next to a cultural site and then fire at the US or allies.

“Every action we take will be consistent with the international rule of law,” said Pompeo.

He pushed back on the idea the U.S. would seek to damage Persian culture. It’s Iran who denies religious freedom to its citizens.

“Let me tell you who’s doing damage to the Persian culture. It’s not the U.S. It’s the Ayatollah.”

Good answer. The U.S. has a strong strategy and America is doing the right thing to confront and constrain Iran. It will save American lives – and it may help lead to what Pompeo wants: Iran behaving as “a normal nation.”

Pompeo calmly showed Tuesday that Iran won’t get in the way of State’s agenda. The secretary extended his condolences to Australia, mentioned Hong Kong, congratulated President Juan Guaido’s re-election in Venezuela, noted the upcoming EU meetings on Iran and commended Bahrain for their concerns about China’s treatment of Uighurs.

Pompeo’s body language was “we’ve got this” and his opening remarks were a good reminder of the deep friendships America enjoys with nations around the world. That should give Iran pause, too.