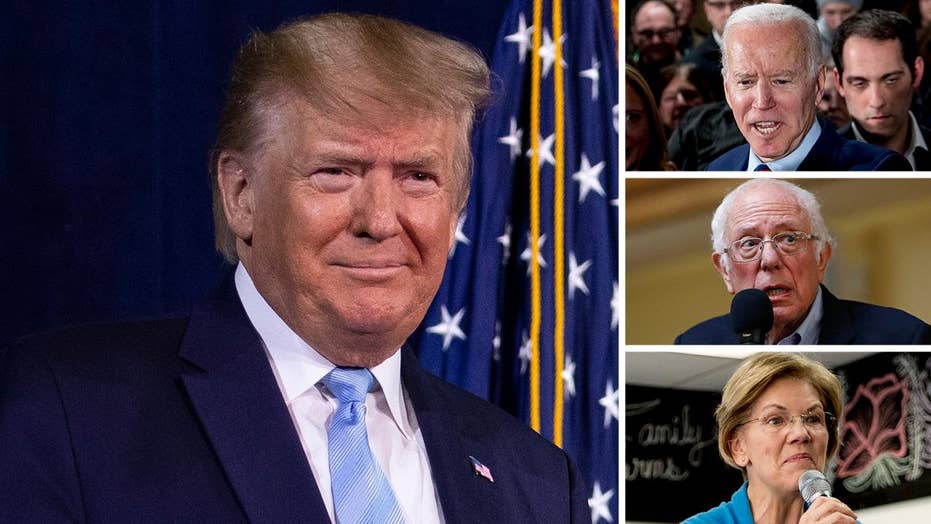 Peter Doocy reports from the campaign trial in Iowa on what the president's rivals are saying about his foreign policy.

Being a conservative in perhaps the most liberal state in the country, Massachusetts, I'm often asked why I support the president by those on the left, some of whom think he's a racist, misogynist, homophobe, criminal and, for good measure, a bully.

I laugh and say, "It's because none of those things are true!" and then hit them with facts, not #FakeNews.

Let's start with the absurd allegation that President Donald Trump is anti-women. "If that were true," I ask, "why has he created millions of jobs for women?" Under the Trump administration, the unemployment rate for women is 3.5%, the lowest in 66 years. Hence the poverty rate for women has fallen to record lows. In September 2019, the U.S. Census Bureau reported, "While both the poverty rate and the number of people in poverty fell for many demographic groups between 2017 and 2018, a large proportion of the decline can be attributed to female-householder families with no spouse present."

Why is this so vitally important? It's because financial independence truly empowers and liberates women, giving them the freedom to chart their own course on their own terms, beholden to no one.

Isn't that the definition of feminism?

This means millions of women employed in the roaring Trump economy fueled by capitalist, free-market principles aren't dependent on "the Man," aka the government, reliant on that next welfare check, nor are they dependent on a man in the traditional sense. One of the many benefits? Women in bad jobs or bad relationships have the power to change direction without the paralyzing fear or financial worry they won't be able to pay the rent or afford life's other necessities.

If you think this isn't a game-changer, ask any woman who's ever been trapped in a dead-end job or an abusive relationship. She'll set you straight.

Last month, the president signed into law up to 12 weeks of paid parental leave for federal civilian employees, which will go into effect this year. Undoubtedly, this most benefits women, who disproportionally care for children. It's also a stepping stone toward the president's broader goal of implementing paid family leave for all Americans, which will benefit women across the nation by not penalizing them financially for caring for their families.

Since Trump took office, nearly 7 million Americans have been lifted off food stamps, which means millions of women have transitioned from poverty and government dependence to a career and self-reliance.

If that isn't female empowerment, what is?

My liberal friends will then pivot and say, "But Democratic lawmakers and cable news 'experts' say he's a racist!" To which I counter that thanks to the president's leadership with the economy, the black unemployment rate is also at a historic low.

The president has delivered on criminal justice reform, giving thousands of those wrongfully incarcerated a second chance at life while also implementing a number of initiatives that support the nation's historically black colleges and universities, or HBCUs.

In fact, just last month, the president signed legislation that will permanently provide $255 million annually to HBCUs and dozens of other institutions that predominantly serve minority students. He also signed an executive order in 2018 that established the White House Opportunity and Revitalization Council to improve revitalization initiatives that target economically distressed areas including so-called opportunity zones.

Now, would a racist be uplifting minorities and empowering them with enhanced housing and education opportunities, block grants, access to small-business loans, jobs, higher wages and tax breaks while also rebuilding their communities?

And when it comes to allegations of homophobia, the Trump administration last year launched a global crusade alongside LGBTQ groups and human rights organizations to decriminalize homosexuality around the world. Leading the charge? Richard Grenell, the openly gay U.S. ambassador to Germany the president appointed.

When I hear, "Trump's a criminal," from some on the far left, I remind them that in America everyone is innocent until proven guilty by a jury of their peers. Since the president has occupied the Oval Office, he's been subjected to a daily deluge of investigations including a 22-month special counsel probe that found "insufficient evidence" of criminal mischief.

Undoubtedly, if any of these partisan investigations had found a scintilla of evidence of criminal wrongdoing, he would've been charged long ago.

Grasping for straws at this point, some of my Democratic friends will say, "OK, I guess you're right, but he's still a bully." To which I respond that if you were to have the entire Washington establishment against you and the #FakeNewsMedia accusing you of treason and other accusations that are heinous, false, defamatory -- and hurtful -- wouldn't you fight back, too?

That's usually where the debate swiftly ends and they change the subject.

Bottom line: Plain and simple facts, not blind hatred fed by #FakeNewsMedia, should be one's guiding light leading into the next election.