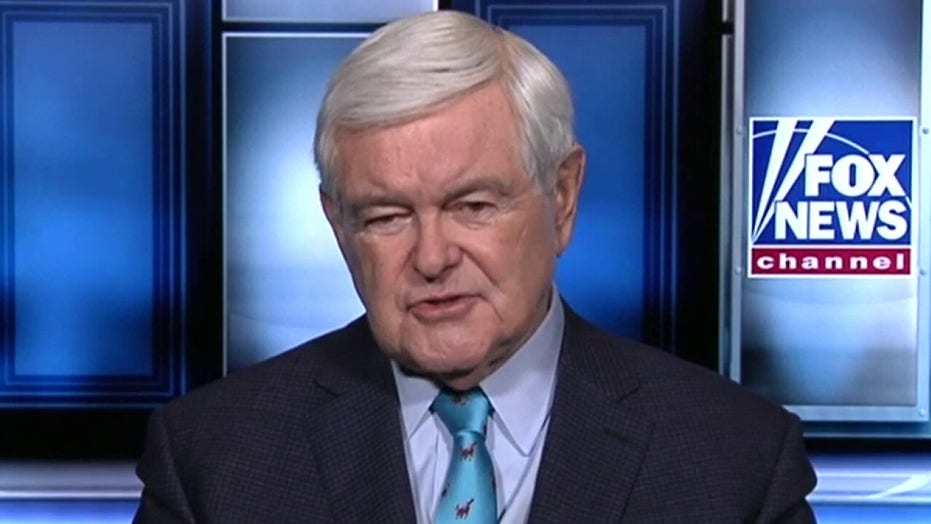 Newt Gingrich: My advice to the president is: focus on the American people, don’t pay attention to Pelosi

We know what President Trump did. What would you do?

Consider the situation in which President Trump finds himself.

TAMMY BRUCE: DEMOCRATS SHOW US WHAT A COMPLETE MELTDOWN LOOKS LIKE

The bitter Democratic hostility was made clear when Speaker Pelosi refused to introduce President Trump with the historic “It is my high privilege and distinct honor” phrase and instead simply said “the President of the United States.”

The president was delivering a message as a Constitutional duty which calls for an annual report on the State of the Union. She was honoring the office of the president not the personality of Donald Trump. She failed.

President Trump won the 2016 election and thought he would be accepted as president. Instead, from the day after the election, he was hounded, derided and attacked by a combination of so-called never-Trumpers, Democrats and the leftwing media.

Then, to make sure we all understood the depth of her contempt and hostility toward President Trump, Speaker Pelosi publicly tore up her copy of his speech while she was still at the podium. Ironically, Pelosi’s petty bitterness was being drowned by the extraordinary speech the president had delivered.

The State of the Union drew support from 76 percent of the audience according to a CNN poll following the speech. Think of that. When even CNN must report three out of four Americans who watched the speech liked President Trump’s State of the Union, something pretty big is happening. Similarly, a CBS poll found that 75 percent of watchers approved.

The State of the Union was actually a remarkably well-developed presentation that had human touches (a young girl who survived being born prematurely, a Tuskegee airmen, a soldier surprising his family with his return from Afghanistan, a young girl getting a scholarship to go to a better school, Rush Limbaugh with stage four lung cancer receiving the Presidential Medal of Freedom from First Lady Melania Trump – the list goes on and on).

The closing offered a positive vision of America’s future and had such emotional power that people I know had tears in their eyes listening to it.

This was the speech House Democrats decided to scorn and dismiss.

However, the president went well beyond the bounds of a normal prayer breakfast speech in hitting at Speaker Pelosi – who was sitting four seats away from him.

Trump specifically cited (without mentioning her name) her statement that she prayed for him – and he said he simply did not believe it.

I tend to agree with President Trump. Someone who deliberately refuses to use the words “honor” and “privilege” in an introduction and then ostentatiously tears up the biggest speech of the year is probably not much into praying for the person to whom she is so publicly contemptuous.

Thursday, the president had a victory celebration over his acquittal by the Senate the day before. He gleefully held up a copy of The Washington Post with the headline “Trump Acquitted.”

President Trump had every reason to feel celebratory.

Over the last three years, he has withstood vicious partisan reporting. He’s dealt with illegal efforts by the leaders of the FBI to destroy him. He endured a long investigation by Robert Mueller and a team of left-wing investigators.

He sustained smears by people on his own national security staff. He faced a totally one-sided Democratic witch hunt in the House (which broke all the rules of fairness and bipartisanship).

He had to watch personal friends be harassed – and in some cases brought near bankruptcy – by absurd legal expenses.

Finally, he has seen his own family being unfairly attacked and ridiculed.

The question I have for you is: In this circumstance, what would you do?

President Trump won the 2016 election and thought he would be accepted as president. Instead, from the day after the election, he was hounded, derided and attacked by a combination of so-called never-Trumpers, Democrats, and the leftwing media.

Then, President Trump thought that if he endured two years of an absurdly aggressive and confrontational Mueller Investigation (which included putting people in solitary confinement for months and threatening to bankrupt the president’s friends) then people would accept that he was innocent.

After a few weeks of starting to relax, suddenly there was an anonymous so-called whistleblower (who to this day is still absurdly secret even though he started the entire impeachment process). Now the topic moved from Russia to Ukraine.

But Ukraine could only be discussed where it involved President Trump. In the height of one-sided news media coverage, Vice President Joe Biden’s (recorded and well-documented) boasting that he had threatened to withhold $1 billion in foreign aid unless Ukraine fired a prosecutor investigating a company which was paying his son $50,000 a month was off-limits.

After watching Schiff fabricate Trump comments that he admitted were pure fiction – and watching the House Democrats set up totally one-sided, partisan rules for impeachment hearings (counter to the Richard Nixon and Clinton impeachment precedents) – the president knew he would have to endure weeks of lies and smears knowing that in the end the Republicans in the Senate would acquit him.

However, the night before the acquittal, Speaker Pelosi behaved in such a bitter, vicious manner that it is clear the Democrats are going to continue to harass President Trump regardless of facts – or the will of the American people.

Given all of this, before you judge the president’s strong language, ask yourself this: If you had endured more than three years of constant attack, how would you respond? What words would you use?

When people think that through, I think some will be a lot more sympathetic to the president than they had been.