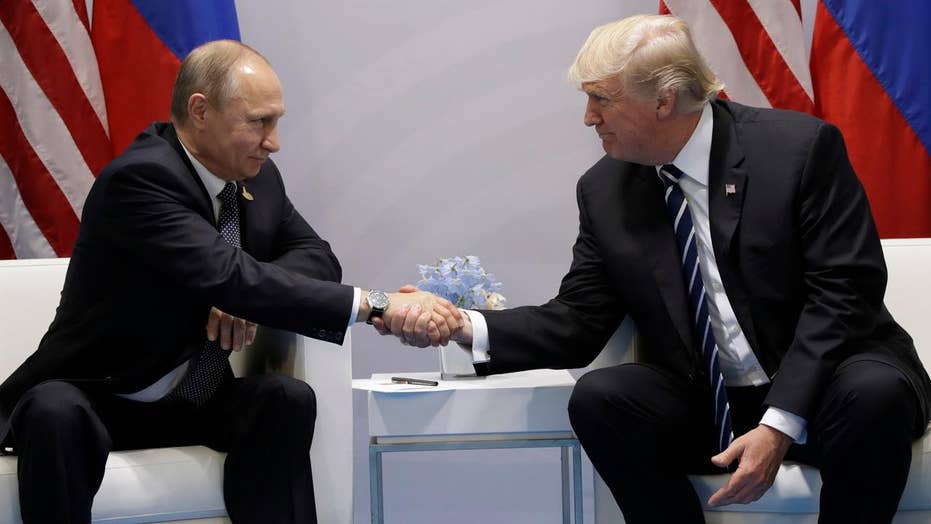 Presidents address press ahead of meeting

Foreign policy experts all over Washington seem completely stupefied when it comes to understanding President Trump’s national security goals. And for a long time, I was one of them.

In happy hours all over town where we love to gather, some experts would describe Trump’s approach as “uneducated,”“unsophisticated” or even “unprofessional.”

Rubbish. They just can’t get over the fact that he doesn’t share their often overly polished and overly sophisticated perspectives. I should know, it's my profession.

The simple fact is this: you don’t need a Ph.D. from Yale or Cambridge to understand Trump’s vision for America’s place in the world—you just need to take the time to study his background.

He doesn’t care about your foreign policy schools of thoughts, deep historical perspective or game-theory workshops. He just wants the best “deals” for America. Period. End of story.

Washington’s foreign policy brain trust would be wise to take heed the words of a 900-year-old Jedi master named Yoda: “Unlearn what you have learned”.

Understanding the Trump Doctrine is child’s play—just don’t overthink it.

Put away your Hans Morgenthau, Kenneth Waltz or just war theory training because President Trump has his own ideas when it comes to global affairs.

Our new president is very different than almost any other we can remember in modern times.

He does not have the professorial pontification skills or deeply intellectual mindset of Barack Obama. Nor does he have the government experience of George W. Bush, Bill Clinton, George H.W. Bush, Ronald Reagan, Jimmy Carter, Gerald R. Ford, Richard Nixon, Lyndon Johnson or JFK.

Trump is cut from a different cloth—he’s a street fighter and certainly not a slick, ivy league educated foreign policy expert.

The Donald is a rough and tumble, school of hard knocks, New York City businessman. He doesn’t care about your foreign policy schools of thoughts, deep historical perspective or game-theory workshops. He just wants the best “deals” for America. Period. End of story.

All of this is exactly what the American people voted for. Something different—with the old models of thinking being clearly rejected. And we need to make our peace with it.

But that doesn’t mean he isn’t sophisticated or doesn’t have a sense of vision when it comes to international affairs.

In fact, Trump has his own loosely crafted foreign policy playbook, based on his own success and failures as a New York City businessman, entrepreneur and branding genius.

Our new president is taking his business acumen and applying it on a global stage. He has, at least in my opinion, what can be best described as a foreign policy balance sheet in his head. Trump looks at where he thinks America is “winning,” code for where Washington’s interests are moving forward, and losing, where America’s interests are not being served. And he tackles the ‘losses’ on that balance sheet with ruthless efficiency.

And that all makes Trump’s global agenda, one in which he takes on the toughest of problems—problems that have been festering for decades—a very hard task, but one that is worth pursuing.

Taking on China over North Korea will be an immense challenge—creating tensions in a relationship with the two biggest global economies and militaries. Taking on trade deals that many times were not always in America’s best interests might be even harder. Asking our allies to spend more towards our common defense won’t be easy. But who said change ever was?

Making all of this even more difficult is when people misinterpret the president's own words or cherry pick his ideas to change his message, all in an effort to take him down.

Will Trump abandon NATO, leave South Korea on its own to confront a nuclear North Korea and withdraw to some sort of fortress America? Never.

Again, his past clues you into his thinking. Like any CEO, our president is using his background in business to strike the best terms for the nation in its relationships. And just like any CEO, he is not going to break a signed deal, like alliances with key partners the world over - that’s bad for the business of the nation. But he will try to ask for a little more—just like many of us do in our own lives and business deals. Shocker.

What unnerves people is the patented Trump approach—blunt and straightforward—and almost never politically correct in how he sometimes goes about striking a deal. That will get smoothed out in the months and years to come, just like many other presidents in the past. The stature of the office, the highest in the land, has that impact on the occupant.

But Trump is not going to change his core thinking or personality—that much is clear.

World leaders at the G-20 should already understand by now who our president is and his approach.

Trump is not going to coddle you, make you feel all warm and fuzzy when you do something against America’s national interests—he is not Barack Obama. He’s going to tell you in his own Trumpian way he is not impressed—and press you to change your position. And he might even do it on Twitter. And the media will go crazy over it, only amplifying the power of his message.

In fact, there might be a foreign policy vision that personifies the Trump Doctrine after all: mega-realism on steroids—and it's what the American people asked for. Trump has stayed true to what he said he would do in foreign affairs, and it's simple to understand, you just have to see the world through his own training and life experience—not yours.

Let Yoda be your guide.