The president's decision to threaten tariffs on Mexico got concrete results.

Last week we saw proof that tariffs work. President Trump threatened tariffs on Mexico. Their leaders came to negoitiate, and we got concrete results.

Even the Wall Street Journal, whose generally indispensable and brilliant editorial pages regularly rail against tariffs, recognized the president's achievement, writing the following:

"In the course of a week, Mr. Trump managed to get Mexico to agree to two things that months ago would have seemed unlikely: Militarizing Mexico’s crackdown on migrants by deploying National Guard troops and expanding the ‘remain in Mexico’ plan for asylum seekers."

The anatomy of this latest tariff dispute tells us a lot about policy, our politics and government. We should learn the lessons. Everyone agrees we have a crisis at the southern border. Two weeks ago, 1,000 illegal immigrants literally just walked into the country, in El Paso, Texas. Our immigration system is not just broken; for all practical purposes, it doesn't exist.

But there is one person, it seems, who is actually trying to fix it: President Trump. That's why he resorted to his tariff threat. It was a new approach, so of course, the establishment lost their minds. And the Republican establishment hated it, too.

The response was knee-jerk, ideological … dogmatic. So here's the first lesson: The establishment politicians and media should be more open-minded. Give new ideas and new approaches a chance.

Instead, the way they were talking, tariffs on Mexico would be the end of our economy. They let ideology get in the way of the facts. Even though Mexico is our biggest trading partner, it's still a tiny part of our economy. Imports from Mexico make up just 1.8 percent of our economy. And exports to Mexico are only 1.4 percent.

It's like the critics didn't even look at it as a practical policy question. For them it was an article of faith -- tariffs are bad. It was the same thing with all the nodding dogs on TV, spouting the same line about American consumers. “Tariffs are a tax.” “It will overwhelm the consumer.”

But hang on a second. President Trump has been introducing tariffs for over two years now, going back to April 2017 when tariffs on lumber imports from Canada went up to 24 percent. We've had tariffs on China and Canada on products, ranging from steel and aluminum to toothbrushes and washing machines.

Companies don't just sit there and take it when tariffs are imposed, they respond. One person at least seems to get this:
“The people aren't going to have to worry about paying the tax because the companies are going to move back into the United States. There won't be any tariff,” Trump said.

He's right. Companies are moving away from countries hit by the Trump tariffs. Especially China – and in a big way. A recent survey by Bain & Company showed that 25 percent of corporate executives who do business in China will be redirecting their investments out of the area, and 42 percent of them are expecting to source their raw materials from someplace else.

Some of the companies leaving China include Varex Imaging, Universal Electronics, and GoPro. And the CEO of ControlTek, a company that used to have a lot of business in China, recently said, “We'll design China out."

Just think about that for a moment. There is a massive policy lesson here. For decades the establishment looked on impotently as American manufacturing went to China. President trump comes in, imposes tariffs, and you see an immediate private sector response: “We'll design China out."

Trump's tariffs, derided by the snooty know-alls in the establishment, are turning out to be the most consequential - and positive - economic policy mechanism we've seen in decades. And it's not just companies moving out of China. We're seeing them move back to America, just as the president said. Toy giant Hasbro is the latest example.

Another thing establishment geniuses say is you shouldn't muddle up trade policy with immigration policy. Sen. Chuck Grassley said, “Trade policy and border security are separate issues. This is a misuse of presidential tariff authority and counter to congressional intent."

Another Republican, Sen. James Lankford, was reported as saying that the administration "is trying to use tariffs to solve every problem but HIV and climate change."

But why not? As Deng Xiaoping said, “Who cares if the cat is black or white as long as it catches mice?” And as we've seen with the Mexico tariffs, it did. Very quickly. 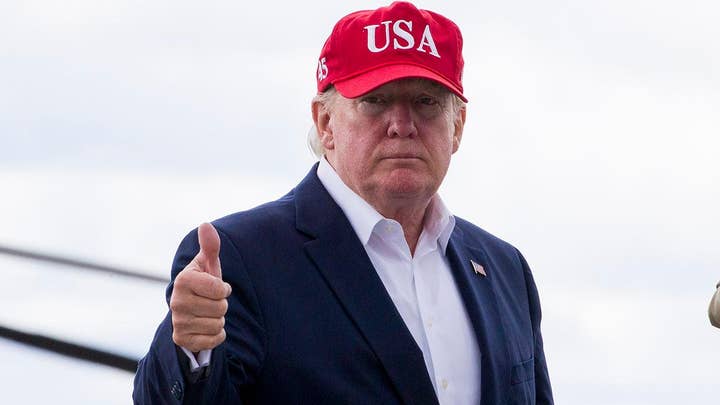 President Trump's use of tariffs is an example of creative, entrepreneurial and above all, successful policy making. This was the whole point of Trump -- to do things differently. To stand up to all the useless bureaucrats and naysayers bogged down in the status quo.

I can imagine the meetings on this that the president has had the last few months. I've been in those policy meetings. Oh, you can't do that, Mr. President, you'll upset the Chinese. They hate losing face. Oh, Mr. President, if you do that we'll get pushback. Let's just give the officials a bit more time to work something out, Mr. President.

Talk about Nervous Nancy Pelosi. The entire government machine is stuffed full of Nervous Nancys. Usually, the politicians give in. I've seen it, over and over again. That's why nothing happens.

But Trump is different. Imagine him in those meetings. I've had enough of all your negative crap. I want action. I want accountability. I want results. Yes! That's what Americans voted for.

The establishment idiots who condemn him for it care about style, not substance. As long as you behave the right way, say the right things, do it the way it's always been done, they think you're great, regardless of your actual results. That's why they all loved Obama. He went along with it. He behaved the way the establishment expects.

Trump doesn't. That doesn't make him bad; it makes him good. It's the status quo that's bad. The establishment is obsessed with Trump and his tweets, but he's obsessed with you and your life.

The final big lesson of this week is, of course, what's not happening. The president shouldn't be having to pressure Mexico the way he did. It should be our own government, not a foreign government, that fixes our immigration crisis.

President Trump's use of tariffs is an example of creative, entrepreneurial and above all, successful policy making. This was the whole point of Trump -- to do things differently. To stand up to all the useless bureaucrats and naysayers bogged down in the status quo.

And here we turn to the Democrats. Isn't it sickening to see them on their high horse about the moral stain of Trump's border policy? Nancy Pelosi has said, “A wall is an immorality. It's not who we are as a nation.”

Not who we are? Well, who are you then, Nancy? You're actually the one standing in the way of the changes that would help prevent the exact things you complain about.

Let border officials detain families for over 20 days. Let children claim asylum in their home country and then be reunited with their families if they're already here. Change the asylum threshold from a credible fear to the likelihood of actually getting asylum. None of this even has anything to do with the wall that you say you hate - though of course, we need that, too.

The Democrats are blocking common-sense immigration reform purely to score political points. It's you, Nancy Pelosi, who's exploiting desperate migrants for political gain. The young girls assaulted on their dangerous journey. The families that are separated because of our broken system.

It's on you, Nancy, not the evil Trump, but you. You are the person who is actually standing in the way of solving this problem.

Adapted from Steve Hilton's monologue from "The Next Reviolution" on June 9, 2019.