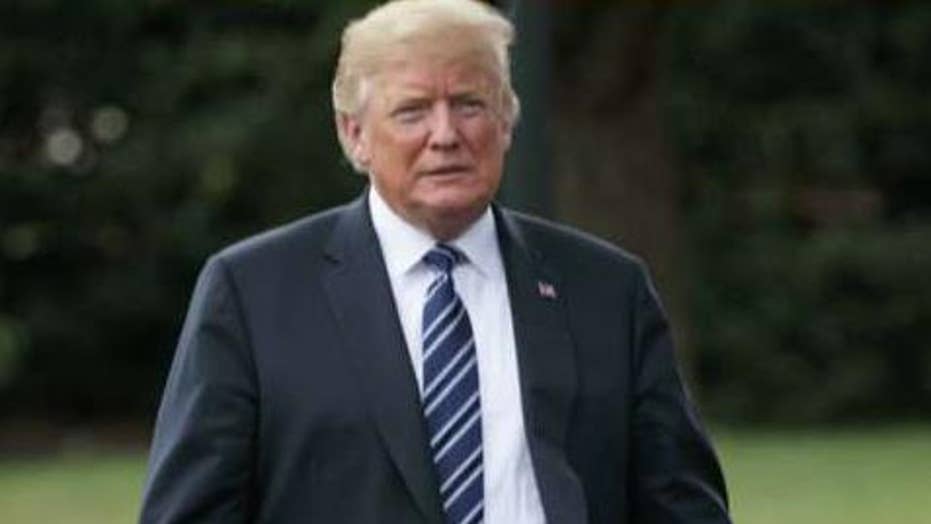 Trump strikes deal with Mexico after threat of tariff hike

National Border Patrol Council President Brandon Judd says President Trump had to threaten tariffs to force Mexico to step up and publicly agree to the deal.

Even as he again hailed his administration's last-minute, much-heralded deal on Friday with Mexico as a "successful agreement" to address illegal immigration at the southern border, President Trump on Sunday bluntly suggested he might again seek to impose punishing tariffs on Mexico if its cooperation falls short in the future.

The president and other key administration officials also sharply disputed a New York Times report claiming the Friday deal "largely" had been negotiated months ago, and hinted that not all major details of the new arrangement have yet been made public.

In its report, the Times acknowledged that Mexico's pledge to deploy up to 6,000 national guard troops to its southern border with Guatemala "was larger than their previous pledge," and that Mexico's "agreement to accelerate the Migrant Protection Protocols could help reduce what Mr. Trump calls 'catch and release' of migrants in the United States by giving the country a greater ability to make asylum-seekers wait in Mexico."

U.S. officials had been working to expand the migrant program, which already has led to the return of about 10,000 people, and said Friday's agreement was a major push in that direction. Nevertheless, the Times, citing unnamed officials from Mexico and the U.S., reported that the concessions already had been hashed out in a more limited form.

"Another false report in the Failing @nytimes," Trump wrote. "We have been trying to get some of these Border Actions for a long time, as have other administrations, but were not able to get them, or get them in full, until our signed agreement with Mexico. Additionally, and for many years Mexico was not being cooperative on the Border in things we had, or didn’t have, and now I have full confidence, especially after speaking to their President yesterday, that they will be very cooperative and want to get the job properly done."

That might have been a reference to discussions about Mexico becoming a "safe third country," which would make it harder for asylum-seekers who pass through the country to claim refuge in the U.S. The idea, which Mexico has long opposed, was discussed during negotiations, but Mexican Foreign Minister Marcelo Ebrard has said his country did not agree to it, even as Mexican diplomats said negotiations on the topic will continue.

And, acting Homeland Security Secretary Kevin McAleenan, speaking on "Fox News Sunday," insisted "all of it is new," including the agreement to dispatch around 6,000 National Guard troops — a move Mexico has described as an "acceleration."

A Mexican Army soldier near an immigration checkpoint in Tapachula, Chiapas state, Mexico, this past Saturday. (AP Photo/Marco Ugarte)

"This is the first time we've heard anything like this kind of number of law enforcement being deployed in Mexico to address migration, not just at the southern border but also on the transportation routes to the northern border and in coordinated patrols in key areas along our southwest border," he said, adding that "people can disagree with the tactics" but that "Mexico came to the table with real proposals" that he said will be effective, if implemented.

The agreement between the U.S. and Mexico headed off a 5 percent tax on all Mexican goods that Trump had threatened to impose starting Monday. The tariffs were set to rise to 15 percent on August 1, 2019, to 20 percent on September 1, 2019, and to 25 percent on October 1, 2019.

But, Trump suggested Sunday, the threat of tariffs is not completely removed.

"Importantly, some things not mentioned in [yesterday's] press release, one in particular, were agreed upon," Trump continued. "That will be announced at the appropriate time. There is now going to be great cooperation between Mexico & the USA, something that didn’t exist for decades. However, if for some unknown reason there is not, we can always go back to our previous, very profitable, position of Tariffs - But I don’t believe that will be necessary. The Failing @nytimes, & ratings challenged @CNN, will do anything possible to see our Country fail! They are truly The Enemy of the People!"

Democrats seeking to unseat President Trump in 2020, meanwhile, said the Times report was evidence that the administration merely was trying to save face, after Trump suddenly announced his plan for the tariffs less than two weeks ago, on May 30.

Bernie Sanders, for example, derided Trump on Sunday for purportedly picking unnecessary and economically costly fights with a variety of countries.

"I think what the world is tired of and what I am tired of is a president who consistently goes to war, verbal war with our allies, whether it is Mexico, whether it is Canada," Sanders said.

But, in a tense moment on CNN's "State of the Union," Sanders struggled when asked by host Dana Bash why he had called the situation at the southern border a "fake crisis" engineered by the White House.

"Immigration officials have arrested or encountered more than 144,000 migrants at the southern border in May, the highest monthly total in 13 years," Bash began. "Border facilities are dangerously overcrowded; migrants are actually standing on toilets to get space to breathe. How is that not a crisis?"

Sanders responded that the president has been "demonizing" immigrants.

Beto O'Rourke, in a separate interview, conceded only that Trump may have helped accelerate the implementation of a previously existing arrangement.

"I think the president has completely overblown what he purports to have achieved. These are agreements that Mexico had already made and, in some case, months ago," O'Rourke said on ABC News’ "This Week." "They might have accelerated the timetable, but by and large the president achieved nothing except to jeopardize the most important trading relationship that the United States of America has."

Mexican officials, meanwhile, insisted that they would remain engaged in active negotiations with the Trump administration.

"We want to continue to work with the U.S. very closely on the different challenges that we have together, and one urgent one at this moment is immigration," Mexican diplomat Martha Barcena said Sunday.

She told CBS News' "Face the Nation" that the countries' "joint declaration of principles... gives us the base for the road map that we have to follow in the incoming months on immigration and cooperation on asylum issues and development in Central America."

Barcena added that the U.S. wanted to see the number of migrants crossing the border to return to levels seen in 2018.