Hannity: US is leader and envy of the world thanks to Trump

President Donald Trump held a massive rally Thursday in western Michigan where 140,000 people wanted to get into a 15,000-seat arena. And he was touting his impressive record of accomplishments -- you know, the ones the media never talk about.

And despite facing a Russia collusion political witch hunt for over two years, the president has guided this country on the right path, with regulations and tax cuts and energy independence for the first time in 70 years --  a booming economy. Record low unemployment for African-Americans, Hispanic Americans, Asian Americans, women in the workplace and youth unemployment. The U.S. is now again the leader and the envy of the world. Why do you think so many people want to come here?

The haters were wrong. The media lied for more than two years. The Deep State, thankfully, has now been exposed. Those responsible will be held accountable.

So while we have been busy reporting the truth, what has happened in the rest of the media? They have been wading through a psychotic rage, a political war against the president. Clearly, they got almost every big story wrong. That is why poor Rachel Maddow, with her tinfoil hat conspiracy hat, lost all credibility. That is why Why CNN and NBC are now experiencing dramatic ratings declines. It's real and deserved.

And that's why the tinfoil hat conspiracy theorist, Adam Schiff, the only one left standing, is facing urgent calls to resign from the position atop the House Intel Committee. And rightly so.

Remember, it was known leaker and liar Adam Schiff -- we call him "the cowardly Schiff" on "Hannity" -- who claimed to have clear evidence of Trump-Russia collusion. He's still promising that. However, Robert Mueller's all-powerful, 22-month, $25 million probe found nothing, as did the nine-month investigation of the FBI and the House Intel and Senate Intel committee.

Schiff is in Congress, still claiming to have the smoking gun evidence that the investigations did not find. President Trump is calling out the cowardly Schiff. There has to be accountability -- the president is right.

Now, we have invited many times the cowardly Schiff on this program to present his damning evidence. He has always declined to come on the program. I also offered three hours of radio, which he has also declined. That's because he has been lying to you, the American people for political gain.

California's 28th district, you obviously could do better. Schiff should resign in disgrace.

Every single night, every single person, every member of the Deep State will be held accountable. And with the help of key lawmakers and dedicated investigators, equal justice under our law and equal application of the laws will happen. Our constitutional rights will be upheld.

But Schiff is not the only bad actor who has been utterly humiliated by this probe. Disgraced CIA-director-turned-NBC/MSNBC tinfoil hat conspiracy theory network hack John Brennan, has called the president on multiple occasions a traitor, pushing conspiracy theories as utter fact almost every day. And it turns out, yes, he was lying on an extreme level.

And we are learning something damning about John Brennan. Rand Paul tweeted that a high-level source told him that it was Brennan who insisted that the unverified, fake, Clinton-bought and paid for Steele dossier be included in the intelligence report. The senator says Brennan should be asked to now testify under oath in Congress, as soon as possible. 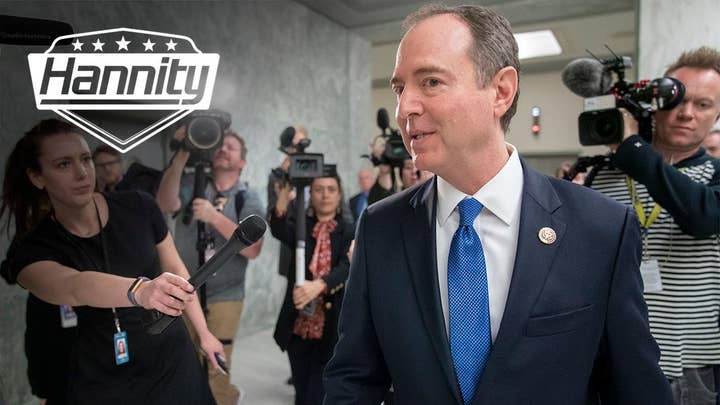 In other words, Brennan used his official position as CIA director to validate the phony Russian, Clinton-bought-and-paid-for dossier. In other words, was he involved in this hoax? Was he trying to set Trump up from the get-go? That would be a blatant abuse of power. How does he have a job at NBC? Andy Lack, phone, you might want to talk to him.

Now, this is our promise to you and we take this seriously: Every single night, every single person, every member of the Deep State will be held accountable. And with the help of key lawmakers and dedicated investigators, equal justice under our law and equal application of the laws will happen. Our constitutional rights will be upheld.

And come 2020, America's greatness will prevail.