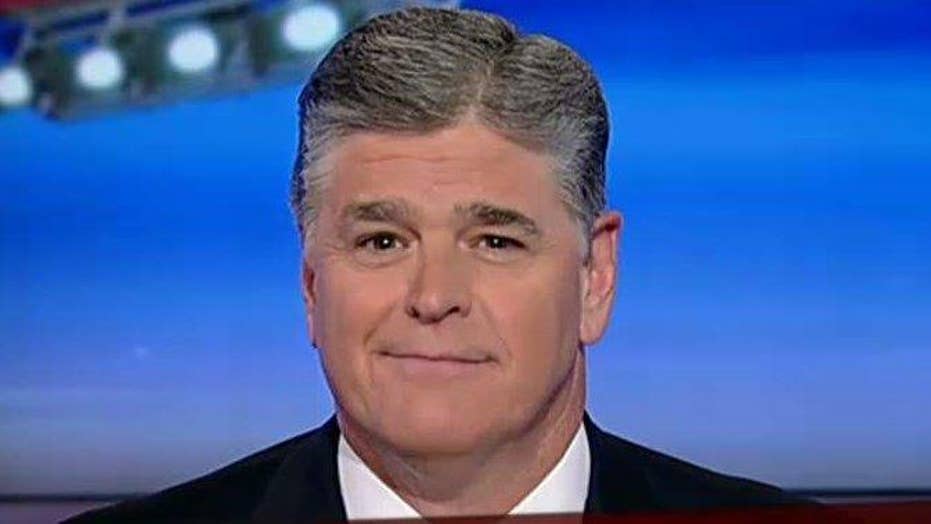 Hannity: Time to give Trump a chance to fix Obama's mess

Americans rejected the Obama-Clinton agenda because it doesn't work

President-elect Donald Trump’s alt-radical left critics are desperately trying to undermine his incoming administration as Friday’s inauguration approaches, with Hollywood blowhards, musical mediocrities and tedious TV talkers all getting in on the act.

Michael Moore, Alec Baldwin and Mark Ruffalo plan to join New York City mayor, Comrade Bill De Blasio, in a Big Apple protest that ought to warm the hearts of their friends on the left. But get this: According to the New York Post, their fellow liberals are worried the New York event might  overshadow all the events that they have planned in Washington, D.C.

Variety magazine is paying homage to the Trump haters with a cover featuring as many as they could round up. And then you have the band Green Day taking shots at the president-elect by putting out a video on Martin Luther King, Jr. Day.

And liberals over at "The View" are getting in on all the Trump-hating hysteria. They won't even say the president-elect's name.  These are the same people, by the way, who are talking about building walls around women's body parts and Trump-triggered "electile dysfunction" and much more.

“But let's talk about what's going on right now because the inauguration of a certain person is happening on Jan. 20,” “The View” host Joy Behar said on a recent show.

“He who shall not be named,” chimed in co-host Sunny Hostin.

“Right,” Behar replied. “It's happening on Jan. 20. And there are millions of people who did not vote for him and who feel frightened. I run into people all the time, ‘Joy, keep talking. We're scared. We don't know what to do.’"

Isn't it really time for these crybaby left-wingers to grow up, accept the fact that Donald Trump will be the 45th president and be gracious losers? These folks need to get a grip on reality and realize just how completely out of touch they are with the American people. It's the failed progressive policies of Obama and the alt-radical left that propelled Trump to victory.

Don't believe me? Look at how cities like Chicago, Detroit and Baltimore have been ruined by decades of big government, Democrat rule. So now we're supposed to listen to these same liberals and let them influence the rest of the country? I don't think so.

It's time for the elite left to get out of their little bubbles, off of their private jets and open their eyes for once to the electoral map’s sea of red in between California and New York. You have millions of people who live in the middle of the country, where all that red is.  And for eight years, we've had 13 million more Americans on food stamps, 8 million more in poverty. We have the lowest labor participation rate since the 1970s and lowest home ownership rate in 51 years.

The American people rejected the Obama-Clinton agenda because it doesn't work. It is time for celebrities to stop whining and fear mongering and give President-elect Donald Trump a chance to fix the mess that President Obama has left us.